Wealth and Poverty: In the Shadow of an Exclusive Club
Fifth Estate reprint, Summer 1991

Inside The Barclay Apartments

The Rich Eat The Poor 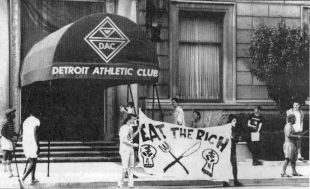 Anarchists picketing the posh downtown Detroit Athletic Club, June 1991. A few blocks away, grinding poverty exists today although most of the buildings described in the article have been cleared for condos. --photo: Mike

Members of Detroit’s exclusive men’s club stride up the walk bordered by an immaculate lawn and intricate floral patterns leading to the building’s entrance. Each of them displays the arrogance and bursting self-confidence wealth and privilege bestow upon the rich and powerful.

Inside, ostensibly the purpose is sports and health, but on the squash and handball courts, in the steam baths, on the massage tables, deals are cut, partnerships are made and broken, politicians bought and sold, economic decisions affecting an entire city or even a distant nation are decided upon. The old, elegant, cut-stone building, with its crystal chandeliers, leather furniture and deep pile rugs, is the venue for the men who constitute the city’s ruling class to gather.

Inside The Barclay Apartments

A scant three blocks away is a building which once exhibited a similar elegance in the era when the DAC was constructed.

It is now one of only three remaining structures on the block, the others having long ago met their demise beneath the wrecking ball. Inside the Barclay Apartments, the first floor windows are boarded, the plumbing is broken, and the gas was turned off two years ago.

In a third-story room, where Detroit’s bourgeoisie once supped, three young African Americans are arguing over possession of a rock of crack cocaine. As the dispute gets more heated, one of the men reaches behind his back for the .25 caliber automatic stuck in his belt which presses cold against his skin. The cops will be here soon.

All three will test positive for the HIV virus, but none knows it at the moment.

The one woman present is pregnant and her baby will be part of a statistic of infant mortality identical to those of who live in the slums of Mexico City’s hillside squatter villages. The men have less of a chance of reaching 40 years of age than do their counterparts in Bangladesh.

Rarely do those at the Barclay Apartments or the DAC think about the connection between each other’s social class, but each, in their poverty and in their wealth, create the other.

The Rich Eat The Poor

The rich and the poor, workers and owners, represent a profile of the American empire: a pyramid-shaped maldistribution of wealth based on the industrial plunder of the planet. The richest 10% of Americans own 83% of all personal wealth, while the rest of us share the remaining 17%.

The richest one-half percent of the population, the sector which personifies the ruling class, owns close to 50 percent of all privately held wealth, and it is this concentration which translates into political and social power. The life of opulence and leisure the rich lead, combined with their command position in the economy and politics, comes as a direct result of a system of looting. All they possess and control is at the expense of billions of workers and poor, both here and in the Third World.

The rich maintain a state of permanent class war against the poor. They are willing to kill to protect their wealth and privilege as they’ve done in Vietnam, Central America and most recently in the Middle East. Our vision of a free, ecologically sound world will never come to pass if we allow these planet-wreckers to continue in power. To them, we are nothing but dog meat for their industry and businesses, and cannonfodder for their wars.

We want to wipe the smug smiles off the faces of this selfish, swinish elite by challenging and destroying the rule of money and power. Our efforts for now may be small and isolated, but we intend to have them grow until the earth is free of this class of parasites.

One day, we will surely EAT THE RICH!