“Battle in Seattle”
Can a Hollywood fictional account of the 1999 anti-WTO demos do justice to their radical content?

Our reviewer (who was there) thinks it did a pretty good job!

It was with a mixture of anticipation and dread that I began watching actor Stuart Townsend’s directorial debut, Battle in Seattle. I took part in the 1999 protests against the World Trade Organization and participated in the spirited marches, the intersection take-overs, and the blockading of WTO delegates depicted so graphically in the film. 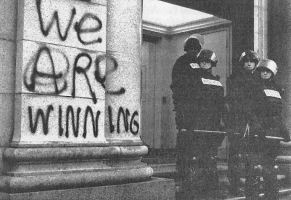 Woody Harrelson, as a Seattle tact squad cop, prepares to confront anti-WTO demonstrators, beside graffiti announcing the eventual outcome, which says “We are winning” with the letter a in the word “are” surrounded by a circle, forming a circle-A for anarchism.

The film captures those moments well. Those five unforgettable days were festive and inspirational, chaotic and scary, and definitely felt like revolution at times. Like the demonstrators in the film, I, and many others, were gassed and beaten by Seattle’s storm troopers during the street confrontations that eventually shut down the WTO meetings.

After almost ten years, the historic event barely remains in the consciousness of average Americans, even though tens of thousands of demonstrators brought the role that the WTO plays in the globalization of capitalism to public scrutiny. A film that could exit the radical ghetto of dialogue and debate over goals and tactics had not yet been made, though several excellent documentaries that pitched their message to anti-globalization activists have certainly been out for a while.

Townsend’s film is a departure from this trend of art for the movement. It draws its ability to bridge the gap between activist perception and mainstream understanding of world events through its deliberate use of a cast of characters drawn from types of people who took part in the events that week. The film comes close to the feel of a Greek tragedy, but refrains from having its actors fall into wooden roles through the use of newsreel footage mixed with warmly portrayed, compelling individuals.

Though the film raised several political concerns that warrant discussion, overall I was deeply moved by it and hopeful it will provide an engaging fictionalized account of this pivotal moment in radical history. Far from being an accurate historic document, Battle provides a popular platform for continuing dialogue in the larger society.

Aside from the part of the story we know, that the WTO came to Seattle in 1999 for a series of meetings only to be confronted by a loose affiliation of diverse organizations planning to shut them down, there are important, and interesting side stories. Some of the film’s storylines explain the activists’ motivations and personal histories. Another story attempts to explain away the brutality of the police as resulting from their exhaustion and frustration which supposedly surpassed their normal restraint and professionalism.

This is one aspect of the film that is not only factually erroneous--but dangerously naive. The police acted brutally almost immediately, using night sticks, gas, concussion grenades, and rubber bullets to break up non-violent marches, well before anarchists of the Black Bloc began smashing chain store windows. The property destruction caused by local residents enraged by being subjected to martial law conditions and by Black Bloc militants is cited as the cause of the State’s repressive tactics, though the property damage seen chronologically could more easily be viewed as a response to the State’s brutality.

Also, in humanizing the life of Harrel-son’s riot cop character, more so than any of the demonstrators, the role of the police as the defense mechanism of the state and the protectors of capital is hopelessly obscured. During a dramatic, but improbable scene following a confrontation between Harrelson (an Earth First! sympathizer and animal rights activist in real life) and a demonstrator, one could almost hear the cry of, “Can’t we all just get along?” Yet, Harrelson says in an interview, this was his favorite scene.

One of the more dramatic moments in the film takes place during an argument between someone breaking a window of a corporate chain store and one of the key organizers of the demonstration. In this angry exchange, the organizer shouts that “they” agreed to a policy of no violence. The angry black-clad radical shouts back that he never agreed to anything and this is “not violence!” as his action was against property, not persons.

This short but insightful summary of the ongoing “is property destruction violence?” debate in radical circles is definitely more than I would have expected in a film pitched to a mainstream audience.

The approach Townsend utilizes is very effective, with likeable, believable characters caught up in world events--some that they try to have influence on and some which act on their lives with dispassionate impunity, sometimes with disastrous consequences.

The casting is inspired, as Woody Harrelson (a riot cop) and Isaach de Bankole (an African trade minister) take roles that could easily be predictable and make them dignified, complex and poignantly real. The close-ups of Rade Sherbedzija’s face (portraying Dr. Maric, a member of Doctors Without Borders), as he waits for someone, anyone to come to his presentation on the unavailability of necessary medicines in poor nations is anguishing.

There are also moments of agony and tragedy, as people completely unaware of the WTO’s purpose or actions suffer injury and trauma. In particular, Charlize Theron portrays Ella, the wife of Harrelson’s character Dale, and knows nothing about the WTO. Ella is a sweet-natured and caring individual and is visibly shaken when a Black Bloc participant breaks a window in the Gap store where she is shopping for baby clothes, having never considered sweat shop conditions for children in other countries until that dramatic moment. Her later injury, ironically at the hands of police, is brilliantly performed and heart-wrenchingly painful.

Martin Henderson, as Jay, has the right amount of playfulness and presence to carry off his role as a central organizer and charismatic figure in the movement. The opening scene of an anti-WTO banner hanging on a construction crane high above the city is visually exciting.

Jay, Lou, Sam and Django, high up on the crane, hanging by ropes, illustrate the danger these committed activists are willing to risk to break through public complacency.

Michelle Rodriguez’s character, Lou, is a formidable combination of feisty, righteous anger and thoughtful humility. Andre Benjamin is mercurial as Django, a knowledgeable, but light-hearted street tactician and endangered species campaigner. His interactions with Rodriguez and the “turtle story” are sweet moments that help humanize the participants in the mass demonstrations and actions. Sam, played by Jennifer Carpenter, goes from a weepy and diffident legal advisor to a self-confident and ultimately triumphant legal defender.

It is worth noting Channing Tatum’s (as Johnson, a riot and undercover officer) performance as a boisterous and typically arrogant cop. Tatum turns to quiet reflection and bitterness after he is mistakenly beaten by other police officers while moving through the crowd undercover, trying to bring more tear gas to the barricades. The performances of Tzi Ma (as the governor) and Ray Liotta (as the mayor) are emotionally charged, though again, they get off easy in this film for their respective character’s responsibilities for what happened in Seattle.

Despite some factual errors and political shortcomings, I was happily surprised by this film. Craftily done, it is a powerfully moving evocation of a tremendous time in our history. The camera work is beautiful, dove-tailing newsreel film with the movie’s own brilliant simulated street scenes. The music forms an essential platform for the images, with strange combinations of mall-version Christmas carols and fleeing shoppers holding their noses from the fog of tear gas. The action sequences and mass demonstrations were elevated in intensity by Robert Del Naja and Neil Davidge’s use of on-point and energizing sound.

The film closes with a striking montage of footage taken from several anti-globalization protests around the world, some of which (DC, Cancun, Miami) I also participated in. These images, taken together, pull the movie outward into the world, just as the cast of characters had previously brought it inward to a human-scale story.

The closing line displayed on the screen, “The battle continues,” is a rallying cry I never expected to hear from a film geared towards mainstream audiences.

La Lucha continua, and even Hollywood knows it.

FE Note: Some movement organizers of the 1999 WTO protests, as well as several radical participants, object to the film’s portrayal of events. One, David Solnit, a long-time friend of this publication, whose articles have appeared in our pages, attempted to work with director Stuart Townsend prior to filming, but his script suggestions were rebuffed.

We recommend looking at David’s site (www.realbattleinseattle.org) for a critique of the film and his ongoing effort to keep the event relevant.

Also, the movie’s official web site, battleinseattlemovie.com, is organizing grassroots campaigns to bring it to more screens and contains the story of the film and the WTO.