A Communique from the Krewe of Eris 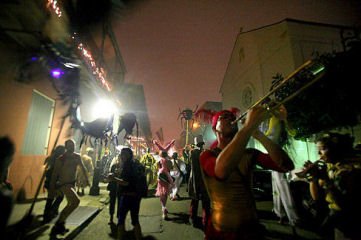 Chaos is a dragon. The dragon’s heart beats with the tides, the rhythm of the dance, the thump of the bass. Her blood flows as the rivers & the creeks, the trade winds, the migrations of people and animals, the waste streams of our cities. Her breath is the humid air, the song, the smoke from the factories.

A flick of her tail creates vortexes, revolutions, hurricanes and tsunamis. Her claws churn the earth, burying and unearthing civilizations, turning this compost, causing seeds to grow. Her scales are fields of flowers, leaves turning in the wind, the face of a lover, reflections in hubcaps, the images on TV screens. Her thoughts are the laws of nature and her eyes are the Krewe of Eris.

Eris, twin sister of Ares, daughter of Hera, conceived when her mother touched “a certain flower,” the notorious Blackthorn. Troublemaker of the gods, Eris’ passion is to disrupt the status quo and undermine the smug superiority of the Olympian upper crust. Daring and reckless, Eris tossed her golden apple, inscribed with the words “To the fairest,” into a wedding party to which she was not invited, instigating a rivalry between Hera, Athena, and Aphrodite that would ultimately lead to the Trojan War and the epic poems of Homer. Eris, the red-headed stepchild with the power to reverse the movement of the planets, leads the return of the repressed, the oppressed, and the suppressed against all crusty and malignant orders.

Eris has infinite manifestations; only a few bear her name. In New Orleans the Krewe of Eris keeps constant communion with the goddess and is resolved to do her bidding. Beyond even following her orders, the krewe rejects all orders and acts directly as an avatar of our wily patroness, fluid embodiment of miraculous disorder, identifying especially with the all-seeing kaleidoscopic eyes of the dragon herself. The torch passed down through the generations, and taking different forms as called to different historical necessities, our krewe now manifests as a procession of noisy and mischievous underdoggery that upstages, upsets, and overturns the normally sedate bedlam and inanity of carnival on an off-night, taking the masses by surprise, catching them with their pants down by arriving through their back door.

The legendary call of Eris is as seductive as the Siren’s song. However, for the music of Eris New Orleanians eagerly remove the wax from their ears and become willingly enchanted. Equal parts sight, sound, smell, and who-knows-what, Eris emerges as a resplendent rag-tag legion of several score, dazzling to the eye and blaring dark & joyful noise, whose forces quickly grow to gargantuan size, a dragon whose tail trails many city blocks behind its head, and whose body contains whole worlds and histories, mappable realms of interlocking cultures. Eris, the pied piper, winding her way through the nether regions of the French Quarter-her pheromones smell of Chartreuse, firecrackers, and apocrine sweat.

Eris carouses unseen under the noses of the police. She clashes with militant Christians and Bourbon Street drunks and remains unconquered. Eris flirts with disarray, flirts with disaster, flirts with disgrace and with not-so-distant cousins, but does not disperse until she deposits her people at the Elysian Fields.

To those who follow her lead, and to those who require the medicine only she can dispense, Eris is nurturing in surprising ways. She hoisted the flag of Limbo over a city wrecked by hurricane Katrina. She discovered a planet, bigger than Pluto, named after herself to act as a further--much further--outpost of Erisian culture. What will she do next? What new gesture will please the goddess of disobedience and discord? Eris knows that everything is not enough. We are her avatars, and we are up to the task.

Ladies and gentlemen, you are entering Planet Eris. Be careful: You might get wet! Eris is over 40% water and other fluids. Flowing freely, she lubricates boundaries in space. Remember: We are on the edge of the solar system, so we have always encountered visitors.

Eris: Welcome mat of the galaxy!

Shall we have relations?

We are always fond of your “Planet Earth” and don’t forget: co-mingling, with Eris, is a pastime. But really, we are preoccupied with ourselves. Life on Planet Eris is extremely absorbing. But now with your Hubble, you have seen us. We have been discovered, and now must be known. And more: now that we see Earth up close, we see it is too much. We have to do something.

Eris is inviting: we are inviting you! This Garden of Erisian Delights specifically beckons all to join our cock-eyed romp through the universe. Did you know that Planet Eris has over 10,000 orifices that offer delights to the casual or persistent explorer? When Eris breathes, her orifices wail. Perhaps you’ve heard the music of humans, but have you heard the music of Eris? Listen.

Eris contains history known since antiquity. As you travel through our many lands and seas, you will notice the orgy of cultures, creatures, unusual protuberances, and colorful facades that give Eris her reputation as “Smorgasbord of the Kuiper Belt.° From the La Brea Carpet, cross the land bridge to the Crypto-zoological preserve. You will find the residents dazzling, mysterious, and unpredictable. Then, become a pilgrim to the Eye Sea, but remember When you look into the Eye Sea, the Eye Sea looks into you. And when you dive into the Eye Sea....?? Ride the legendary Coco de Mer. Set sail across the Sea of Milk & Honey. Have bon voyage to our Nouveau limbeaux. Sample the Big Rock Candy Mountain. Strike it rich at the Chartreuse Mine. Bring your friends to Wingnut Grotto! And this is just a short list--who wants to spill our beans?! On Eris there are more places & peoples than can cover the planet. This is possible because our realms overlap and sit atop each other. No other trans-Neptunian object has so much co-mingling, and so many orifices!!

Come into Eris and find us charming, rewarding, excitable, and queer. Mounting cloud and sky to ride the sun and moon, we wander beyond the four seas. Eris is our festivity. You like it!

Shall we have relations?

Because we are foreign to your Earth, It Is a challenge to make sense of your words. We are attempting communication but English is careless and doubtful. Please, friends, excuse us.

In fall of 2005, Pope Benedict XVI announced his plan to eliminate Limbo.

Limbo, neither Heaven nor Hell--the place of souls whose future is unknown. Traditionally home to “unsaved” infants, feral children, cavemen, worthy heathens, virtuous pagans, household pets, old-testament prophets, taoist sages, the Buddha, and all those devoted neither to good nor evil, this legendary realm has, with one heartless edict, been cast aside.

Eris, the magnanimous, the opportunistic, keen-eyed and shrewd of mischief, answers this declaration with another, more powerful one: “What the Pope does not want I will gladly embrace!”

The krewe of Eris welcomes all the denizens of Limbo, and all ye of uncertain fate, all those between worlds, to celebrate the arrival of Limbo this Mardi Gras. Welcome home.