A police and FBI raid of the Long Haul Infoshop in Berkeley, Calif. August 27--supposedly to figure out who might have sent threatening emails to University of California animal researchers traced back to the Long Haul internet connection--succeeded in seizing 14 computers from the Long Haul, but failed to break the spirit of Berkeley activists. 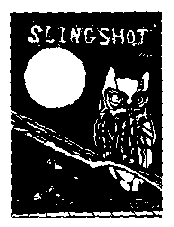 No one was at Long Haul at the time of the raid and as of press time, no one has been arrested for any crime related to the raid. Seven officers with guns drawn executed an extremely broad search warrant against the volunteer-run library and radical community center. They included University of California police, a county sheriff, and one federal agent--all members of a joint terrorism task force, according to University of California spokesperson Mitch Celaya.

Police broke locks on doors inside the Infoshop and searched files for an hour and a half while a crowd milled outside. Police eventually seized all computers inside, including computers used for a public access internet room and computers used by the Slingshot publishing collective.

Long Haul opened to the public as usual the night of the raid, although the public access computer room remained closed for three weeks after the raid while volunteers gathered replacement computers and sought to improve computer privacy measures.

A statement of probable cause submitted by UCPD officer Kasiske to obtain the search warrant lists six allegedly threatening email messages sent from a computer connected to the Long Haul DSL line to UC researchers in June.

The police obtained records from Long Haul’s ISP as well as Google tracing emails sent from gmail accounts accessed through the Long Haul DSL line. The warrant application discusses recent home demonstrations at UC Berkeley and implies that they are linked with two firebombings against animal researchers in Santa Cruz on August 2. The application also mentions the Animal Liberation Front.

Given that the purportedly illegal threatening emails were sent from a public computer in June and that the raid was in August--with hundreds of people visiting Long Haul during that time--one might think that trying to find a particular person who sent six emails would be like looking for a needle in a haystack. Was the police’s real purpose to find a suspect? Or to disrupt a known radical community center and conduct a fishing expedition of computer information from hundreds of people who used Long Haul computers unrelated to any threatening emails?

It was sheer luck that the Slingshot collective wasn’t right in the middle of making the 2009 Organizer or an issue of the paper at the time of the raid. If that had been the case, the raid could have set Slingshot collective back weeks. As it was, just a few articles and other documents were lost.

It does not appear that the police got a copy of the Slingshot mailing list (for sending out papers) or other sensitive Long Haul information. Most of that information was kept at another location on different computers.

This arrangement was partly for ease of access--the Slingshot mailing operation does not run out of Long Haul--and partly out of security concerns at Long Haul. Prior to the police raid, Long Haul has been subject to half a dozen burglaries of uncertain origin.

Several dozen lawyers volunteered to help Long Haul respond to the raid, including excellent activist lawyers from the National Lawyers Guild and heavy hitters from the Electronic Frontier Foundation and the American Civil Liberties Union.

As anarchist-oriented folks who are skeptical of bourgeois, mainstream legal solutions to problems, the Long Haul crew had a great discussion of the merits of using the court system to defend Long Haul against the police raid.

The discussion concluded that while the best anarchist, direct action response is to continue the struggle in the streets and for hearts and minds, bourgeois legal action--along with protests and media action--may be a tool open to Long Haul. Generally, Long Haulers want to do what they can so this kind of raid doesn’t happen to any other infoshops in the future. That means Long Haul wants to expose the flimsy grounds for the raid and make the raid as expensive, embarrassing and inconvenient for the police as possible.

The real danger may still be on the horizon. Given the ongoing police investigation of animal rights activity, the Berkeley radical scene is preparing in case the police make further raids, speak to local activists, make arrests, or subpoena anyone before a Grand Jury. The raid at Long Haul was followed only days later by raids in Minneapolis/St. Paul against activists involved in the Republican National Convention there.

Harassment of the Long Haul failed to stop the current Slingshot from hitting the streets. The legendary Slingshot Organizer is also available for 2009. Visit http://slingshot.tao.ca/.