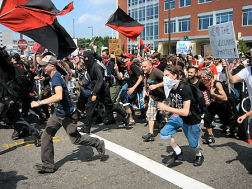 During four days in September, the Republican Party held its national convention in the Excel Energy Center in Saint Paul, Minnesota. In the style of 21st century capitalism, these party conventions are almost entirely virtual: media spectacles complete with bright lights, hokey sets, and lots of the red, white, and blue; an imaginary world occupied by creepy mannequins with stiff smiles.

But counter-conventions have become a lively adjunct to these otherwise boring State rituals. The anarchist response to the RNC had been planned for over a year. The counter-convention was steered by residents of Minneapolis-St. Paul, with a local group called the RNC Welcoming Committee (RNCWC) providing both the organizational framework and the convergence space. Coordinating with the RNCWC, regional organizers around the country brought thousands to contest the convention, outnumbering the Republican delegates and disrupting their media event with a diverse array of tactics. 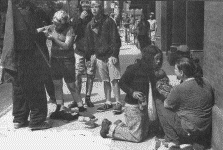 By late August, many activists had arrived to put this strategy in place. But in the days leading up to the convention, Ramsey County Sheriff Bob Fletcher unleashed a series of preemptive raids. First to be hit was an encampment on Harriet Island, followed by the RNCWC’s convergence center, and a number of private residences.

With a warrant to search for bomb-making materials, deputies had burst into the convergence center and seized anything that could have conceivably fit the bill: notably, kitchen spices and buckets of shit and piss. Using the hoary trope of “self-described anarchists,” Sheriff Bob Fletcher claimed to have information that “these things were going to be used as weapons.” Fletcher described the raids as a strike against the RNCWC. If this had been an attempt to break the spirit or effectiveness of the anarchists, it failed.

Disturbingly, the search warrants used in these raids had been based on information from paid informants who had infiltrated the RNCWC on behalf of various law enforcement agencies. The informants claimed that members of the group planned to kidnap delegates to the RNC, assault police officers with firebombs and explosives, and sabotage airports in St. Paul--in short, a plan that would sound farfetched to even the most militant anarchist.

The FBI’s Joint Terrorism Taskforce had been recruiting informants in St. Paul (and elsewhere) earlier in the year, hoping to first infiltrate the world of “vegan potlucks” and work their way into the revolutionary hard core. While this effort was widely known and lampooned, some of the informants were clearly successful, which should give us even more concern about the quality of our “security culture.”

On the first day of the convention, a legal parade of about 10,000 marched through the streets of St. Paul. At the same time, anarchist cells attempted to keep delegates out of the Excel Center. The RNCWC utilized a strategy of “Swarm, Seize, and Stay,” dividing St. Paul into seven sectors and attempting to shut down highway ramps and major intersections in each of them.

These actions were effective for a time, but were met with extreme violence from the police. There are countless reports of beatings with batons; the use of tear gas, pepper spray, rubber bullets, and concussion grenades; and the arrests of medics, bystanders, and credentialed members of the media (including not only the usual suspects like the Democracy Now! team, but also journalists from the Associated Press and the Chicago Tribune); and mass arrests that included children and the elderly.

More “swarm” than “stay,” various black bloc groups marched and rioted, destroying police cars and some selected windows. Anarchists fought back against the police in close quarters with some success. Perhaps because these actions were carried out throughout the city simultaneously, the local police were stretched thin. Eventually, the National Guard were called in.

By the end of the day, almost 300 had been arrested. Among them were eight RNCWC organizers, who were charged with Conspiracy to Riot in Furtherance of Terrorism. Monica Bicking, Eryn Trimmer, Luce Guillen Givins, Erik Oseland, Nathanael Secor, Robert Czernik, Garrett Fitzgerald, and Max Spector, each face up to 7-1/2 years in prison under the terrorism enhancement charge of Minnesota’s version of the Patriot Act.

Regardless of law enforcement’s efforts, marches, riots, dance parties, and other disturbances continued throughout the convention. By the end of the four days, about 800 people had been arrested. When McCain was finally nominated, he was repeatedly interrupted by activists from Iraq Veterans Against the War and Code Pink. While the Republican nominee grinned sheepishly, delegates shouted down protesters with chants of “USA, USA.”

As with any mass action, the counter-convention had its strengths and weaknesses, its victories and defeats, which are being analyzed and debated. But those who walked away from St. Paul this September left with a feeling of the continued power and relevance of anarchist direct action. Those who didn’t get to walk away, especially those residents of St. Paul who have had their freedom taken away for the roles they played, deserve our gratitude and our support.