Our Hearts Never Hibernate, Neither Does The State
An Update on the RNC 8

The RNC 8 are eight activists from Minneapolis/St. Paul, Minnesota charged with four felony counts of conspiracy, two with “Terrorism Enhancements,” in the first known use of the Minnesota Anti Terrorism Act of 2002 (dubbed the MN PATRIOT Act), for their organizing in response to the 2008 Republican National Convention (RNC). 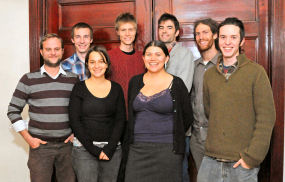 Conspiracy charges are a method of preemptive law enforcement that punishes thought and attempts to judge criminal intent. A “crime,” as it is commonly understood, need not have been committed to bring these charges.

These arrests were preemptive, targeting known organizers in an attempt to derail 2008 anti-RNC protests in St. Paul before the convention had even begun. (See also Summer and Fall 2008 Fifth Estate.)

In the aftermath, the RNC 8 are meandering their way through the state apparatus known as the “justice” system with the judge hearing prosecution and defense motions. As of this writing, rulings have not been handed down. Trials may begin within a few months.

Outside the courtroom the RNC 8 Support Committee coordinated with national allies for a Day of Solidarity with the RNC 8 on March 28. Locally, there is a newly created RNC 8 Defense Committee formed to build a broader base of support for our common struggles, such as repealing the Minnesota PATRIOT Act.

As the RNC 8 themselves wrote, “The best solidarity is to keep the struggle going, and we hope that supporting us can be a small part of broader movements for social change.”