Franklin Rosemont, 1944–2009
“A stranger to neither love nor laughter” 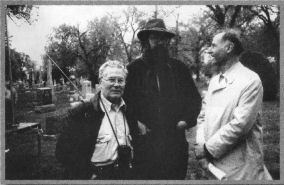 Writer, painter, and publisher Franklin Rosemont died on April 12 in Chicago. He was buried in a private ceremony some forty feet from the Haymarket Monument in Waldheim Cemetery amid the graves and scattered ashes of Fred W. Thompson, Emma Goldman, Ben Reitman, Lucy Parsons, Nina Van Zandt Spies, Slim Brundage, Voltairine de Cleyre, and a number of other subversives and Wobblies.

For the last thirty years, he and his partner and comrade Penelope Rosemont have been the driving force behind the Charles H. Kerr Company, a 124 year-old revolutionary socialist and radical labor history publishing house whose titles on the Haymarket anarchists and the Industrial Workers of the World are familiar to many Fifth Estate readers.

The two are also known for their part in the radiating nucleus of the Chicago Surrealist Group, which was founded with blues historian Paul Garon and a small circle of similarly-minded rapscallions and malcontents after the Rosemonts visited with poet Andre Breton and the Paris surrealists in early 1966.

Rosemont’s research into the International Working People’s Association’s “Chicago Idea” anarchism of the nineteenth century led him through 1001 nights of half-forgotten stories about the IWW, early twentieth-century Chicago free-speech hobohemian subcultures (Bughouse Square, the Dil Pickle Club, and the College of Complexes), and the overlooked anarchist threads woven into and braided around the Beats, SDS, and the Black Power movement, all of which he pieced together like Shahrazad.

He was always on the look-out for tales about long-lost trouble-makers, yet managed to avoid the heroin of nostalgia by applying a passional calculus to his research that turned historical timelines into new trajectories of dissidence. Tomorrow was always much more interesting to Rosemont than yesterday.

His 2003 study Joe Hill, The IWW and the Making of a Revolutionary Working-class Counterculture (reviewed in Summer 2003 FE) is a magnum opus in this regard--it is an exhaustive, free-associative assemblage of information about Hill and old-school Wobblies, but it also issues an urgent challenge for new connections and directions to today’s generation of rebels, slackers, utopians, oneironauts, and lovers of the weird and the wayward.

Stubbornly and inseparably fused to his interests in anarchist history, theory and practice was Rosemont’s devotion to surrealism. Rosemont was passionately committed to deepening and broadening discussions of emancipatory social revolution through sustained considerations of a surrealist revolution. He tirelessly argued that surrealist experiments with the accidental sorceries of poetry, desire, humor, love, surprise, and the free play of the imagination were absolutely critical for convulsively articulating the multiple crises of consciousness latent in the contradictions that infest all capitalist societies.

“The provocation of such a crisis seems to us, as surrealists, to offer the most dynamic, fertile, and prehensile means of serving the cause of human emancipation,” he wrote in his 1971 chapbook of automatic texts, The Apple of the Automatic Zebra’s Eye.

He produced a number of books to illustrate the mutual and reciprocal dynamics between radical freedom and surrealism, like his bold, unapologetically partisan collection of the selected writings of Andre Breton, What is Surrealism? (first published in 1978); The Forecast Is Hot!: Tracts & Other Collective Declarations of the Surrealist Movement in the United States, 1966–1976 (1997, co-edited with Penelope Rosemont and Paul Garon); Surrealist Subversions: Rants, Writings and Images by the Surrealist Movement of the United States (2002, co-edited with Ron Sakolsky for Autonomedia); Revolution in the Service of the Marvelous: Surrealist Contributions to the Critique of Miserabilism (2004); and Jacques Vaché and the Roots of Surrealism (2007).

Throughout it all, he steadfastly contended that--despite the formidable formaldehyde pumped out by art dealers, college professors, museum curators, and all the other commissars of the rational, the sensible, and the politically correct--surrealism remains no more obsolete and irrelevant today than does workplace sabotage: “What remains for surrealism to do far exceeds what surrealism has done,” he often said. “Surrealism can be superseded only by more surrealism.”

Among the most compelling of his many contributions to the development of surrealism were his relentless analyses of miserabilism, “the outright glorification of misery for misery’s sake.” In 1956, Andre Breton wrote a brief essay called “Down with Miserabilism!” for a left-wing French newspaper; his article identified the continued “depreciation of reality in place of its exaltation” as the most lasting of fascism’s and Stalinism’s toxic ideological legacies.

Breton was reacting specifically to the dismal fads of existentialism and abstract expressionism, but a decade later Rosemont locked onto this idea and pushed it further, exploring and expanding it as a more generalized “rationalization of the unlivable” that Marx first recognized in Capital as a by-product of the escalating accumulation of wealth.

Franklin was intrigued by the writing of the Frankfurt School philosopher (and veteran of the 1919 Spartacist general strike in Berlin) Herbert Marcuse, and through correspondence with Marcuse during the 1970s, he used some of these ideas to fill out his thinking on miserabilism.

“Surplus repression” (the repressive force left over from the minimum needed to maintain law-‘n’-order in a society which is then used solely to further the power and privileges of a parasitic ruling elite) and “repressive desublimation” (a cretinizing fear of one’s own freedom that leads to sacrificing liberties to authority in exchange for immediate, material comforts) were two specific notions of Marcuse’s social criticism that became acutely germane to understanding miserabilism and to its associated regimes of malevolently sterile realisms.

For his part, Marcuse found the Chicago Surrealist Group’s critical efforts “rare examples of how mad humor can turn into radically political truth.”

Rosemont’s conceptualization of miserabilism perfectly captures the ugly hegemonic ambitions of the Elmer Fudds of everyday life who clear-cut the wilderness of language in order to build parking lots of the mind: bureaucrats, military spokesmen, newscasters, political party activists, reality television programmers, stockbrokers, sycophantic celebrity-cult promoters, sports talk-radio hosts, corporate poetry-festival organizers, preachers of all denominations, and anyone else who mummifies ideas and experiences with debased and debasing police languages.

These pushers and junkies of alienation, commodity fetishism, and unfreedom spray clouds of chaff and static into the environment to jam our magnetic awareness of the deep dialectical interplay between inner and external realities.

You will know these dull, small-minded wretches by their demands that you be reasonable, realistic, and practical, and by their stipulation that you do so only by accepting whatever narrow choice of superficial options have been made available.

For anarchists, Rosemont’s studies of the surrealists’ vandalizing adventures against miserabilism deserve a closer look. Not only does the critique of miserabilism help to identify the more subtly pernicious ways that respect for authority, piety, patriotism, guilt, inhibition, patriarchal prejudice, remorse, bad faith, and white privilege perpetuate capitalist domination, but it also helps to locate those elements within the anti-capitalist community and within ourselves.

Preferring the tedious socialist realism of protest marches and the choking character armor of sensitivity training to the glorious goofing-off of kite-flying and late-night skinny-dipping, the disciplinary conventions of thought and language held by the self-renunciating, self-righteous anarcho-moralizer is every bit as counter-revolutionary as the liberal’s ballot-box, the riot cop’s baton, the priest’s prayer, and the boss’s time-clock. “Surrealism could be described as the art of refusing, escaping from, overturning, and abolishing the Reality Principle’s enclosures: ideological and psychological enclosures as well as physical,” Rosemont wrote a few years ago.

“And, that is why Houdini’s old watchword ‘Love laughs at locksmiths’--popularized by Buster Keaton--is still an appropriate riposte to the miserabilist apologists for incarceration in all its forms: prison, work, high school, church, consumerism, the armed services, or life in the suburbs.”

A stranger to neither love nor laughter himself, Rosemont’s audacious certainty that poetry is a largely unexplored yet vital means of igniting revolutionary consciousness will continue to serve the cause of surrealism, anarchy, and freedom for some time to come.

For a complete catalog of books by Franklin Rosemont and other titles on labor, surrealism, and radicalism visit the site of Charles H Kerr Books www.charleshkerr.com.