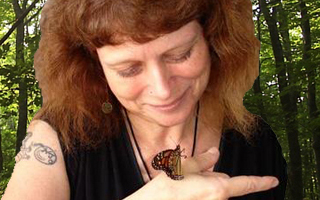 Marie Mason, a long-time Fifth Estate contributor, sentenced in February to almost 22-years in prison following a guilty plea for two acts of property destruction on behalf of the environment, is now an inmate at the Waseca federal prison, 75 miles south of Minneapolis. (See Fifth Estate #380, Spring 2009).

Marie is serving the longest sentence of any Green Scare arrestee. (Jeffrey “Free” Luers originally received over 22 years for torching SUVs in Eugene, Ore., but on appeal his sentence was reduced to ten years and he will be released in December.) Marie’s lawyer is currently appealing her sentence on the grounds of its wildly disproportionate severity.

Federal officials have also waged a dirty war against her family, alternately harassing her mother, daughter, and son, as well as one of her ex-partners.

Supporters such as the Civil Liberties Defense Center (CLDC) and members of the IWW have held benefits for her in Eugene, Portland the Twin Cities, and Ann Arbor. Movement singer/songwriter, David Rovics, frequently dedicates his song, “A Kiss Behind the Barricades” to her at his concerts.

Web Archive update 2-11-2019: for the above, see https://supportmariusmason.org/

The following interview was conducted via letters in June. Since the interview, Marie is now working as a guitar instructor and is no longer toiling in the prison kitchen.

MARIE MASON: We are awakened at 6:00am by lights and loudspeakers to get ready for work at 7:00 or 7:30am jobs. My job doesn’t start until 10 am scrubbing pots and pans in the kitchen.

Still, I have to be up, bed made military style, and present for census count. I usually shower, dress for work in my green park ranger uniform (ironic after so many meetings with Departments of Natural Resources in Michigan and Indiana officials), and write or read or do laundry until my work call.

Work is physically hard (water’s boiling, soap and steel wool rip up fingernails and fingers), pots are huge and heavy and hundreds of pans to carry, clean, and carry again. My crew is a three or four woman team (there are 650 inmates here with a goal of 1200) and we work using English and Spanish, as half of us speak each language.

After work, I go to the recreation center and try to do two miles a day or more of brisk walking on the fenced-in track and bike three miles. I check out a guitar and play for an hour and then go outside and watch the sunset from a picnic table.

Back at the unit, it’s possible to socialize, watch a movie, read, or do hobby crafts. I knit, crochet, and do beadwork. Lights go out and quiet hours are in effect at 10 pm, but we’re allowed to play cards, talk, or watch TV until 11:30 in the television rooms.

The weekends are a little more relaxed and we can sleep until 7:00am and can wear sweats all day. It’s mainly on those days that I get caught up on correspondence and draw.

FE: How do you get along with the other prisoners?

MM: I have friendly working relationships with other inmates because I always do my share and then some. Not to mention a healthy does of IWW-style solidarity. I help new folks get situated on the unit, just as another inmate helped me until money was accessible in my prison account. I’ve made a lot of friends this way. Other inmates listen to me play the guitar and I give lessons to a few.

Some women were predatory as a coping mechanism on the outside and they continue that behavior in here. It’s pretty easy to spot this and to avoid it/them. You just have to put up boundaries.

I do a lot for some people, and they, in turn, share with others and me when they can. If it’s a parasitic relationship, it’s short-lived.

I help non-English speakers with translation difficulties and with official paperwork, and help inmates prepare for GED and ESL tests.

FE: Do the other prisoners know what you are imprisoned for?

MM: Quite a few do including all of the women on my range and at my work in the kitchen. Generally, they think it’s a bum rap that I got so much time. Lots of women seem willing to consider the idea of economic sabotage as a political strategy, although there have been a couple who balk at any attack on private property (“You just can’t blow other people’s shit up, K.B.”) K.B. is short for “ka-boom!,” and what some of the inmates call me.

Still, I get interest and sympathy that I wasn’t expecting, although there was one person who thought I made it all up and was just a schizophrenic. that was a great conversation!

FE: You’re a vegan and had trouble receiving a proper diet in the county lock-ups before you were transferred to the federal system. Are your dietary needs being met, and how is the food?

MM: this is a toughy although the short answers are, no, and, not so great. But, a more complete answer is that it is closer then I would have thought. I am the only vegan here, unlike the Danbury, Conn. federal facility which is set up for folks like me and has soy every day since they have quite a few vegan prisoners.

Given that, there’s usually beans and rice here, or soy, but not always and sometimes not for days. That means I can eat around the corners, as I call it. Maybe there’s a baked potato or a non-dairy-based dressing for the salad. Thin pickins though.

FE: What is the best way for people on the outside to support you?

MM: The sad thing is how much I’ve learned now about support from the other side of the fence (I used to work with Anarchist Black Cross and Books for Prisoners in Detroit and elsewhere). Patience and perseverance are so important. Please be patient if a prisoner doesn’t write you back immediately. Like me, there may be a delay in getting mail, getting stamps, or the sheer volume of support mail may ‘overwhelm an inmate. I’m only allowed 20 stamps a week and I buy that many each week.

Also, please know that letters about your life, your campaigns, and your interests are a wonderful and appreciated lifeline. Remember that all mail going in and coming out is read, so neither of us can/should say anything that would cause problems for either of us.

Books are wonderful and I share everything here, first on the unit and then with the library. Pictures of nature or animals, friends, campsites, demos, tree sits are all good as long as it’s ok with the people in the photo and doesn’t depict illegal activity.