In a writing career spanning nearly five decades, Ursula K. Le Guin has pushed the boundaries of fiction, transcending genre and style conventions to create a unique and distinctive literary voice. Her groundbreaking novels and stories have questioned gender constructions, challenging our notions about gender and identity, imagined an anarchist utopia, wrestled with ideas of free will and destiny, and subtly made commentary about race and race relations. At various times throughout her career critics have labeled Le Guin and her works feminist, anarchist, Taoist, and other labels, but they are both all of these and none of these things simultaneously. What is clearer than the labels of critics is her ability to think critically and turn that thought into finely wrought literature. 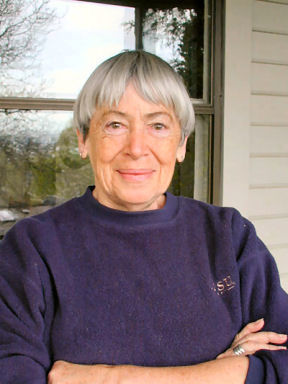 She was born in 1929 and raised in Berkeley California. Her parents were the writer Theodora Kroeber, author of Ishi in Two Worlds, and the anthropologist Alfred L. Kroeber. She credits her inspiration for wanting to be a writer to learning to write at the age of five. Young Ursula attended public schools and on her website, she describes her childhood as “‘happy,’”

“My parents were loving, kind, and intelligent; I had an extra mother in my great-aunt; I had three big brothers to tag around Ifter (and to have fights with the youngest of them); and everybody in the family was glad I was a girl, which made me able to be glad to be a woman, eventually.”

Despite the Great Depression of the ‘30s, her family was well off thanks to her father’s work as a university professor, and their Berkeley home was a vibrant center for intellectual life.

“There were lots of visitors, lots of talk and argument and discussion about everything, lots of books around, lots of music and story-telling. The life of the mind can be a very lively one. I was brought up to think and to question and to enjoy.”

In this setting she pursued her interest in writing, with the understanding that as she approached college-age that she look to college as a tool to obtain “‘a salable skill’--learning a trade that [she] could live on.” To this end, she attended Radcliffe College, earning her B.A. in 1951, and went on to study French and Italian Renaissance literature at Columbia University, earning her M.A. in 1952.

In 1953 she met and married historian Charles A. Le Guin in Paris, and together they moved to Portland, Oregon in 1958.

In 1966 Ace published her first novel, Rocannon’s World, based on a 1964 short story first published in Amazing Stories and collected in A Wind’s Twelve Quarters (Harper & Row 1975) with the title “Semley’s Necklace.” A follow up set in the same universe, Planet of Exile (Ace) followed later that year, and a third novel, City of Illusion (Ace 1967) followed a year later. The three books mark the beginning of what some fans, critics, and publishers have dubbed the Hainish Cycle, or the Ekumen Saga, or series. Though Le Guin does not consider them part of a series because they do not “form a coherent history,” she admits that there are connections between the books. Tor books reissued the three novels in 1998 in one volume as Worlds of Exile and Illusion.

A Wizard of Earthsea, published by Parnassus/Houghton Mifflin in 1968, was the first book in what would become the Earthsea series in the ‘70s, and really is a series, meant to be read in the order written, because in Le Guin’s words on her website, “it is all one story.” Before she would continue the Earthsea series in the ‘70s, though, Le Guin would write and in 1969 publish one of her most widely known and regarded works, The Left Hand of Darkness (Walker 1969, Ace 1969).

In Left Hand, Le Guin imagines the alien planet of Gethen/Winter, a world in which all the people are androgynes, capable of developing into either sex during the peak of their sexual cycle, a period known as Kemmer. Gethen is a world without gender or socio-sexual roles, but it does hold to a strict code of social and political conduct--shifgrethor--to which all members of society are beholden. To this world comes Genly Ai, an emissary from the Ekumen, an alliance of human worlds who has come to Gethen to convince the world to join the Ekumen. Genly must confront not only his own gender biases, but navigate the complex code of shifgrethor, and the numerous layers of political intrigue that surround him. The novel was a masterpiece, and won both of science fiction’s top awards for 1970, the Hugo and the Nebula awards, of which Harlan Ellison wrote in Again Dangerous Visions: “no award in that category [novel] in recent years has done the Nebula--or Hugo --more credit.”

In the ‘70s Le Guin continued to write and publish at a furious pace, with a new novel nearly every year. She wrote two sequels to A Wizard of Earthsea, The Tombs of Atuan (Atheneum) in 1970 and The Farthest Shore (Atheneum) in 1972, creating one of the most celebrated and widely read fantasy trilogies since Tolkien’s Lord of the Rings. The year between the two Earthsea sequels, Le Guin published The Lathe of Heaven (Scribners 1971), an alternate-reality story neatly meshed with elements of Taoist philosophy.

In the middle of writing these three novels, the idea for a new story began germinating that tied into Le Guin’s reading of all the pacifist-anarchist literature available in English at the time (See Verbal Dance: an Interview with Ursula K Le Guin in this issue for more). This idea developed into perhaps her most well-known novel, The Dispossessed (Harper 1974), the story of a brilliant scientist at odds with his utopian anarchist society. The novel is one of the best, if not the best, fictional realization of an anarchist society as it might be practiced, and remains one of the most influential modern utopian novels written. The Dispossessed was awarded both the Hugo and Nebula awards for its year, making Le Guin the first author to win both awards twice for novels. Le Guin published several more novels and stories before decade’s end, and her first book of essays, The Language of the Night (Putnam) in 1979.

Since the ‘70s Le Guin has continued to put out a constant stream of new material, from novels to poetry, translations, and books for children. In 1983, Harper published The Eye of the Heron, a novel about a society of pacifists inspired by the life and writings of Gandhi. Always Coming Home (Harper 1985), an experimental work mixing elements of narrative, anthropological study, poetry, songs, and art, to depict the culture and lifestyle of Kesh, a people living in the Pacific Northwest in a far distant future, followed.

In 1989, she published her second book of essays and criticism, Dancing at the Edge of the World (Grove), which included the essay, “A Non-Euclidean View of California as a Cold Place to Be,” reprinted in this issue. That same year she published the children’s book Catwings (Orchard), the first of four books in a series, all illustrated by J. Schindler.

Her most recent novel is Lavinia, published by Harcourt in 2008. The title character of the novel is a minor character from Virgil’s epic poem the Aeneid, who had no speaking lines in the poem. The novel won the 2009 Locus award for best fantasy novel, and the Mythopoeic Society nominated it for their 2009 Best Fantasy Novel award.

In addition to her awards for her novels Lavinia, The Dispossessed, and The Left Hand of Darkness, Le Guin has won countless awards for her works, including multiple Hugo and Nebula awards for her short stories, multiple Tiptree awards, and the 1991 Pushcart Prize for her story “Bill Weisler.” In 2003, the Science Fiction and Fantasy Writers of America awarded her the title Grand Master for lifetime achievement, and in 2004 she was the recipient of the Margaret A. Edwards Award honoring her lifetime contribution to young adult readers.

She still lives and writes in Oregon with her husband Charles, and they have three adult children and four grandchildren.

For more about Le Guin’s life and work, check out her website: http://www.ursulakleguin.com.