On Blasphemy and Imagination
Arab Surrealism Against Islam

On Blasphemy and Imagination 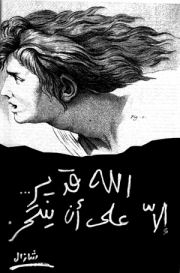 “God can do anything except suicide”
--Malcolm de Chazal

They integrated surrealism with ideas culled from Situationists, radical feminists, the rebel student and autonomist worker movements of the late 1960s, and the revolutionary struggles in what was then called “the Third World” (including the ghettoes and reservations in the US).

Most of their publications (most notably ar-Raghba al-ibahiyya [Libertarian Desire]) were outlawed in every Arab-speaking nation in the Middle East and North Africa for their seditious, blasphemous, and outrageously scabrous content.

Drawing from the work of important radical liberation theorists of the time such as Theodor Adorno, Erich Fromm, and Germaine Greer, the Arab Surrealist Movement in Exile formulated a sharp analysis of the ways in which political oppression, sexual repression, and Islam mutually reinforced one another in so many regimes in the Arab world (and, after 1979, in Iran).

It is difficult to find images or texts by the surrealists that attack the tyrannies of Islam without also encountering references to other authoritarian efforts to control, re-direct, or distort desire and sexual expression; frequently, the surrealists argued that State terrorism in the Middle East was at least partially rooted in traditional patriarchal Muslim violence against women and gay men, much in the same way that fascism has been understood by writers like Wilhelm Reich, Gilles Deleuze & Felix Guattari, Klaus Theweleit, and George Mosse.

This excerpt from the Exile Movement’s founding manifesto sums up many of their concerns: “Our surrealism destroys the so-called ‘Arab fatherland.’ We call upon individuals and the masses to unleash their instincts against all forms of repression, including the repressive ‘reason’ of the bourgeois order. We explode the mosques and the streets with the scandal of sex returning to its body, bursting into flames at each encounter. We poison the intellectual atmosphere with the elixir of the imagination, so that the poet’s self will be realized in realizing the historical transformation of poetry. We liberate language from the prisons and stock markets of capitalist confusion.”

What follows is a combination of the definitions of “blasphemy” and “imagination” from a glossary of sorts that was supposed to be a regular column in ar-Raghba al-ibahiyya.

It was published in 1974; this is the first time it has been reprinted or translated. Readers interested in more information can check out the relevant chapters in Sibylla Krainick’s Arabischer Surrealismus im Exil Der irakische Dichter und Publizist Abd al Quadir al-Ganabi (Reichert, 2001).

On Blasphemy and Imagination

If you toss the detestable banalities of religion into the lap of humiliation, then leave them where you threw them and ignore them for good. But don’t let that prevent you from practicing blasphemy. Some critics ask what would be the value of insulting Allah after we have established with certainty that He does not exist, but blasphemy does not validate religion or make it more truthful. Pronouncing blasphemy’s rough and outrageous words is significant and necessary if for no other reason that they become a delightful pleasure to utter. Moreover, blasphemy lends a hand to the imagination.

Imagination is a force whose existence is dismissed by journalists, economists, and anyone else generally concerned with obstructing the restless vitality of free thinking and sexual feelings. The reason for this is because the visions that are awakened by this force are so beyond our control that it has the potential ability to control us.

Imagination reveals to us the scope of human potential and nourishes desire by giving us the hope needed to fulfill these potentials. All dimensions of human happiness lie in the imagination. No one can be fully satisfied until all fantasies of this imagination have been achieved.