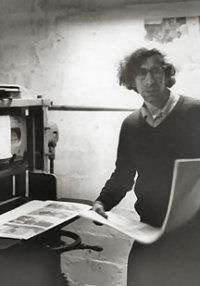 As we go to press in late June, we are receiving reports of discussion groups formed around the country, in person and in on-line blogs, that are reading Fredy Perlman’s 1976 historical novel, Letters of Insurgents, published by Detroit’s Black & Red.

One reader, DeAnna Tibbs, described the book as consisting of “fictional letters between two Eastern European workers, Yarostan Vochek and Sophia Nachalo, separated by twenty-five years and two continents. As they reconnect through an exchange of letters, we learn about the battles they have fought--physical, political, emotional, and moral--and eventually the ones they have left to fight.”

Another says, “It makes me cry and laugh like no other book. It is filled with fictional versions of real historical upheavals in the middle third of the 20th century, depicting them in vivid and personal ways that grow out of the characters’ lives.”

What Wilhelm Reich called the emotional plague--the constellation of sexual repression and misery, patriotism, conformity, and authoritarian character armor--is thoroughly studied, in its Bolshevik as well as Western forms.

Also considered is how the emotional plague can lose its grip on us, how rebellion and liberation can become contagious and spread in a wildfire of subversion; but also how the dynamics of this plague reconstituting itself is crucial in the death of liberated situations.

Fredy Perlman was a participant in the May ’68 uprising in France. He was involved with an early radical student newspaper in the height of McCarthy-era Los Angeles in the late 1950s. He was associated with the Living Theater in New York City in the early 1960s, and lived and studied in Belgrade, Yugoslavia from 1963–66.

He and his wife Lorraine formed the Black and Red publishing cooperative in 1968 in Kalamazoo, Michigan, but soon moved to Detroit. B&R prided itself, rightly so, on not having a division of labor which entailed Fredy, Lorraine, and other cooperators learning every step of the printing process from typesetting to printing pr and binding. The first editions of Letters, a huge undertaking for even commercial publishers and printers, were done in their entirety by volunteers at B&R’s Michigan Ave. print shop.

Perlman was an erudite student of radical history (as well as psychological and political theory) and had personal contacts with people who made that history, including anarchists in the Spanish revolution and civil war, and people involved with social struggles within the Soviet Union and Yugoslavia.

PERLMAN WAS THE FIRST to translate Guy Debord’s classic of the Situationist movement, Society of the Spectacle, into English. Perlman recasts much of Debord’s abstractions brilliantly and in a down-to-earth way in Letters.

For those interested in Soma, the Reichian-anarchist “therapy” created by Roberto Freire in Brazil, you might like to know that Freire was first exposed to Wilhelm Reich through Julian Beck of the Living Theater in Paris 1968. It is clear from Letters that Perlman, who was associated with Beck almost 10 years before that, also fully absorbed Reich.

Adding further to its richness, Letters includes a reading of Lewis Mumford through a Situationist lens. This kicked off the “anti-tech” tendency in anarchist theory, although the treatment of these topics in Letters is more nuanced and superior.

All of this informs Letters. When he wrote its 830 pages in the early 1970s, Perlman felt the arena for meaningful radical activity was shrinking, and saw himself as a “rememberer” of rebellion.

As Lorraine Perlman wrote in a biography of him, “In Letters of Insurgents, his contribution to a history of the period in which he lived, he recorded various forms of rebellion; he was acquainted with many of them first hand.

He also recorded the dead ends, the co-optation and the thwarting of rebellious projects. [The book was) a synthesis of most of Fredy’s 42 years; it follows fairly closely Fredy’s physical and intellectual journeys, reporting the upheavals which affected him, his family and his comrades...”

LATELY EFFORTS HAVE BEEN made to bring Letters out of its undeserved obscurity, so there are now fully searchable and nicely formatted versions of it online here: http://theanarchistlibrary.org/library/sophia-nachalo-and-yarostan-vochek-letters-of-insurgents

An audio version is available at www.audioanarchy.org/letters.html

However, the best source is through Black and Red, where the huge volume sells for $10 plus $4 for shipping. Their web site is www.blackandred.org

and has all of Perlman’s titles plus the work of other authors including Society of the Spectacle. Postal mail address is POB 02374, Detroit, MI 48202.

Although the reading groups have already commenced on-line through insurgentsummer.org, it is possible to catch up with the reading, or to use it as a model to begin new readings.

Also, there is an open face-to-face group at the Long Haul Infoshop in Berkeley, on Tuesday nights 8–10 PM at 3124 Shattuck Ave. in Berkeley, California.