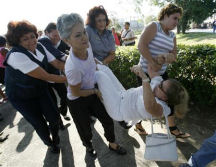 In March, Cuban police broke up a protest by the Ladies in White, women with family members sentenced to prison for opposing the government. The images of the women being dragged to a bus, their white clothes smeared with mud, were broadcast world-wide as proof of the repressive nature of the Castro government.

The women’s action was instigated by the death of a well known imprisoned dissident, Orlando Zapata Tamayo, who had been on a hunger strike since December.

News reports stated that as many as 30 women marched through Havana’s Parraga neighborhood with 200 government supporters following them, shouting, “Worms, get out of here. Viva, Fidel! Viva, Raul.”

According to news reports, as the pro-government crowd became more menacing, state security agents repeatedly offered to take the Ladies in White away, but when they refused, the women were shoved and pulled into a bus and driven to the leader of the group’s house.

In Miami, a week later, newspapers reported, “Tens of thousands of Cuban exiles wearing white, and carrying gladioluses and flags marched for blocks along Calle Ocho with singer Gloria Estefan in support of Cuba’s Damas de Blanco, Ladies in White...”

The Cuban Commission for Human Rights estimates there are currently 180 political prisoners on the island. The government brands all dissidents as disloyal and agents of the U.S.

Given the nature of attacks on demonstrators by police around the world, it is surprising that the Cuban response was as mild as it was. Often public protests there can land participants in prison. The Ladies in White marched again in Havana at the same time as the Cubans in Miami, and are now permitted to march.

Media response to this incident ignores the fact that all governments are repressive; some less than others; some more, but all worthy of condemnation.

A slogan often seen posted on walls throughout Cuba is true for all governments: “With the Revolution: Everything; Against the Revolution: Nothing.” Just substitute “Government” for “Revolution” and you have the motto of all nation states.

How brittle a particular government’s rule is determines how it reacts to those who act “against” their power prerogatives. Countries with formal democratic rule usually permit a great deal of political latitude (for instance, publishing this magazine). That is, until the rulers feel threatened by what they have allowed. And, even when their rule is not directly at risk, power often reacts reflexively to quash dissent.

The U.S. regularly criticizes Cuba for its repressive measures and prison conditions which bolsters the mythology believed by so many citizens here about this nation as America the Good. But, this is a state of wilful ignorance.

Police in the U.S. routinely attack peaceful demonstrators, often carrying out mass arrests as evidenced by the level of force used against protests at recent political party conventions. Going back a generation, National Guard and police shot student demonstrators to death on several occasions, plus killed dozens of Black Panther Party members. Further back in U.S. history, cops, and soldiers murdered hundreds of union members and labor organizers between 1870 and 1950.

During World War I, civil liberties took such a hit in the U.S. that the Wilson administration made that of George W. Bush seem eligible for ACLU membership by comparison. During World War II, it was concentration camps for Japanese, but not for German-Americans.

Cuban prison conditions are rightly criticized for their harshness and squalor, these definitions equally describe those of the U.S. as well. Plus, the increasing use in the U.S. of private contractor prisons and horrid conditions in immigration detention centers, make a mockery of American claims to criticize Cuba. Add to this, U.S. secret torture sites, Abu Ghraib, and Bagram in Afghanistan, and one sees a discernible pattern, but one usually ignored beneath a wall of national self-righteousness.

By combing the back pages of the few newspapers that still report international news, one can note the frequency of police attacks on peaceful protests in other countries, often with deadly results. When massive violation of civil liberties, routine torture, and brutal attacks on demonstrators occur in countries such as Israel and Egypt, staunch U.S. allies and recipients of billions in taxpayer dollars, the incidents rarely rise to the level of concern or criticism by either politicians or the media. Israel’s cruel wars or its May 31 massacre at sea are exceptions.

But to be clear in the case of Cuba, all of its political prisoners should be released immediately and all Cubans should have the right of free expression. Obviously, some of the dissidents have right wing politics such as the ones who assembled at a 2005 protest in Havana, shouting, “Viva Bush.” But among the 75 dissidents arrested in 2003, several of those related to Ladies in White were independent labor leaders who received outrageous prison terms.

It is important to oppose the repression carried out by the Cuban government, but it is equally important to not allow criticism of Cuba to act as a diversion from opposing what this country does here and abroad.

The Miami Cubans, for instance, would seem more credible if they were also critical of the abuses they condemn in the country in which they reside.

Only those who criticize all state violence deserve to be taken seriously.