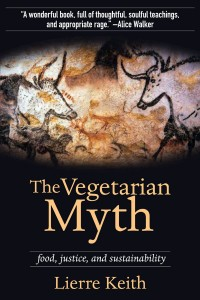 Once, at a Tai Chi workshop I attended, an elderly Chinese master of the discipline suddenly stopped in the middle of the demonstration and asked, completely out of the blue, “Why do so many of you not eat meat?”

Since there were quite a few vegetarians among the eager students, the only response was an embarrassing silence and the soft shuffling of cotton-soled Tai Chi shoes.

“There’s good ch’i in meat,” he admonished us in his accented English, referring to the energy flow present in all living things that would enhance us by ingesting that of another being.

Someone, anticipating that the answer wasn’t going to be well received, said weakly, “We don’t want to kill to eat.” “Why not?,” asked the master. “Everything eats everything. One day worms eat us,” he said and roared with laughter at his own comment. Weak smiles came from the assembled students who were thankful that the discussion went quickly back to the training at hand.

This is essentially Lierre Keith’s argument in The Vegetarian Myth--everything eats everything. She views existence as a tightly interconnected circle of life and death encompassing all living beings and the earth itself, and attempts to avoid or circumvent the process only brings the environmental, political, and health disasters she chronicles in her highly charged style.

The myth, referred to in the book’s title, is one held by so many of us, that a non-meat diet can save the animals and the planet, and that a vegetable-based diet is essential for good health. Keith, a vegan for 20 years, denies each of these contentions with a fervor consistent with the manner of all apostates. Her book marshals an enormous amount of supportive evidence from social and medical sciences, and adds her own meatless history which she says almost destroyed her body.

Keith, now a vigorous flesh-eater, advocates a return to meat-eating as a way to heal ourselves and the planet, although she’s sketchy on the details of what this would mean. She certainly doesn’t advocate eating at MacDonald’s.

You might think that an author who identifies herself as a radical feminist activist and who exhibits a driving concern for the damage being done to the environment would get a respectful hearing since her charges are so provocative and challenging not only to vegans and vegetarians, but to mainstream nutrition theories as well.

Instead, she and her book have touched off a firestorm of condemnation, denunciation, calumny, insults, and charges of bad faith against her. Her critics exhibit a fury in many on-line discussions of the book, calling her every name imaginable: a liar, a shill for the meat industry, an “animal holocaust denier,” and a publicity hound, all of which culminated in a physical attack on her while she spoke at the March 2010 San Francisco Anarchist Book Fair.

Three men in masks and black hoodies ran up to her as she spoke and slammed a cayenne-laced pie into Keith’s face, yelling, “Go Vegan.” Several days later, she reported, “My eyes are still puffy and blurry, but the pain is definitely better. I think the worst part was hearing people cheer my assailants while I was being assaulted. I don’t want to live in a world where people cheer while someone has cayenne rubbed into their eyes.”

That act, the equivalent of macing someone, at an anarchist event should be condemned as cowardly and completely unacceptable, but instead has been defended by some. Like antiabortion terrorists, self-righteousness excuses violence. Most vegans, I’m sure find this act as reprehensible as any meat eater would.

By the way, there are numerous books in print that make the same nutritional assertions and criticism of vegans as hers, but perhaps the fact that it was an anarchist event spurred the assault.

The North American Animal Liberation Press Office released a statement praising the assailants who “made their statement very eloquently and succinctly on behalf of the billions of animals she advocates killing.” Keith makes it clear that she opposes all factory farming and advocates restoration of forest and prairies in her book.

However, she must be aware, as our imprisoned vegan friend and comrade, Marie Mason--a harsh critic of Keith--that cattle grazing has destroyed many of the prairies the author wants to re-establish.

I haven’t eaten land animals in decades and most of my diet consists of grains, legumes, and vegetables, with some additional seafood and dairy products. My health is excellent. So is that of my veggie and vegan friends as well as that of the many famous people such as k.d. Lang, Moby, Morrissey, Rep. Dennis Kucinich, the late Coretta Scott King and Cesar Chavez, numerous professional sports stars including triathletes, body builders, and professional basketball players and baseball players, who adhere to a vegan diet. Yet, Keith says her vegan diet badly injured her body including causing a spinal deformation from which she’ll never recover. She cites anecdotal evidence and studies demonstrating how the body cannot be sustained without ingesting animal fats and protein.

Many critics of her book (and, there are many!) take on her advocacy of meat consumption although much of the on-line rage stems from charges that her book incites “the murder of innocent non-human beings.” To support her nutritional claims, Keith cites endless and seemingly legitimate medical studies affirming her carnivore point of view, many which confound current dietary recommendations including those published by the U.S. government, all which advise limiting meat consumption.

Contrary to what highly respected, independent groups like the Center for Science in the Public Interest advocate, Keith says that a heavy grain-based diet is the cause of what she identifies as the “diseases of civilization”--cancer, heart ailments, and other plagues of our era. Causal factors for disease and the impact of diet on health aren’t as easy to discern as one would think. Am I healthy because of my diet and active lifestyle, or, because I’m a North American, white, middle-class man? How we live and what we eat greatly effect our health, but so does where we are situated in the class pyramid which often has determinative consequences.

Keith says she greatly respects the desire of non-meat eaters to live without killing, but asks them to look at the damage done by agriculture which she refers to (irrefutably, I’d say) as “bio-cide.” The planet-wide swath of agricultural land with its mono-crop planting is really what has killed “billion of animals” that the pie-throwers say they care about.

Keith asks us to look at a piece of land with its thousands of inhabitants, not just its mega-fauna, and see the destruction and death necessary to raise corn for tortillas, wheat for pasta, or rice for biryani. Farming, especially the modern variety with its dependence on fossil fuel eliminates all vegetable and animal life other than the desired crop. When you eat vegetables, it too is on a mountain of corpses, big and small, when one counts the species that have been driven from the land for cultivation including the tiniest of living beings that are eradicated.

So, to eat grains, no less than meat, is to kill. Meat is murder? So is wheat. But, if you substitute the natural process of death for the loaded word, murder, a much different set of ethical standards arise. Keith, like this publication whose critique of agriculture began many years ago, realizes that systems of production have social consequences as well as environmental ones. The historical record is there. The accumulation of the surplus large scale agriculture could produce was the first capital although shortsighted Marxists claim the system of capitalism itself didn’t arise until thousands of years later.

With wealth that could be hoarded, a system of rulers established itself (the State), protected by armed men, created a division of labor, destroyed the matriarchy and implanted angry sky gods who ruled as men did on earth, grouped people into the squalor of cities, and began a relentless drive to conquer with its planetary system.

Annual grain production also allowed a population expansion as more people could be fed, and as the number of people grew, so did the need for more land to be brought under cultivation, which produced more grain, which allowed for more people to be fed, which...

What emerges ultimately from her text is catastrophism, the long neglected Deep Ecology concept of Overshoot; the view that we’ve gone so far beyond the planet’s resources, used up so much of what it could provide to a species in balance with nature, that we are headed for a planetary collapse. Keith, as well as this publication, Deep Ecologists, and even many mainstream observers, state frighteningly that the march of agriculture has brought us to an untenable point as a species. We’ve overshot our carrying capacity with the destruction of forests, watersheds, seas, and the rapid disappearance of top soil and now exist by drawing down on what’s left.

This seems a much more potent question for the pie-throwers to confront rather than whether a human can exist on vegetables alone. If we’re on a bullet train speeding along at 250 miles an hour with a washed-out trestle ahead, does it really matter what’s on our plate in the dining car?

Nutritionists can argue forever about the claims and counter-claims about diet. That discussion is crucial to our individual health, but what do Keith’s critics say to her central theses? Do those who want to live without killing deny that agriculture, which provides 80 percent of the world’s diet, is murderous (in their terms) little different than the death created by meat eating? Keith states, the “foods the vegetarians say will save us are foods that destroy the world.” Doesn’t this necessitate conversation and debate rather than denunciation and violence?

Do Keith’s critics deny that agriculture allowed the first rulers to arise and with them the State, patriarchy, and repressive religions? Or, that with the advent of agriculture, human and animal life became disvalued, and abstraction replaced real experience?

But, even if we agree with her, where does that leave the vegan, vegetarians, and others like myself who eat a reduced animal diet? Maddeningly, Keith gives barely a hint. She certainly doesn’t provide recipes; doesn’t even suggest what proportion of meat properly belongs in a diet (although she offers the Innuits whose 80 percent meat and fat diet doesn’t result in heart disease or cancer).

She says diet ought to be appropriate to where you live. Keith says the damage the planetary population will experience is unavoidable given the number of people on earth. She says the question is, are people going to attempt to manage what is unavoidable or will the blindly wielded scythe of Nature, neither cruel nor compassionate, do it for us?

Postscript: I almost forgot the other title under consideration, Vegan Freak. Its vapid, chatty text advocating a diet without animal products is seemingly aimed at making late teens gag at the thought of eating even dairy products (Did you know that all cheese “contains at least some pus?” Ew, gross!) The book almost made me go out and eat a burger.