A Morning at the Library 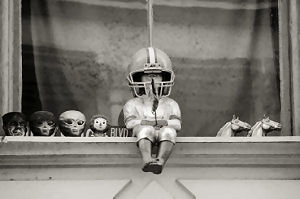 For the past five years I have been a reference librarian at a small public library in Florida. Today I pulled into the parking lot at my usual time of eight-thirty. The Library did not open until ten, but people often lined up early at the front doors. The library was the most impressive building in town. It was big, modern and well lit. It really stood out among the small rental houses and grungy bars that make up the rest of the area. The only person waiting when I arrived was Marco. Marco sat at his usual morning post on the green bench next to the main glass doors of the library. He got there every morning hours before the library opened. Marco was in his fifties. He described himself as a special forces killing machine created by the United States government. He did not look like much of a killing machine. He was an overweight guy with a dazed facial expression. His dazed expression may have been caused by the prescription medications he got from the veteran’s administration or perhaps that was just his natural state. I did not know. He always wore black and had a collection of crosses hanging around his neck. These were the kinds of crosses they sell at the flea market for bikers and metal heads. Because of these decorations Marco was known to the young teens who hang out at the library as Ozzy. My car was the only car in the parking lot except for a big black Escalade. I knew it was not Marco’s. Marco rode the bus.

“Good morning,” I said to him.

“You should go look in that SUV.”

“I looked in there twenty minutes ago and I saw that blonde in there give head to four different guys.”

“I am telling you the truth. I don’t fuck around with shit like that.”

“I will take your word for it.”

“You should go take a look. You will get a real eye full.” “Think so?”

“You just ask Alberto. He saw more than I did.” Alberto was the library’s Columbian janitor. “Well, I gotta get to work, Marco.”

I left Marco staring at the black SUV and walked down to the big metal doors that made up the staff entrance. I went inside and flipped on all the light switches, bringing the dormant library back to life. Once inside the library I found the books on the shelves gave me a feeling of protection. They stood between me and Marco’s world of damp morning parking lots with a smell of salt and shit and mysterious parked vehicles. I wondered if Marco really peeped into that vehicle. I wonder if he really saw something. Perhaps he only thought he did. He was an odd guy.

I checked my email. The only thing interesting in there was a message from Jim Hamlet, an old friend of mine who lived in Brooklyn. His email went like this:

“As Sergeant of Arms you may have the authority over this guillotine but I reserve the right to grant or refuse any request for immediate extermination by force or otherwise.”

I was not sure what that meant. He could be getting a bit crazed or this could just have been a fragment of some literary project he was working on.

I exited out of my web browser and stared ahead. In front of me was a multi-colored poster that read, “Let there be peace on earth and let it begin with me.”

I suddenly felt very tired. It was a typical day.

A few minutes after the two elderly eastern European women, Lona and Edna, arrived to work, I opened up the front doors of the library. At the circulation desk, Lona was pulling an ancient comb through her nest-like hair, and Edna was eating a large pastry that dripped red filling on her chin.

The first person to walk up to the reference desk where I work was George Wells. George is sixty-six years old. George was one of many old guys who came to visit me at my desk. These guys were often hard to understand literally because of their strange idiomatic way of talking. When I did understand George often his attitude toward what he was talking about left me perplexed. Racism, homophobia and sexual crimes were discussed with the same carefree enthusiasm as the weather or high school girls’ softball team scores.

“That son of mine,” George begins. “He is always drinking and getting in fights with those Mexicans. I don’t know. I don’t know. I wish he was like me and would just stay in the house and watch TV once it got dark.”

“That would keep him out of trouble,” I say.

“Nothing would stop my boy from starting trouble.” George stood there in front of my desk. He seemed to be looking out into the distance. Then he spoke:

“He better stop fighting,” I said.

George eyed me angrily. He liked to talk, but whenever I replied to something he said he gave me a hard look.

George was a big fan of the local high school softball team. He would often stand at my desk and go on forever about softball statistics and the various events in the lives of the girls on the team.

“I don’t want nothing to do with that softball. I do not care what they say. I was out there teaching those girls how to field those balls, and you know what those coaches said?” asked George.

“They said I was giving those girls suggestive looks and using inappropriately sexual mannerisms.”

I did not have anything to say about that. It was hard sometimes to gage the difference between confession and humor with George. So mostly I remained silent. George seemed to like it better that way.

“I can still go to the games, but I have to stay on the other side of the fence,” said George.

“I know how much you like those games,” I said.

“But that coach when he saw I was tearing up and taking it hard, you know what he did?”

George pulled a baseball cap out of his blue jeans pocket and put it on his head. The sight of the hat on his head was remarkable. George was a very short man, and his clothes were old, well-worn, and not particularly clean. The brand new brightly colored hat made him look suddenly like a new person. He was transformed from this small, sad, poor man into a comic sort of cocky cartoon character.

George started walking around the reference desk pointing to his head.

Bill, an old merchant seaman, looked up from where he was reading the Investors’ Business Daily at a table next to the reference stacks.

“Nobody,” explained George. “They gave it to me because they thought that I was going to molest some teenage girls.”

“Oh,” said Bill. He went back to his paper. That was a typical response. All the regular patrons were used to George’s usual statements.

George wandered off to the back of the Library.

I am writing this story as an experiment. The experiment is very simple. After everything I have been through will I be able to write a story? I honestly don’t know if I can make it to the end.

One word at a time.

I once thought a lot of myself. That has been ground down over the course of the years, but not as much as you might think. I have been through a lot. Haven’t we all? Psychiatric wards. Pharmaceutical Hazes. Colleges and graduate schools. Jobs. Friends. Disappointments. I have been convinced of the existence of God. I have believed in metempsychosis or reincarnation. And I have lost my belief in these things. I have communicated with things no one else could hear or see. I have had problems with doppelgangers and demons. I have proclaimed understanding of complicated kabalistic mysteries that now I cannot even pretend to understand. I thought I reached Buddhahood. And that did not last either. I have had experiences that I would have to describe as sexual relations with the dead. Not necrophilia exactly. On a higher plain: spiritual or astral.

Have you mastered your delusions?

I believe in the serious joke.

I glace up and see George looking very sad and defeated standing in front of my desk.