This collection is the first ever in English or French of new anarchist fiction. These sixteen stories, offer something for everyone: If you like action, there is plenty of action, as well as surprise endings and thought provoking parables. This is a great idea for a collection of stories and it is wonderful that it exists as an accomplished fact. Pulled together with lots of hard work and inspiration--expressing self-organization, self actualization and cooperation at its best--the publication of this book is a do-it-yourself revolutionary action that means to make a difference in this world. 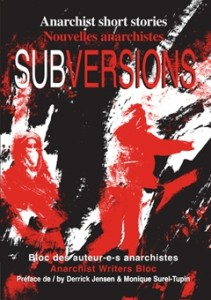 A dramatic cover design by David Lester in red and black, and a good internal design make this an appealing book at first sight. The book includes two prefaces, one in English, and the other in French. Derrick Jensen, in the English Preface calls for a literature that begins “working to restore and maintain a literature of justice, resistance, and revolution” (10). He talks about the obsession with self in current fiction. As a surrealist I, too, see this obsession. We surrealists have often labeled this obsession: Miserablism. Briefly, Miserablism is the idea that this is the way it is, it’s unchangeable, other people are there for you to use, so be sure you get your piece of the pie. This book exists as a challenge to the society of oppression. (Citation? Is this a quote? Where from?

The French preface is written by Monique Surel-Tupin, playwright, actress and co-author of a three volume work about anarchist theatre in France between 1880 and 1914 (Au temps de l’anarchie, un theatre de combat, 1880–1914).

The writers represented in the collection include Alan Franklin, Bruno Masse, Cara Hoffaman, Norman Nawrocki, Ron Sakolsky, Sean Wood, and others--some well-known, some new. The group originally met in May 2010 at the Montreal Anarchist Bookfair, one of the great contemporary gathering places where people with original ideas get together to talk, exchange info and be mutually inspired.

The goal of this particular group, the anarchist writers block (AWB), is “to promote anarchist theory and action through works of literature, poetry, theatre, screenwriting, etc.” And they claim their inspiration “from writing workshops, regular rowdy and drunken nights of anarchist cabaret where music, theatre, comedy, song, and poetry rule.”

For example, Montreal also hosts the world’s only Anarchist Theatre Festival which takes place a few days before the Bookfair. Members of the Writers Bloc performed a play they had written about an elderly woman they knew being slammed to the ground by a cop during a support demo for those arrested during the G-20 in Toronto.

The Anarchist Writers Block sifted through submissions looking for stories “that in some way qualified as anarchist fiction and were not simply discursive, socially realist, or social protest, and not just fiction from anarchist writers--some kind of anarchist content or perspective.” After much discussion (consensus takes a while) they concluded that “Anarchism for us, in very broad terms, means a collective or movement for individual liberation, against power and all forms of oppression and exploitation...anarchism offers an alternative vision of a new society based on voluntary cooperation and free association with a non-hierarchical social structure with out bosses, cops, priests, or the domination of one person by another, without the power of the state, organized religion, or capitalism... we desire to abolish all forms of alienation, power and domination. We fight for a free, green and egalitarian society through direct action and direct democracy.” Surely you are going to want to get this book to see how they did on carrying out this ambitious hope!

Having long been fascinated with history and writing, I feel that it is through writing, through books in particular, that we work out our destinies and the future. The published book, the play, the poem, make a statement, take a stand, that casual speech or Internet exchange lack. The printed word exists as a commitment, a direction, a building block....sometimes a provocation. History does not exist until it is written; and we cannot even get a hold on our own thinking until we have translated it into words on the page. The future, too, will be sketched out on paper, and critiqued, and expanded and developed, in conversation, yes....but it will reach out to others through stories, and plays and poetry....and even history, for history is a matter of choice, what will we choose to remember?

The hostility some of the writers felt is expressed in writing about fighting and destruction often directed against the over complexity and oppressiveness of today’s society. This writing was as lively and viseral as any action movie, but perhaps with the same limitations. We feel the relief that visualizing action brings but it is still only a temporary relief.

There was beauty and a dark magic in Cara Hoffman’s short “Sea Monkey Theatre.”

“God knows how long sea monkeys live, But they lead fabulous lives we can’t even begin to understand...they can be resurrected” (80).

In Ron Sakolsky and Sean Wood’s jointly written story, the character in “On the Run” questions himself, “His life was out of control. Overnight he had gone from being just another angry punk masking up and rioting in the streets to being a wanted outlaw without having really thought it through. ‘Shit, what have I done,’ he asked himself over and over again.”

The stories written in French are as diverse and well-written as those in English.

Well, let’s thank these people for their work and commitment. The world is a better place for it.