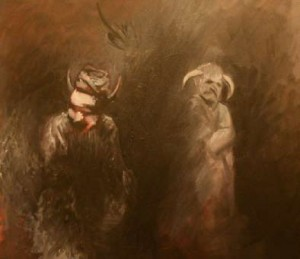 My father had strong ideas about heaven. He would share them with his congregation like sweets for good behaviour. ‘There will be no gravity,’ he would say with irresistible certainty. ‘And no sun or moon. God’s love is all the light we need.’

At home on grim, rainy Saturdays he would stand looking out of the window for long durations while I lounged around reading comics. ‘We won’t have to endure this for much longer,’ he would say, looking up to the continents of clouds overhead. His eyes would close and a serene smile form in his mouth; and I, just a boy, would look up in wonder knowing that in those moments he was not thinking of this life, of me, but of paradise.

‘Listen to me,’ he once said, putting my book aside and glaring down with his stern, intense eyes. ‘There are a lot of people in this world that’ll lead you astray. They’ll lead you with their ideas. They’ll have clever arguments for them that get in your head and confuse you. But listen to me son, there’s only one path to heaven and it’s here in this book.’ He thrust a Bible into my hand and squeezed my fingers around it. ‘God’s laws don’t change. But ideas and arguments they come and go like fashion.’ I nodded obediently. ‘Let Him do the thinking, okay?’

And I did, for forty years. My life unfolded almost effortlessly in a series of sensible, modest steps. I became an R.E. teacher at the comprehensive, I married, bought a house, had a daughter. I took them to church (though Elly was agnostic), put money aside for Charlie’s future, and at night slept soundly secure in the knowledge that we were all on the right track.

Elly’s death was the greatest tragedy of my life. Cancer at fifty.

Over the next few years I pulled Charlie very tightly to me. I told myself that’s what she needed too, for her own survival. It never occurred to me that she was the stronger one. On those hard, wooden pews I would repeat my father’s phrase in my head, kneading it like dough: ‘We won’t have to endure this for much longer. Not for much longer.’

When she returned after her first year of university she told me she was gay. We sat opposite each other in the lounge neither of us knowing what to say. Then she said: ‘I’m sorry’ and for some reason that set me off. We stayed there for half an hour crying and hugging, even laughing. Later I remembered that three years earlier she asked me what the Bible had to say about homosexuality. I quoted it verbatim: Corinthians 6, verse 9. My father had drummed it into me: the unrighteous shall not inherit the earth, neither fornicators, nor adulterers, nor homosexuals. It hadn’t occurred to me why she was asking. I had become numb and fossilised by grief.

Things changed after that. I suppose for the first time in my life I started to think, though it took me another two years to renounce the church. It was not easy to let go of ideas I had invested so much into. They framed my world, my expectations; gave meaning and direction. I tried to save them, I flirted with interpretations that embraced new definitions and played down the authority of Paul--Paul the misogynist, Paul the homophobe. But I couldn’t escape the sense of dishonesty and shame that came with it. I owed her something more, something courageous.

I drove up to Nottingham to surprise. She lived half-way between town and the university in a run down, three storey Victorian semi, which had once been flats, compartmentalised into a dozen box rooms and tiny kitchens, cluttered, damp, smoky. In the kitchen recycling spilled out of boxes, the walls were plastered with pictures and posters, a noticeboard made from corks hung down from a six inch nail and a large pink and black flag stared down at me.

‘It’s the symbol of queer-anarchism,’ she said.

Her friends were warm and energetic. We sat round the table drinking tea for over an hour. They educated me about Shell and its dubious operations in County Mayo Ireland. Work on the pipeline had re-commenced and there had been an urgent call-out for action. ‘What sort of action?’ I asked naively.

They talked about breaking the law so casually it made me uncomfortable. They had no respect for the police, nor for Shell’s need to provide power to the British population. I challenged them in a cautious, conservative way and as I spoke was aware of a voice inside me; stern and unpleasant. Was this really me, my voice? I waited for their retaliation with a quickened pulse, but none came. They took it in turns calmly, rationally, pealing away the skin of my objections until I had nothing left to say. I wasn’t used to being the recipient. In class I was the authority, the moral voice.

‘Your friends seem quite intelligent,’ I said to Charlie when we were alone. She nodded, as if it were an obvious and trivial thing to say; she was more interested in why I had come. She tilted her head coquettishly and pondered me with broody, deductive eyes. I sat down and then came out to her as she had to me. ‘I won’t be going to church any more,’ I said.

‘Really?’ I had shocked her. Her eyes filled with admiration. She looked at me as something new and alive and before I had got through my reasons she bounded over and embraced me.

We walked down the hill into a district with tall concrete tower blocks, uniform green fencing, that was unimaginative and hostile, and a grim pedestrian underpass. A group of young guys with dogs approached. They were Staffies, though one of them was huge and pit-bullish. Their owners had the look of water skiers--leaning back on the leashes as their dogs fought to break free. To me they seemed inherently malevolent; like dark clouds lurking on the horizon. They had destroyed my jubilation, I groaned inside with cowardice and the reoccurring theme of the world’s imperfection.

But then Charlie’s voice fell on me like a sudden, refreshing rain. ‘The cafe wouldn’t survive without its army of helpers,’ she said in a light, airy tone, completely oblivious to the danger. ‘And none of them get paid.’ I shielded myself behind her words and aura until the men had passed.

The cafe was sweet and cosy, its benevolent, clumsy workers buzzed around like ants; and over tea Charlie explained vegetarianism to me, as well as her desire to become vegan. Her flesh and form and voice and smile were so, so familiar to me; my creation, my blood. But her mind was so different, so unique and admirable.

Afterwards we walked into town to an old pub built into the sandstone caves, full of young people dancing to gypsy jazz. After two pints of Black Pig I sat in the corner, tipsy and mute, watching her dance with another girl who was tall and wiry, elfish looking with red hair. Was this her girlfriend? I pondered it over for a while, worried I would not know how to embrace this lesbian thing, this queer anarchism which sounded frighteningly new, until I could no longer ignore the discussion going on around me. They were other students, Charlie’s friends no doubt, talking and moving freely, drinking from each other’s glasses, putting arms around each other, rolling cigarettes. But it was not all love and affection. The girl to my right was small and mousy with an unfortunate face of acne and was trying to defend the idea of cities against a shabby, crusty type. He had a crab’s face with two intense, beady blue eyes and tiny cheeks, that struggled to assert itself from behind his hedge of a beard. He was aggressively confident.

‘Cities don’t have to be like this,’ she said, stammering a little. ‘I think they do,’ he said decisively. ‘Cities are necessarily unsustainable and hierarchic.’ There were murmurs and nods of agreement, the mousy girl sipped her pint awkwardly flashing her timid eyes over the glass.

‘So what’s your vision?’ someone asked.

At first he smiled with modesty and surprise, but in an instant his face assumed the selfless, dutiful look of a leader. He began like a conductor launching into a piece, his hands thrusting his energy forwards into the group. He talked about the evolution of human society; the unfortunate paths we had chosen that cultivated domination and unsustainability; the creation of states and capitalism which divides us, pits us against the other, pervades every facet of our lives. I couldn’t tell whether he was mad or some sort of genius. Either way I didn’t really understand. Though at one point he spoke of the need to destroy before we could create and for a while he made sense. I thought of Charlie and what I had destroyed for her. And then in a panicked shudder I thought of Elly and the destruction in my own life. The horror and anxiety of her loss emerged. No, I said-imperceptibly to the others but I felt the breath pass my lips. We must preserve. Preserve and heal. But Vinny continued, drumming himself up into a rapturous state. After the old pillars were destroyed people could start again and he knew how.

His style was familiar to me: passionate, certain but somehow rehearsed. He had all the answers and vainly preempted any objections that could be thrown at him. A couple of times I glanced back over at the girl, her eyes wistfully dim, and wondered how much he really saw. He stopped at last and held a pert, triumphant posture ready for any response, but no one knew what to say. He annoyed me but what could I do? His arguments were complicated--a dense tangle of logic that would bind and strangle all who resisted. Charlie was also beckoning me to the dance floor. Her arm was hooked tenderly around the waist of the wiry, red-haired girl who now grinned solicitously at me. I started to get up. But then something about his smug, pious face, really got to me.

‘You know,’ I said, leaning forward abruptly. ‘The way you speak,’ I coughed a little finding my voice, ‘it reminds me of my father.’ I pushed on becoming more assertive. The group’s curiosity grew. ‘He had fixed ideas about the future and human nature and all that.’ The confidence in his expression wavered as he pondered my meaning. For a second his eyes flashed, as if expecting praise, but they settled in a defensive, weary look But when I said: ‘He was a priest you know,’ his face opened to me. His eyes shone with a vulnerable, wounded light-- I had touched a nerve. I could see he was afraid and lost like the rest of us.

When the time came, meeting Charlie’s girlfriend was not the awkward moment I had imagined. We both loved Charlie and she loved both of us. That was it, so simple. I remember thinking how silly all those ideas were I’d had on her behalf--the type of husband, what kind of career; plans formed from my own unplanned life. Here she stood before me, happy, her spirit loose and naked. This was the person she had to be. And as we chatted and discovered one another, I felt the pleasure of a knot being created, my frayed old life entwining with these girls. I had no sense of the future then, of what would be or ought to be, but a feeling of lightness and relief, and once more my heart stirred ready for life.