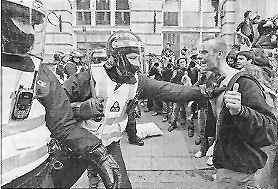 Militarized police attack unarmed demonstrators at a protest against the G20 meeting in Toronto, June 2010

In a packed Toronto courtroom, November 23, the prosecution dropped all conspiracy charges against the so-called “Main G20 Conspiracy Group,” 17 organizers from Southern Ontario and Quebec.

The G20 Summit, a meeting of international finance ministers held in Toronto in June 2010, was met with huge protests, followed by unprecedented mass arrests: 1105 people detained, and over 300 charged. Countless others were targets of police brutality and violations of fundamental human rights. Of those charged, almost 200 had charges dropped.

Almost 20,000 law enforcement personnel were deployed in Toronto to secure the summit from protests. Out of an unprecedented $930 million dollar budget for the event, 85 percent was spent on security, turning the city into a mini-police state.

One of the 17 defendants, Patrick Cadorette, an organizer for the Anti-capitalist Convergence of Montreal (CLAC), had his charges withdrawn after almost 18 months of restrictive bail conditions, including 11 months under house arrest.

This legal development resulted from a plea agreement between Crown and Defense counsel. Of the 17 charged with conspiracy, six pled guilty to “counseling” mischief, while the 11 others had their charges dropped.

“The public has heard a lot about police brutality and mass arrests at the G20 summit,” Cadorette says, “but the repression went a lot deeper than pictures of angry policemen beating on demonstrators.”

“We now know,” he continued, “that there was a complex strategy aimed at criminalizing political dissent and anti-capitalist organizing. This strategy included infiltration by undercover cops, the surveillance of various movements, the intimidation and harassment of activists, and hundreds of illegal searches and arbitrary detentions during the summit itself.”

Cadorette also stated that through imposing draconian bail conditions such as strict non-association with targeted community organizations, long term house arrest, and banning organizing or attending public demonstrations, legal authorities clearly meant to weaken movements working for social and environmental justice and to discourage people who identify with these movements from getting involved.

Add to all this the serious criminal charges targeting organizers, public defamation, and bail hearings held in a climate of mass hysteria following the protests, as well as the staggering amounts requested for cash bail, and there are all the elements of a perfect plan to demonize and criminalize political activism.”

The tremendous number of conspiracy charges laid against activists is also alarming. According to Blandine Juchs, of CLAC’s Legal Support Committee, “Using conspiracy charges is strategic. The Crown initially lays grossly exaggerated charges to make sure they have enough wiggle room to squeeze out some guilty pleas for lesser charges down the road. But the charge of “counseling” itself criminalizes the simple expression of political opinion at political events”.

Despite the public condemnations of the egregious police brutality and suppression of civil liberties, not surprisingly, all the police forces involved have gone unpunished and the politicians responsible for the security debacle still remain in the shadow.

“Its a real farce,”, concludes Cadorette, “a big joke that cost a lot of money! And, for what? Who can say today what the purpose of the Toronto G20 was?”

“For us,” he says, “one thing is clear, the G20 summits, the institution itself and its so-called leaders are completely illegitimate. At a time when revolts are sparking and multiplying everywhere against the tyranny of the market, austerity measures, economic inequalities, and wide-spread environmental destruction, the wealthy and their goons know full well that their days are numbered. They are shitting their pants. It’s why they’re spending hundreds of millions to put up fences and place thousands of armed cops between them and the rage of the people.” In the end, history will remember us as those who tried to stop the only real criminal conspiracy that happened in Toronto in June 2010: the bunch of fucking G20 crooks.”