Declaration by the Ghost of Emma Goldman 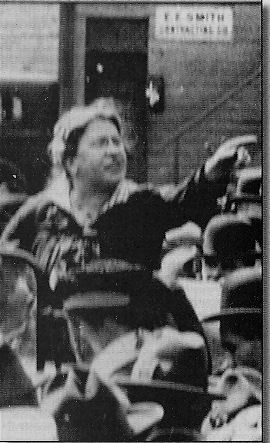 I had come to believe capitalism is just the tip of the iceberg of human stupidity. Altogether there is no injustice without complicity. And truly the sight of a brooding wage slave beguiled by some vapid ideologue of privilege is pitiful. So certainly I knew if you drift into complicity with the world in its ever rude war against you, you lose the world within, but by then I was dying and in need of quiet so was tempted to simply tell them all what they wanted to hear, by then it already seemed idiotic to have much conversation at all, we so readily scoff at any workable proposal for our common survival. And our fetishes abound, as if it were more comforting to obsess about some conspiracy than to face up to the elemental stupidity of our breed.

How easily we succumb to the daily routines of our traumatic bonds. Just think how we yield to the factory system, moving like bugs through the industrial maze. And always some echo of brutality haunts us. At some point we’ll either all crawl out of our trenches or die. And yet if I had come to hate what we are collectively, I was too often susceptible to who we are individually. Even now, amid these shadows, I’m baffled by the naive adventurism of the heart.

There is the grit and what crawls in it. Contrary to the expectation of the living, death is about fundamentals and when it comes to fundamentals, in death as in life, if you give illusion no quarter you’re on your own. Most days, like some wandering dybbuk, you can’t put your arms or mind around death--but really what does it matter, by now you’ve come so far no act of will is required. My spirituality has come to be a profound disinterest in what’s next, I’m dead but I’m not stupid, an artful death is next enough for me. I don’t miss the meetings, the storm of words, the lonely oratory and constant exertion of the struggle, I miss breath, breath is the great ancestor, the ebb and flow of the precious phantom body. Antonio Porchia: whatever breathes is incomplete.

Our wise comrades realize not every battle will be won--for the wise, winning every battle is not desirable, for victory and defeat are both moral currents in the underground river that is the source of your power and the self-trust you must have if you would spit in the eye of the world. If, on the level of resistance, sentimentality and brutality are sometimes yoked together, so be it. Expediency is an organic evil but it is also true there are natural facts that must be conceded, just as ultimately the just path resonates with the body and the kindly body is our intimate comrade, our cosmos.

And I was always suspicious of the artists and other bohemians who festooned our gathering places like baubles or lurked in our cafe corners like shadows. The great vision requires the steadfastness of the critique, people too often confuse anarchism and our program of free love with mere spontaneity. But I tolerated these misfits, even if I never believed art to be the unerring heartbeat of the struggle I knew we must have its influence in our midst. Any fool can see how we perceive our solidarity when we are happy and our isolation when we suffer and, no matter how untamed its milieu, art awakens us to the stark fact of recognition that is the beginning of all transformation and of knowing that in neither plague nor disenfranchisement are we alone. All along I acknowledged we need these experimenters to remind us of the vast realm of connection, for forgetting it is more natural to us than remembering as we undergo the pedestrian demands of our days.

I remember one of their ilk used to provoke me to distraction, he was so unlike either Sasha or Ben, yet I was thoroughly unsettled by how readily he made me blush or even mindlessly tuck away a wayward lock of hair. Karl--a strange one, that one, with sundry warts on both his face and arms, some dark, some pale--and warts equally decorated his personality. He would declaim a strange poem about a leaf bright in the evening light, that sort of thing. And somehow I couldn’t help but feel the most perfect thing about him was how he didn’t know he had to be perfect, one day I’d berate him for some errant bourgeois view he had espoused and though he’d appear properly chastised the next he would put forward another disastrous opinion based on nearly the same assumption. Maybe he was just too busy rhapsodizing to really take himself to task, who can say? Anyhow, it’s necessary to keep some perspective, certainly better these oddballs than those well scrubbed managers and agents like Frick, those family men and churchgoers basking in uprightness even as their true moral goal is daily put forth as simply more service to the great day of commerce ahead.

And I was aware that our artist cohorts never thought much of me either, they merely saw my uses like I saw theirs. But then I never really cared much what people thought, most of what people think isn’t serious anyway. And it isn’t thought that holds up the world. I don’t know what holds up the world, maybe love, or the hope that one day it will be love that holds up our world, while we inevitably busy ourselves with the press of things we mostly soon forget. And all the while a thousand injustices can slip by like so many whispers in the wind, even as our maestros of war and finance wave their batons over the land and we stand on the same pier we’ve stood on for a millennium waving a ritual goodbye to our soldiers.

I see now that the mind is occupied territory. Most likely, as long as we’re thinking the mind is under occupation. Despite our high ideals and surging rhetoric, we go on as if we were alone and adrift, seeking some small moment of advantage. Indeed, amid so much of the usual sectarian bickering you’d think we couldn’t see past our noses or had to close one eye to see out of the other. Will we ever pull aside the curtain on this hapless drama?

That I reckoned all along that exile was preordained didn’t relieve its bitterness when it came. And then we met Lenin and I knew right away from his methods and his manner that the inimical force is universal and subhuman, power defiling the dream of equality, not one of those Bolsheviki would know anarchism if it crawled up his arse.

Forcible exile was my transition to this protracted internal epoch, for a born agitator probably the only way to get away, I admit. And I’ll admit this present bardo of mirrors and shadows is not unfamiliar to me, it recalls the narrowing of the days leading to my removal like some sideshow Ishmael. I’ll even confess that by then many of my comrades were happy to see me go as they had come to view me as merely difficult and disagreeable, but you see I had sought the path I would know as essential and when I found it I stuck to it--what apart from that willfulness would pierce the fog of subjugation?

I’ve been dreaming. The dead dream faceless dreams, the mind returning to the mineral wellspring, hardly distinguishable from the earth, not burdened by creation. I was really just a girl when I first came to New York and the verbal urgency of its anarchist halls and cafes, I was alive within that contradiction, wanting to throw off all fetters and yet, truth be told, be plucked like a dewy flower. Look at me now, in love with the borderless quiet. But I should say, having always taken refuge in candor, that despite my hardening pessimism, I still hope for the hidden story in all that unbroken conversation.