Redrawing The Line
The Anarchist Writings of Paul Goodman 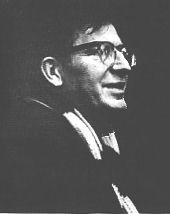 While relatively unknown today, Paul Goodman was one of the most influential thinkers of the 20th century. In books like Growing Up Absurd, published in 1960, Goodman captured the zeitgeist of his era, catapulting himself to the forefront of American intellectual life as one of the leading dissident thinkers inspiring the burgeoning New Left.

Goodman, who passed away in 1972 at the age of 60, was an iconoclastic radical with a wide ranging scope of intellectual vision and a multi-faceted character. He was an anarchist, a family man, openly bisexual in a sexually repressive era, a psychologist (one of the founders of Gestalt Therapy), and a poet. He saw himself as a classical man of letters, and at his peak output, released nearly a book a year.

PM Press has recently reprinted some of Goodman’s writings in three volumes. The first, Drawing The Line Once Again: Paul Goodman’s Anarchist Writings, collects short essays from throughout Goodman’s lifetime including “The May Pamphlet,” one of his earliest pieces. Many of these pieces were later incorporated into his longer works.

“The May Pamphlet” is in many ways Goodman’s manifesto, outlining some of his basic principles. From advocating a free society, to discussing the nature of language, to an examination of the education system and its function as a system of coercion, the themes and principles outlined in it are revisited time and again throughout his writings.

One of the key ideas examined in the “May Pamphlet,” is his concept of a free society. This is one constantly striving towards what Goodman calls the natural society or how we would live and interact with one another if outside elements did not intrude in our lives. The free society strikes a balance between our natural impulses and desires, and the cultural expectations of society at-large.

“A free society,” Goodman writes, “cannot be the substitution of a ‘new order’ for the old order; it is the extension of spheres of free action until they make up most of the social life.” While the move towards a free society can be gradual, it cannot occur without “revolutionary disruption,” of some areas of society, “e.g., war, economics, sexual education--any genuine liberation whatsoever involves a total change.”

After establishing the baseline for his manifesto, Goodman moves on to develop what he calls “A Touchstone for the Libertarian Program.” “The Touchstone is this,” he writes, “does our program involve a large number of precisely those acts and words for which persons are in fact thrown into jail?”

Goodman argues that only acts which are truly libratory are ones that are illegal because they threaten the established power structures. “What I urge is not that the libertarian at once bestir himself to commit such ‘crimes,”’ he is quick to qualify, “...but that he proceed to loosen his own ‘discipline’ and prejudice against these acts.”

By libertarian, he really means anarchist, and his call is not for anarchists to run out and commit acts of property destruction, or other acts mainstream society would consider violent, but instead to deconstruct the societal perceptions that lead to those things being considered violent and attempt to understand the larger implications of those perceptions.

How do we develop those perspectives? Where do they originate? From the oppressive power structures of our coercive society, Goodman would likely answer: “For most of us do not realize how broadly and deeply the coercive relations in which we have been born and bred have disciplined us to the continuation of these coercive relations.”

Goodman expands on his libertarian program by offering a critique of the revolutionary theory espoused by Marx and Engels, and demonstrates the futility in applying it to our modern society. He breaks down Marx and Engels thusly:

...the dynamism of the people’s revolution into socialism rises from the interaction of two psychological attitudes: (a) the spiritual alienation of the proletariat because of the extreme division of labor and capitalist productive relations, from man’s original concern with production and from natural social co-operation; (b) the brute reaction to intolerable deprivation brought on by the falling rate of profit and the capitalist crisis.

Goodman saw in his day that point (b) had been largely removed, or at least shifted to the point that instead of survival, the working class now struggles for better “standards of living,” taking the coercive nature of the system as a given.

Point (a) of Marx’s program had also undergone a dynamic shift, but in the opposite direction. “Marx saw wonderfully the emptiness of life in the modern system;” he writes, “but he failed to utter the warning that this emptiness could proceed so far that, without the spur of starvation, it could make a man satisfied to be a traitor to his original nature. What he relied on to be a dynamic motor of revolution has become the cause of treason.”

This situation, Goodman calls “sociolatry,” “the concern felt by masses alienated from their deep natures for the smooth functioning of the industrial machine from which they believe they can get a higher standard of living and enjoy it in security.”

In essence, this is an ideology that sells out the working classes’ own interests for the interests of the dominating class, and Goodman rightly rejects it. He further rejects the Marxist call for state socialism as the solution, arguing that true socialism “implies the absence of state or other coercive power.”

The revolution Goodman desires is not the sudden seizing of the state apparatus, but a revolution by degrees, slowly building until it culminates in a free society. The revolutionary process he envisions is the common anarchist vision frequently paraphrased as “building the new world in the shell of the old,” with small groups working by mutual agreement and mutual aid and developing ever expanding circles of cooperation and free association. There is a practical reason for this as, “Our action must be aimed not as utopians, at a future establishment; but...at fraternal arrangements today, progressively incorporating more and more of the social functions into our free society.”

Goodman expands on this with a six point program, which seeks to harmonize our natural lives and our social lives. This includes: reassessing our standards of living to something more in line with our natural “humane well-being;” working in jobs that realize individual and collective human powers and achieve human satisfaction; exercising direct initiative in local community problems “housing, community plan, schooling, etc.;” engaging in group psychotherapy to encourage members of the free society to cast off the shackles of the “alienated way of life,” they are otherwise forced to live; and, along the same lines, encouraging sexual satisfaction including in adolescents and children to prevent them from developing neurotic prejudices to their natural impulses, and an “anxious submissiveness to authority;” as well as “progressively abstain[ing] from whatever is connected with the war.” In this last point, he means the Vietnam War, but any of the state’s recent wars can act as an equally odious stand-in.

Of Goodman’s program, the only point that seems questionable is his advocating the sexualization of adolescents and children. While we understand that the puritanical browbeating that constitutes our current system of sexual education is inadequate to create people who can engage in sexual relations without domination or coercion on rational, emotional, and physical levels, I am skeptical that encouraging the sexuality of children or adolescents is a solution. Ultimately though, and I think Goodman would agree, it is up to the freely associating members of our society to determine for themselves and their children what are appropriate levels of sexuality and sexual conduct.

“The May Pamphlet” concludes with a section on “Unanimity,” in which Goodman emphasizes the importance of “Positive Action.” He writes “It is unprofitable to strive, in coercive conditions, for a relative advantage in a situation that, even if the victory is won, is coercive.”

He argues that there is no choice of a “lesser of two evils,” in natural ethics, so it is essential in a free society to take what one considers to be the morally correct position at all times. To do any less, to shirk the social responsibility shared by all members of a free society, is to limit our own free actions, and can lead to suffering and hardships only correctable through great sacrifice.

Thus, for him it is important that all members of society always be involved in “positive political action,” to engage in political and economic action and discussion in all aspects of their day-to-day lives. It is only when we make politics an integral aspect of our daily lives, that they become a natural part of our free society, and not an outside coercive force, exercising unwanted power and authority over us. This idea is among the finest examples of the anarchist ideal in print.

In “Some Prima Facie Objections to Decentralism,” also in the collection, Goodman makes the case for decentralism by addressing and debunking a number of the greatest arguments made against such organization. For him, it was important to respond to these objections as a means to challenge the increasing centralization of everything in our society, from the university, to the workplace, to the government. Such powerful centralization made it difficult for people to engage in society as free citizens, and make decisions that represented their own interests. The essay would later form the basis of the opening chapter in his book People or Personnel (1965).

Another of the collected essays, “The Black Flag of Anarchism,” traces the history of anarchism, and demonstrates how the New Left student movement of the 1960s drew inspiration from, and acted on, the philosophies and principles of anarchism, whether they realized so or not. Substitute the “Occupy movement” for “the student movement,” and what we have is an essay that is completely relevant to today’s social movements.

The “participatory democracy” called for by the students of the New Left, is the same organizational structure advocated by Occupy Wall Street, and its offshoots. This essay is notable not only because of its relevance to our own times, but that it first saw print in no less a mainstream media outlet than The New York Times Magazine in 1968.

What emerges in Drawing the Line Once Again is a collection of short works introducing the basic themes and concepts of Goodman’s writings. It is an excellent starting point for readers unfamiliar with his work to jump into an understanding of his ideas.

Throughout his works, Goodman’s success as a writer is in the clear and lucid ways in which he portrays often complex ideas. This makes the ideas, often contrary to conventional thinking, easy to not only comprehend but to engage with in a way that leads readers to new understanding. Where much political writing today drowns readers in jargon, or assumes levels of advanced scholarship, Goodman’s writing has the potential to reach a wider and more diverse audience, giving strength to his ideas that other equally intelligent writers might lack.

Note: Reviews of New Reformation, and The Paul Goodman Reader, two other PM Press reprints, will appear in our next two issues.