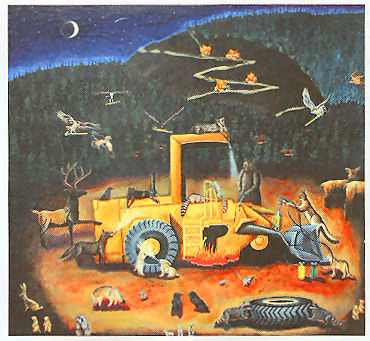 Some varieties focus more on primitivism, and emphasize the negative impact of industrial technology and the positive benefits of a return to a technological state better aligned with our evolutionary roots.

Others accentuate anarchism and the need to extract ourselves from hugely oppressive systems of power and control that actively prevent the free expression of our innate human nature.

Still others concentrate on the natural world and the need to establish ecologically-sensitive lifestyles and harmonious relationships with the biosphere (sometimes known as green anarchism). Regardless of the primary focus, the variants of AP share at least this in common: that global industrial civilization is a bad idea and needs to be stopped--very soon.

Some proponents of AP view the compound word, anarcho-primitivism, as redundant. Anarchism, at its core, is a rejection of hierarchical power relationships.

Primitivism, at its core, is the desire for physical and social conditions more conducive to an authentic human existence. These two concepts are not merely compatible, they are mutually dependent.

A lifestyle embedded in industrial mass technology is not possible without coercive systems of control. An authentic human existence is not possible within the mechanical schematic of hierarchically organized authority. Anarchy implies a return to the primitive and vice versa.

Technology is the obvious sticking point for anarchists who reject primitivism. Traditional anarchy typically views technology as a given, as a neutral substrate, and focuses instead on the need to collectivize power over its application, production, or distribution. But all technology beyond that of simple craft requires potentially oppressive systems of control. Interested readers can consult the works of Langdon Winner and Lewis Mumford for cogent and detailed discussions of the obligatory connection between technology and coercive power. AP is not anti-technology per se. Complex technology is simply recognized as inconsistent with the pursuit of free and authentic human lifestyles.

So what, according to AP, qualifies as a free and authentic human lifestyle?

One way of answering this is (perhaps ironically) to sample from the products of an advanced technology known as social science, specifically from an area of theoretical speculation and empirical investigation called evolutionary psychology. The basic premise of evolutionary psychology is that, as with much of human physiology, human psychology consists of evolved features that were fine-tuned as adaptations to life in Paleolithic hunter-gatherer band society. Because of the time course of natural selection in humans, the recent inclusion of domestication-based life-ways has not been incorporated into our genetically programmed psychological development.

An authentic human life, then, is a life lived in accord with our species’ evolved expectations. Global civilization is entirely at odds with these expectations.

Although several recent millennia of genocide and conquest have likely reduced or eliminated the expression of a variety of potential human traits, every child is born expecting the Pleistocene.

From a more practical standpoint, however, the real issue is what AP has to offer as a revolutionary posture. As anarchists, the global machine is our mutual enemy. Does AP imply courses of action that are different from those of other anarchist perspectives?

In terms of street-level, frontline activity: probably not. Perhaps you will find more AP-sympathizers at a tar sands protest than outside a G-20 Summit. But maybe not. And although direct action can take many forms, the fist of authority always wears the same uniform. Acts of insurrection and resistance by courageous anarchists on the frontlines are by necessity focused on the immediate and most conspicuous sources of oppression, and the less salient but more vulnerable parts of the system too often remain untouched.

How do we get behind the fist? Where are the soft parts of the system, and which ones should we target first? Does AP provide any special insight here?

Again, probably not. AP might offer some insight into how our evolved predilections are being abused, how our unfulfilled social and psychological needs have been crafted into shackles yoking us to the machine’s drivetrain. But potentially exploitable vulnerabilities of the global system are independent of any social-political perspective.

Perhaps it is only after revolution is in progress that some distinctions between AP and other anarchist perspectives begin to emerge. For one thing, AP is less likely to balk at relinquishing the products of capitalist techno-culture once they are no longer needed as insurrectionary tools. Continued reliance on the accouterments of civilization implies continued dependence on potentially oppressive systems of control, and thus restricts the scope of revolution.

Also, AP is no different from some other anarchist perspectives in stressing the importance of local self-reliance; local self-reliance not only promotes the disintegration of the global system, it also serves as a potential prophylactic against at least some of the ensuing consequences. But for AP, local self-reliance is not merely a means; it is an end in itself.

And then there is the question of what happens next. Where do we go after the global machine crashes? Here is where AP has something unique to offer.

In 1978, Masanobu Fukuoka wrote The One Straw Revolution, a book promoting a “do-nothing” approach to organic farming. Modern industrial farming attempts to force nature by imposing an artificial structure on the natural world. The do-nothing approach involves working with the land’s evolved propensities: simply scatter seed on an existing uncultivated field and allow the straw from one harvest to sit on the field and decompose naturally even as the next season’s crop is being sown. After a few seasons, the field is producing almost as much as a commercially cultivated and chemically treated field, and there is a net improvement in the soil season by season.

Industrial civilization forces us to live in an unnatural, highly “cultivated” manner, and by living in this way we destroy our environment in the same way that plants forced to live in industrial monoculture exhaust the soil. And, as with the crops of industrial agriculture, it takes an enormous amount of energy and resources to maintain our lifestyle because we are being forced to live in conditions that run counter to our evolved propensities.

Fukuoka’s solution is to stop the machines, let the soil and the plants do what they have been designed to do through several hundred million years of evolutionary fine-tuning. Likewise, the solution to restoring our social environment is to stop the machine of civilization, stop forcing our lives into conformity with an artificial and inhuman mode of being. Out of civilization’s remains will eventually emerge fertile ecological and social “soil” for nurturing all of our human needs. The problem will be one of stopping the cultivators, putting an end to the mechanical disturbance, and then having the patience to allow the dust to settle--and the fortitude to accept that the dust of civilization’s collapse will still be in the air that our great-great grandchildren breathe.

An AP interpretation of Fukuoka’s solution breaks down to two parts. First, we need to put an end to the mechanical cultivation. We need to stop the industrial machine that is devouring the natural world and degrading our humanity. Second, in its place we need to cultivate patience, we need to allow the “soil” to heal itself and reestablish its ability to sustain and nourish.

The first part will be the hard part. Perhaps impossibly hard. But we will be supported in the second part by our own evolved human nature.

It is worth repeating: every child is born expecting the Pleistocene.