Corvid College: Public Fire
Anarchy goes to college and no debt when you leave. 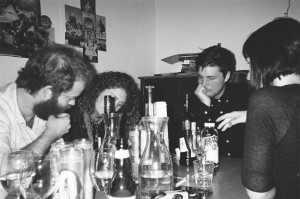 Is this a class? It is at Corvid College.

Forty-two years ago, philosopher Ivan Illich wrote, “I also believe that the end of the ‘age of schooling’ could usher in the epoch of a global schoolhouse that would be distinguishable only in name from a global madhouse or a global prison in which education, correction, and adjustment became synonymous.”

Illich’s nightmare may seem far off in its more Orwellian overtones, but there was a basis of truth in his words and they have come to fruition. Education, perhaps more than any other institutional sector, reveals this truth in a manner that is as undeniable as it is deplorable.

Nearly two and a half years ago, I co-founded Corvid, an anarchic * college in the Boston/Cambridge/Somerville area as a direct response to the basis of truth in Illich’s quote. Put bluntly, the road to the monocultural, global prison-school-factory/Black Iron Prison was paved by way of the information superhighway, and what Corvid College defined itself against was what Peter Lamborn Wilson terms Technopathocracy, that is, the rule of sick machines.

We did not arrive in this dismal place because of the Cold War or the George Bushes, 9/11, or the internet, nor any of the other images or trademarks that work in the service of History. We find ourselves here because of the way in which these vacant signifiers interlock to form the barren wasteland that is the “integrated Spectacle,” a worldview that only permits vicarious living while simultaneously oppressing the imagination and dictating what sensations are permitted.

The problem lies with us; in our failure to recognize how the technology we use manipulates us, and similarly, in mistaking words for the things they represent. It is in these ways that our routines and behaviors have come to betray our most personal freedoms.

The point as it regards education is illustrated in a remark that Beat artist Brion Gysin made concerning the transmission of occultism through the ages: “Magical training can only be passed through the touching of hands.”

The teachers with whom I co-founded Corvid College are committed to a life of being with others, a life of sharing, be it the sharing of knowledge and desires, time and space, laughs and memories, or simply books and wine.

In their continued distortion under Capitalism, “teaching” and “learning” were, we agreed, more refined means of social reproduction and oppression than the convivial way of life we knew them to be, thus, we revolted against them.

United by a shared passion for sharing knowledge in person, as well as good food and wine, the ex-professor from Montana, an Italian economic thinker, and myself (at the time a Harvard Divinity School student) began our experiment in education and unalienated our labor from the Megamachine.

What we immediately learned was that the degradation, bureaucratization, and outright betrayal of education by the institutions who claimed to be working in their service were not isolated occupational injustices, but personal affronts, as they barred our own ability to conceptualize and enact liberation as we once knew it, if only in moments and flashes.

The previous, negative inspiration for Corvid College was not even half the picture when it came to discerning the value of alternative education. Far exceeding any critique of capitalism, Corvid College’s significance is to be found in the ludic quality of the pursuit.

As the classes are organized on the principle of voluntary association, there are no grades or requirements to coerce students, and each class is free to mirror (or more accurately, existentially interpret) the subject around which it is organized.

Like proto-“bolos”, or budding tribal units, the removal of the institution in education allowed for the spontaneous blossoming of a natural anthropology, a sort of affinity group structure, which replicated the form and content of the topics being explored.

The Situationist reading group issued “pro-situ” propaganda (even if they would never use that term) for their urban interventions and drifts, the William Burroughs class made cut-ups of not simply the Bible and Shakespeare, but the idea of Corvid College itself, and the Art of Traveling Class roamed the winter wastelands of Cambridge only to be arrested as trespassers one fateful evening.

To quote a teacher at the San Francisco branch (co-founded six months ago), Corvid College is “a very simple idea” and as such very easy to duplicate. Named after the Corvidae, the family of birds that includes crows and ravens, It is diversely social without being hierarchical.

Unlike the “hassle castles” of institutional education, the college is nothing more than a group of like-minded individuals who are dedicated to sharing what they know or what they want to know with others.

We do not require any degrees to teach, nor any credentials to join a class nor offer diplomas; however, in place of the latter we have Corvid College patches and the “privilege of scars.”

We do not have a secretary, registrar, or dean, and all of the teachers handle their own students and economics. To give you an idea, when approached by someone who wants to donate to Corvid College, all I can tell them is that there is no “College” to donate to, only teachers or students, and that they are free to give the money as they like.

In fact, some classes do not even have teachers, but are composed of individuals who have gathered together to pool their knowledge on a particular subject and search out “experts” only when needed.

To speak quickly about economics, there is no policy in place and while a number of teachers in both the Boston and San Francisco flocks teach for free, others are convinced that money often acts as shorthand for commitment and in asking for a nominal sum one is actually receiving a promise of attendance.

My personal favorite mode of payment, along with I.O.U.s and barter, is what we have come to term “reverse bribery.” Following the idea of a student, “reverse bribery” is when a teacher charges a lump sum at the beginning of the first class and upon the completion of each progressive class returns a fraction of the funds to the student so by the time two-thirds of the class was finished, the student had all of her money returned.

And, if the student did not show up, then her money was used on snacks and drinks. But, enough about money.

One more thing, as there is a slogan that the ex-professor from Montana likes to say concerning the topic: as an old book teaches, the love of money is the root of evil, and that means you should, of course, not love it, but by the same token it does not deserve the energy it takes to hate it.

I will conclude by explaining the significance of our experiment in education being as enjoyable as it was unfettered. The first class I was involved in I co-taught with another of the founders on “The Coming Insurrection.”

I was unprepared for the stark fact that everything that has come to be understood as necessary for a college, like class rooms, dry-erase boards, grades, tuition, and bureaucrats, are expendable and are, more importantly, to be recognized as obstacles that detract from the simple pleasure of intentional conversation. Starting from the first principle of convivial association, Corvid College was able to assess what is truly needed to learn, namely, people who are interested.

From there, we began to recognize the most helpful teaching aids: wine, natural lighting like a sunset or a candle, and library books. Beginning from here, Corvid was able to grow according to pleasures and guided by curiosities.

Ignored or rejected by mainstream media, we were free to carry on as an association of “self-owning ones” and with classes ranging from “How to write Queer Smut” to Cyberpunk to The “Punk Philosophy” of Spinoza, we soon began cross-pollinating the counter-cultures in our expanding psychogeographic domain.

The dissimilarities between Corvid and a conventional college are important, for in the distance between each of the criteria, in addition to the criteria themselves, lies the evidence of the pleasure to be found in experimentations in anti-authoritarian living.

It is our birthright as homo ludens to enjoy the fruits of our labor while they are still ripe. So, join us at our fecund, educational orchard or feast elsewhere.

Whichever, we hope to see you with crimson lips, flush cheeks, and fire in your bellies at the occupations.

* As opposed to the more definitive “anarchist,” the term “anarchic” was adopted so as to illustrate our commitment to anti-authoritarianism beyond any prefabricated theoretical constrains. That is, in addition to Goldman, Kropotkin, and Proudhon, we wanted Rabelais, Nietschze, and Bugs Bunny in our educational pantheon.

About the college Name

The word corvid is a name applied to the Corvidae, the family of birds that includes crows, ravens, jays, magpies and jackdaws. The name symbolizes the non-hierarchical and diversely social nature of Corvid College.

Corvid College was founded in Boston in the fall of 2009. A new branch sprouted in San Francisco in the winter of 2011.

Corvid is a ‘self-managed in spirit, horizontal in structure,’ ongoing experiment in educational pedagogy, content, and structure. Corvid uses the college model as well as monetary exchange (as opposed to other educational processes like the freeskool or the skillshare group) to encourage sustained student commitment in a model of education as self-cultivation.

Unlike free skools, Corvid courses are not usually offered gratis. Prices are determined by the instructors and students on a flexible, sliding scale with the possibility for barters instead of money exchange and no potential student is turned away from participating in a course for lack of funds.

What is taught, how, and where is determined by teacher expertise and student demand. In theory, any topic may be taught for any price so long as a teacher and their students agree to it. “Hoedowns” in which students and teachers congregate, socialize, and discuss potential course offerings inaugurate each upcoming term. Previous course offerings have included: Street Art, Philosophy as a Way of Life, Magic: the Gathering, Cover Fire: A Survey of Blackouts, The Wild Within Us and Speculative Fiction, amongst others.