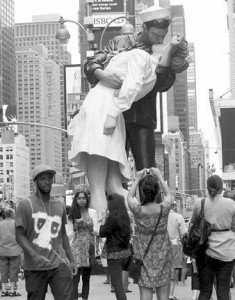 The iconic scene of a Navy sailor kissing a nurse following the Japanese surrender in 1945 is depicted in this statue, tellingly entitled, “Unconditional Surrender.” The three-ton sculpture is on loan to New York City from the Santa Monica Midway Museum since 2007, and sits in Times Square. It will soon be replaced by a permanent bronze version in December. Donations will cover the $1 million price tag. Rather than a surrender, the act today would be considered a sexual assault.

For years, no one knew the identity of the woman. Finally, in 1980, Edith Shain, wanting a copy of the photo, contacted Life magazine, where the image had appeared, and identified herself.

Eisenstaedt flew out to meet her and, as she put it later, “He looked at my legs and said I was the one.”

In an interview, Shain said that it was not only an unwilling kiss on her part but that she had suffered for years from a sense of embarrassment: “Someone grabbed me and kissed me, and I let him because he fought for his country. I closed my eyes when I kissed him. I never saw him.”

As the Los Angeles Times reports, afterwards, as she walked away, the married nurse encountered another soldier who wanted a kiss, but she left.

Read and seen one way, “Sailor Kissing Nurse,” as the image is sometimes called, circulates as an expression of pure patriotic joy. And certainly, we imagine that is what this sailor thought himself expressing.

Yet, even without knowing who the players were or how Shain felt, it is not hard to also see it as a picture of sexual violation. In light of her words, the violation becomes even more obvious: he grabbed her, she felt compelled to let him kiss her, to close her eyes, to never see his face, and she felt embarrassed about it for years.

Read this way, though less severe by comparison, Shain’s words and experiences, can be located in the context of more recent accounts of the sexual violence rampant in the military. The 2012 Sundance US Documentary Audience Award went to “The Invisible War.” The Seattle Post Intelligencer notes that this film, made by Kirby Dick and Amy Ziering, uncovers the horrors of tens of thousands of service women and men who are raped, mostly by fellow servicemen, and often superiors who are treated with impunity.

Sexual violence is not merely a symptom of the military, it is twisted into the fabric of its everyday life. Recently, the Canadian magazine, Xtra, published an exposé of homophobic bullying in the Canadian army. Here, soldiers report frequent harassment in the form of intimidation and name-calling; the hostility extends to women as well as gay men.

Xtra quotes Laurentian sociologist Gary Kinsman saying, “We’re actually talking about very dangerous situations for women in general, but also for anyone who’s openly identified as being queer, whether they are or not.”

Violence, consequently, does not only occur during wartime; the military is by definition a violent institution, and its violence, in both times of peace and war, takes the shape of rape and sexual assault against women and queers. Yet, somehow, all of this eludes the mainstream gay movement which celebrates the end of the U.S. military’s Don’t Ask, Don’t Tell (DADT) policy (which prohibited gays and lesbians from functioning as out service members) and waxes beatifically about how queers can now fully participate in the armed forces.

In anticipation of the end of DADT in 2011, then President of the Human Rights Campaign, Joe Solmonese, is quoted in a press release: “Tomorrow is a historic day for gay and lesbian service members and our nation as a whole. ‘Don’t Ask, Don’t Tell’ was a stain on our nation...”

The elation at the DADT repeal, and the unbridled celebrations that followed the September 20, 2011 end date have been perhaps best captured in iconic images that have gone viral on the Internet. They include a lesbian sailor kissing her girlfriend upon her return home, deliberately staged to imitate Eisentaedt’s photograph, and of two male soldiers kissing, one with his legs wrapped around the waist of the other, and several others. Such images turn our attention away from the violence of the military and focus attention instead on celebrating the idea that gays and lesbians may now serve equally in the country’s imperialist wars and be defined only by their love, a love assumed to be untouched by the violence of the state.

As we argue in our book, Against Equality: Don’t Ask to Fight Their Wars, the exultation over the DADT repeal erases the reality of the U.S.‘s role in perpetrating violence here and abroad. Even some progressives, including good friends of ours, lauded the DADT repeal, insisting that we should be able to separate the question of militarism and U.S. imperialism from the fact that the repeal ended one form of systemic discrimination.

We understand this as a liberal perspective which suggests that any move in the direction of inclusion is a positive one, and we realize the profound affective (and for members of the military, the material) impulse for espousing it. We vehemently disagree with this position.

The DADT repeal, the activism before it, and the celebration after it, reflect mainstream gay and lesbian people’s tacit acceptance and active promotion of militarism as a mechanism for national belonging. Not only does this then put gay and lesbian people in the position of accepting state violence as the conduit for their belonging, but it also reinforces the ways in which certain gay and queer subjectivities are taken up in the name of imperialisms, as countries like the U.S. now apply foreign policy pressure in the name of “gay rights.”

In December 2011, Hillary Clinton made a now-famous and historic speech on Human Rights Day in Geneva, where she declared that the United States would defend gay rights around the world. While this was lauded by straight and gay progressives alike, left and radical queers--who have a long, rich, and documented history of a critique of state apparatuses and the imperialisms they foster--could not but help be reminded of another, recent war on Afghanistan, and the fact that it was justified by Laura Bush as a way to ensure women’s freedom from the oppressive Taliban.

The question of the civil right to serve in the military must be connected with the bigger concerns of imperialism and military state violence so easily avoided with the popular focus on love and open service in DADT repeal discourse.

Given that gay rights, and human rights discourse in general, are used in the service of imperialism and that violence against women, queers, and people of color continues to permeate all aspects of the military apparatus, radical LGBTQ people should be the first to be ever vigilant and opposed to any expansion of the military industrial complex.

If we are not opposed, to cite Cynthia Enloe’s Does Khaki Become You?: The Militarization of Women’s Lives, from nearly 30 years ago, the khaki will not only become us, but consume us.

Against Equality is an online archive, publishing, and arts collective focused on critiquing mainstream gay and lesbian politics. As queer thinkers, writers and artists, we are committed to dislodging the centrality of equality rhetoric and challenging the demand for inclusion in the institution of marriage, the US military, and the prison industrial complex via hate crimes legislation. We want to reinvigorate the queer political imagination with fantastic possibility. www.againstequality.org

The collective’s second anthology, Against Equality: Don’t Ask To Fight Their Wars!, is available from againstequality.org, AK Press, and local independent bookstores.

Ryan Conrad co-founded Against Equality. His written and visual work is at faggotz.org.

Yasmin Nair is a co-founder of Against Equality, and the Policy Director of Gender JUST, a grassroots organisation working on social and economic justice through a queer lens. She is currently writing Strange Love: Neoliberalism and the Politics of Affect. Her work is at yasminnair.net