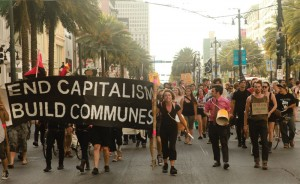 Anarchists lead the way in a May Day march. Authoritarian leftists tried to intervene in Occupy New Orleans but were rebuffed. --photo: N. Krebill

It was encouraging to see large numbers of anarchists and anti-authoritarians at a late March Occupy New Orleans General Assembly (OccupyNOLA). As one of the participants mentioned, Occupy is in many ways the most significant grassroots uprising since the Vietnam Era.

In some ways, it’s an even more important development, since it’s a break with the suicidal direction the Left has taken for most of the past century. It’s a break with top-down, hierarchical, authoritarian, patriarchal models of organizations.

What is now called “horizontalism” is really the anarchist ideal of grassroots, participatory, egalitarian, decentralist, non-authoritarian organization. The emergence of these dimensions of the movement, seemingly out of nowhere, constitutes the miracle of Occupy. The existence of these dimensions is the basis for the enormous liberatory potential still inherent in the Occupy Movement.

However, we have to recognize that when we (anarchists, anti-authoritarians, horizontalists) fail to take the initiative, the movement tends to deteriorate and revert either to futile liberalism or to manipulation by Leninist sectarianism.

The meeting, held in the city’s Washington Square Park, was a good example of the kind of dangers we face (though we met them extremely well!). For example, one Leninist sectarian who has hardly attended any OccupyNOLA meetings over the past seven months, showed up primarily to tell us, in an annoyed tone, that we are fools for adopting the very horizontalism that has most defined Occupy. And that he, in all his wisdom as a vanguardist non-participant, knows the true line that OccupyNOLA should follow.

In other words, we should endorse the same tired, discredited, statist path that almost everybody inside or outside of Occupy dismisses as a hopeless remnant of the discredited, zombie Left. Someone called the approach that he and a few others follow “authoritarian Communism.” That’s partly, but not entirely, accurate. Some of the people who advocate such policies are themselves authoritarian Communists, but the policies they advocate are watered-down social democracy at best, and, at worst, not much more than tepid liberalism.

We are not the idiots that this sectarian and similar people think we are. He depicts us as naive fools who have no connection to the realities of oppressed people.

We are not the ones who are naive fools. His ideology prevents him from recognizing even the most blatantly obvious realities in front of his eyes. As he must be aware (since he was often there), numerous anarchists and anti-authoritarians, for example, have participated in dozens of protests and marches against the destruction of public housing.

For a long time after Hurricane Katrina, the majority of participants in marches and protests defending public housing were anarchists and anti-authoritarians, coming especially from the huge number of volunteers of the Common Ground Collective in the first several years after the storm.

We did not march and protest because we thought the substandard, undemocratic, oppressive housing provided by the authoritarian state is suitable for dignified human beings, for our neighbors and fellow-citizens. We marched and protested because we realized that the state and capitalism were engaged in a virulent form of racist ethnic cleansing of New Orleans.

As bad as public housing is, the state and capitalism had even worse things in mind for poor and minority people. We are not as stupid as this sectarian assumes. We are quite capable of seeing a glaringly obvious evil and working to resist it.

The same sectarian had shown up at a panel on housing at the Worker Cooperative Conference held here in New Orleans in 2008. His sole purpose for coming was to complain that by promoting co-operative housing we were propping up capitalism.

It was the same story--you’re idiots, wasting your time if you don’t follow our Party Line. Panel-member and longtime community organizer, Malik Rahim, replied by saying that he didn’t believe in public housing. Which is the right position. Statist housing has to be turned into community-controlled housing.

Of course, we’ll work with and defend public housing residents in order to fight racism and oppression, but we also see beyond the limitations of statist housing. Malik long ago participated in an action that showed the correct direction for public housing to take. When the police opened fire on him and other Black Panthers in the Desire Projects in 1970 five thousand community residents blocked the police. They occupied their own community. Pseudo-“public” state control needs to be replaced by direct community control.

In the post-oil spill period in 2011, we had a strong, bitter taste of how sectarian manipulation works. The Revolutionary Communist Party (RCP) came to New Orleans to organize an “Emergency Committee” that for a long time specialized mainly in recruiting for the RCP, raising funds that were not collected or distributed locally, and adopting statements to read to a usually nonexistent press during increasingly minuscule demonstrations.

At the first post-oil spill assembly, a local RCP apparatchik dominated the meeting in order to guide it into following a predetermined sectarian agenda. When one group member objected that there should be more emphasis on long-term local health issues rather than just debating and adopting formal statements, he denounced her as “unprincipled.”

When another woman who was working with coastal communities was silenced on similar issues, she gave up and walked out of the meeting, only to be similarly condemned. It’s striking how often such manipulation targets women, partly on the assumption that women will cede power more easily, but also because women tend to focus on more non-instrumentalist concerns.

The RCPer’s choice of words, though harsh and cruel, was in a certain sense accurate. A sense to which he was completely oblivious. The Greek word for “principle” is “arche” and the women who objected to his domineering tactics were being “an-archic.” They were rejecting abstract and manipulative “principles” for the sake of the welfare of real communities of people.

At the recent General Assembly meeting, one newly-arrived sectarian tried to convince us that the Occupy Movement is becoming irrelevant because it hasn’t followed some zombiesque sectarian agenda with a list of “demands.” Another critic chimed in, invoking the anti-slavery movement as an example of a movement with demands.

But the overriding demand of the anti-slavery movement was the abolition of slavery. Its demand was not that slave-holders should provide slightly better housing for the slaves who toiled for them. The main demand of the strong anti-capitalist faction of the Occupy Movement is the abolition of the system, not that the state provide some inadequate housing to the slaves of capitalism.

Our critic probably doesn’t know it, since we haven’t seen him for months, but OccupyNOLA has been disrupting property auctions in which people’s houses are being seized and sold.

Disrupting auctions is making a very concrete demand: that the city stop seizing people’s houses and selling them. Stopping an auction by direct action is a much more powerful expression of demands than RCP-style adoption of statements ad nauseam followed by press conferences to read them ad nauseam.

Do not let authoritarian statists take over Occupy and destroy its radically participatory, anti-hierarchical structure. Remember the fact that Occupy is a “floating signifier.” There is no given “essence” of Occupy. We, the participants, make it what it is, and what it will be.

There are many anti-authoritarian, anti-hierarchical, participatory, horizontalist elements to work with that offer tremendous potential to make Occupy something of great historical importance. Another crucial aspect of Occupy is its capacity to function as a “transitional object.” For all its enormous potential, Occupy’s amorphous form and ambiguities create certain limits.

We can, however, work to push Occupy to its liberatory limits and then move on to a new level of historical development.

But we must remember that the price of liberty really is eternal vigilance. There’s no room for slacktivism. The vampires of revolution, RCP, Workers World, the ISO, and other groups, are always ready to pounce.

We can be one part Dada, but we also have to be one part Durruti. All power to the imagination--along with iron discipline in solidarity with the community.