Return to Liberty Square
Occupy Wall Street, the COOLS, and the Cultural Resistance of Story Telling 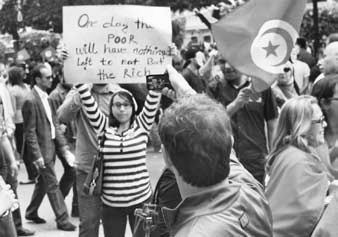 Demonstrator at a May Day demonstration in Tunis, Tunisia holding an English language sign. The Fifth Estate first publicized the slogan but stole it from Terry Southern’s The Magic Christian. Photo: Fedele Spadafora

Early this year, people involved with the Occupy Wall Street movement in New York City started talking about the COOLS, the Cultural Occupation of Liberty Square. The point was to get as many people possible back into Zuccotti Park, dubbed Liberty Square, where the movement began. The police carried out a mass eviction from the lower Manhattan park in November.

This effort was not as much about recreating anything from Occupy’s origin last fall as keeping the conversation going, keeping the stories of resistance moving forward into different directions. To ground these conversations, we needed public spaces to remain open, specifically Liberty Square serving as our commons. Like the Agora in Greek city spaces, Liberty Square would serve as our gathering space.

Each day at lunchtime, a different writer, storyteller, academic, or movement person is invited to take part in the COOLS. Recently, I was invited to speak about the top five achievements over the last 25 years of AIDS Coalition to Unleash Power, better known as ACT UP. A few older veteran ACT UP folks showed up, as did three younger AIDS activists involved with transgender and international AIDS work, two members of the Occupy Farms working group, as well as two older men involved with Occupy from the very beginning.

Working within Paulo Friere’s popular education model, we shared information about ACT UP and its zap on Wall Street a quarter century ago.

The strength of the session grew out of the willingness of COOLS participants to share what they knew with each other, so we could all learn something. Some coming to the COOLS turn their sessions into didactic teach-ins or lectures. This misses the point that we are extending a conversation.

Some weeks, these conversations link the lessons of the Feminist Sex Wars of the 1980s with debates about safer spaces in the movement. Hopefully, we can learn the lessons of the linkage of censorship with feminism, while supporting fierce defense of public sexual culture with self determination and autonomy. Other sessions involve debates about the diversity of tactics stretching back to the days of broken windows at the WTO demonstration in Seattle in 1999. Another session involved the history of May Day and general strikes.

Sometimes we meet at Zuccotti just to dance.

On other occasions, we took bike rides to throw seed bombs into fenced off vacant lots which could become community gardens.

The conversations at the COOLS take countless forms and directions. At their root, each had to do with questions about public assembly, freedom of expression, autonomy of bodies, social relations and our imaginations. We addressed the question of how can we add more voices and tactics to the movement, rather than attempting to stifle or censor those which we find objectionable.

On March 18, we marched from the COOLS to Judson Memorial Church in Greenwich Village, where the southern Freedom Riders departed from a half century ago, and Occupiers crashed after their eviction from Zuccotti Park in November of last year. The church hosted a theater festival + direct action + housing rights education/outreach event titled, Occupy the Empty Space in its main hall, recently the venue for the annual New York anarchist book fair. This free event included 15 new plays and eight teach-ins by activist groups, including The National Lawyer’s Guild, Time’s Up!, Picture the Homeless, Queer Rising, and others.

Sarah Duncan, a playwright and one of the organizers of the event, explained the idea behind the title: “[It] came from the Peter Brook book, The Empty Space. But really, it’s fitting on more than a theatrical level. Space is so valuable these days, and yet it is often abandoned or wasted.”

“In NYC there is a ‘lack of space,’ or so it seems.” She said, “but really, there is plenty of it. Apartments, parking lots, all sorts of shelter and open areas, but they’ve been purchased by large corporations who aren’t doing anything with their real estate except separating valuable resources from those who need it.”

After all, the best activism is theater. Judson is a space where performers have long taken their theater to the streets, restaging what life could be like in New York City. We’ve had villains such as Robert Moses, a reckless “master builder” taken on by heroes such as Jane Jacobs, known for organizing grassroots efforts to block urban-renewal projects that would have destroyed local neighborhoods, the Freedom Riders, and ACT UP launched from there. Each advocated the need for a different kind of stage, in which everyone has a voice, not just those with the access to power and money. Occupy the Empty Space continues this tradition.

“What attracted me to the occupy movement, initially, was it’s horizontal nature,” noted Kate Foster, playwright and the other organizer of Occupy the Empty Space.”

“There was no climb,” she said, “there was no pyramid of who was in charge. Everyone had the power and the capability to make something happen. Sarah and I have taken that model, a model for a leader-full movement, and applied it to theatrical process. How can we celebrate everyone? How can we stay non-commercial and still selective? How can we be selective and equally inclusive? It’s a valuable conversation to have, not just in terms of this event, but in the larger context of theatre community and entertainment industry.”

In December 2011 I met Duncan when we took part in Occupy Broadway, a 24-hour outdoor theater festival on which Occupy the Empty Space was modeled. The city’s artists introduced tourists and New Yorkers going to Broadway shows or shopping themselves into debt to the idea of occupation as creative resistance with non-stop, free performances.

We set up in a privately owned public space (POPS) near Times Square, turning once blandified space into ones for cultural production. These POPS, 503 public spaces at 320 buildings, are where builders are granted waivers by the city to erect many additional floors above original smaller structures.

With the push to tramp on our rights of assembly, public space, and by extension democracy itself, the point of Occupy Broadway and the Empty Space was to join a global struggle using occupation as a form of creative resistance. Occupy Broadway was a symbolic attempt to regain the space of theatre as an accessible, popular art form, bringing it back to where it all started; in a public space, for the common person.

We are using public space to create a more colorful image of what our streets could look like, with public performances, art, and music. Through this movement, New York re-imagines itself as a work of art, rather than a retail shopping mall. With capitalism gone mad, foreclosures increasing, and bank crises consuming whole communities, we are signaling through the flames that there is another way of living.

Our slogan is simple. “Occupy public space. Reclaim democracy. Enjoy the show. We’re all part of the show! Get off the sidelines and break through the fourth wall.”