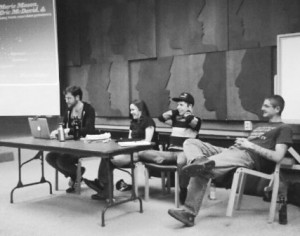 The Never Alone national tour hit 30 cities in April, speaking to hundreds about long-term anarchist prisoner support. It focused on the cases of Eric McDavid and Marie Mason, using multimedia presentations and included strategizing about how to effectively encourage a culture of resistance and support. Above, from the left, Jason, Jenny, Ian, and released political prisoner, Jeff “Free” Luers at a tour stop at the University of Oregon in Eugene, Ore., April 26. Photo from becausewemust.org. The tour raised nearly $7,000 after expenses which will be split between McDavid and Mason support groups. To offer support, donate, or get information about the cases, go to</em> supporteric.org and supportmariemason.org. Info on the tour at http://neveralonetour.wordpress.com.

For Ambrose’s continuing service to the government in the prosecution of environmental activists, he has received another reduction in his nine year sentence for the same crime of arson which has Mason imprisoned for 22 years as a result of his providing information and cooperating with the government against her.

In 2007, the Michigan FBI began investigating five people, including Ambrose, Mason, and Waters, for involvement in two incidents of eco-sabotage attributed by the government to the Earth Liberation Front (ELF).

First, the arson of a GMO lab at Michigan State University in East Lansing on New Year’s Eve 1999; and, second, the arson of logging equipment in Mesick, Mich. the following day. I began representing Waters in October, 2007 as a project of the Michigan/Detroit Chapter of the National Lawyers Guild (NLG).

Jesse was ultimately indicted only for the arson of the logging equipment the day before the ten year Statute of Limitations expired. The indictment was then sealed for 14 months. After the indictment was unsealed, a number of NLG attorneys and law students assisted me in researching and drafting several pre-trial motions in Jesse’s case.

Hagen Frank, the government Assistant U.S. Attorney handling the prosecution of Jesse’s case made an offer to permit him to plead guilty to a reduced charge.

Jesse and I met several times to discuss this, after which he decided to accept it. In September 2011, he appeared in Grand Rapids federal court and pleaded guilty to one count of Misprision of a Felony, the felony being the arson at the MSU building. Misprision of a Felony is an old common law crime that prohibits helping to cover up a crime, and failing to report it to government authorities.

The original charges against him were dismissed.

Jesse’s decision to accept this plea was not an easy one. This is a non-cooperation plea. He has not participated in any debriefings with government agents, and will not assist the government in any way in any investigation of environmental activists. The case against Jesse was not very strong. The main government witness at trial would have been Ambrose, who became a professional government “cooperating witness.” Ambrose was the main witness against his ex-wife Mason and two other associates.

In 2007, Ambrose decided to get rid of documents and equipment associated with the Earth Liberation Front (ELF), but instead of shredding and destroying the evidence, he packaged the items up neatly in boxes and deposited them in a suburban Detroit dumpster. An employee of the business that owned the dumpster noticed the boxes, looked at the contents, which included writings by Ambrose, a gas mask, an M-80 explosive, and other of his possessions.

The local police were called who notified the FBI, which used the information to obtain a search warrant for Ambrose’s house,

and seized his computer. The computer contained substantial evidence of Ambrose’s involvement in numerous incidents of property destruction.

Ambrose obtained an attorney who promptly turned him into a government snitch. He then went around the country re-activating his old political contacts, and taping conversations and phone calls with them, including with his wife, Marie. Ambrose was and is sacrificing everyone he can, including Jesse and Marie, in order to obtain a reduction of his own prison term, which he has apparently successfully accomplished.

With respect to Jesse’s case, Ambrose would not be a very convincing witness by himself, in light of his motivation to get out of prison early. The other main witness for the prosecution against Jesse would have been another cooperating co-defendant, Detroiter Stephanie Fultz, who had pleaded guilty in the Marie Mason case. She voluntarily participated in de-briefings with the FBI and eventually testified before the grand jury against Jesse. Fultz would have been a much more credible witness because she had been sentenced to a term of probation before Jesse was indicted, and was not receiving further benefit for her testimony.

But the main impetus for Jesse’s decision to settle this case was the draconian sentence he would have faced if he went to trial and was convicted. He faced a mandatory minimum prison sentence of at least five years. In addition, he would have been sentenced pursuant to federal Sentence Guidelines calculated with a “terrorism enhancement,” which would have resulted in a recommended minimum prison term of up to 22 years whereas the possible sentence for the Misprision conviction is probation up to 36 months in prison.

In preparation for Jesse’s sentencing, we submitted almost 35 letters from his relatives, friends and supporters. The letters were articulate and very powerful. The federal prosecutor said they were the best group of sentencing letters he had seen. They clearly influenced him, as he made a number of statements favorable to Jesse during the sentencing proceedings.

About 20 family and friends traveled across the state to attend the hearing where U.S. District Judge Robert Holmes Bell, imposed a sentence of six months incarceration. Jesse has appealed his sentence to challenge the application of the terrorism enhancement to the sentence guidelines for a minor offense like misprision.

Jesse has been assigned to a federal prison camp in Ohio.

The NLG repeats over and over again, “DON’T TALK TO THE FBI!!”

Federal agents are very persistent and adept at getting people to make statements that are against their own interests. The two other peripherally involved co-defendants in Marie’s case, Fultz and Aren Burthwick never would have been indicted if they had talked to the NLG in advance, and had been prepared for how to deal with the FBI.

The statements they made, which they thought would help them, instead provided the critical information needed to indict them. And, if they had not been indicted, Jesse never would have been.

Secondly, All activists should be cautious about whom they trust. If someone suddenly shows up and wants to talk about legally questionable activities from the past or suggests crimes, get away from that person immediately. Consult an attorney from the National Lawyers Guild for more specific advice.

Supporters can write Jesse Waters at:

The Never Alone national tour hit 30 cities in April, speaking to hundreds about long-term anarchist prisoner support. It focused on the cases of Eric McDavid and Marie Mason, using multimedia presentations and included strategizing about how to effectively encourage a culture of resistance and support. Above, from the left, Jason, Jenny, Ian, and released political prisoner, Jeff “Free” Luers at a tour stop at the University of Oregon in Eugene, Ore., April 26. Photo from becausewemust.org. The tour raised nearly $7,000 after expenses which will be split between McDavid and Mason support groups. To offer support, donate, or get information about the cases, go to supporteric.org and supportmariemason.org. Info on the tour at http://neveralonetour.wordpress.com

John Royal is President, Michigan/Detroit Chapter, National Lawyers Guild. Nationally, they can be reached at nlg.organd in Detroit at michigannlg.org.