Voices of the Underground
Book Review

As you can see by the type on our cover, the Fifth Estate is approaching its 50th anniversary of radical publishing. This makes us either the longest or one of the longest running English language anarchist publications in U.S. history. The “either or” is due to from what date you count our appearance as an explicitly anarchist paper. 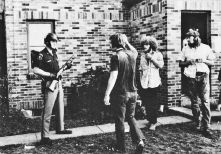 Ann Arbor cops raid a 1970 underground press conference. The author of this review asks a question typical of the era, “What’s goin’ on?” (photo: David Fenton)

For the first decade of its existence, being one of the first of the so-called underground papers of the 1960s, the Fifth Estate was a quintessential tabloid of revolution, sex, dope, and rock and roll of that era. We are now, some would say sadly so, mostly concentrated on the first item.

By 1975, with the Vietnam War ended, legal civil rights achieved, and young activists in a state of exhaustion from a decade of non-stop action, almost all of the 500 or so opposition papers had ceased publishing, and the Fifth Estate was close to its last gasp as well.

That year, a group of us calling ourselves the Eat the Rich gang, took over the ailing paper, animated by the ideas of ultra-leftism, Fredy Perlman’s writing, primitivism, and anarchism. The tabloid format, which once published weekly, now appears three times a year as a magazine, and as the FBI report we often quote states, we continue to “support the cause of revolution everywhere.”

Our intention back then was not to become history, not the subject of another era of contestation and defeat to be chronicled by historians. Rather we simultaneously sought world revolution and the Age of Aquarius, and immediately. “Now!,” was the operative word. However, as time advanced, neither of our visions occurred.

As it turns out, our older issues and what they convey about the era, are valuable sources of accurate information about the forces of opposition, acting as a counterweight to the distortions and lies of the mainstream media.

Most accounts of the underground press of the 1960s give only short attention to the Fifth Estate, understandably concentrating on the larger circulation papers such as the L.A. Free Press, The Berkeley Barb, and The East Village Other. Or, they pretty much ignore us as in recent books such as John McMillian’s Smoking Typewriters: The Sixties Underground Press and the Rise of Alternative Media in America. It gives only passing mention to the Fifth Estate, concentrating instead on The Paper which published in East Lansing, Mich. for four years.

This complaint isn’t about getting credit for which we expected none. But the Fifth Estate, being a half century chronicle of the anti-war, civil, gay, and women’s rights, Detroit rock and roll, League of Revolutionary Black Workers, Black Panther Party, White Panther Party, GI and draft resistance, and that’s just from the 60s, would seem to be a much richer source for historians than some of the other short lived, narrowly focused publications.

So, thank you, Ken Wachsberger, for Insider Histories, which includes a long account of the Fifth Estate’s early years, written by a key participant, Bob Hippler, entitled “Fast Times in the Motor City: The First Ten Years of the Fifth Estate.”

Also included is an appendix by FE staffer, the late Pat Halley, who relates the story of him throwing a pie in the face of the Guru Maharaji, an act for which he almost paid for with his life when he was attacked by cult followers seeking revenge.

This is the third volume of what will be four books in Wachberger’s Voices of the Underground series, a four-volume collection of histories of underground papers from the Vietnam era as told by key people on each of the papers.

Hippler captures this publication well in his account, as do the numerous other authors who recount tales of life at papers such as Mississippi’s Kudzu, the feminist It Ain’t Me, Babe, and in general accounts of life during that heady decade. Stories in the series represent the gay, lesbian, feminist, Black, Puerto Rican, Native American, military, prisoners’ rights, socialist, new age, rank-and-file, Southern consciousness, psychedelic, and independent anti-war voices of the era. The foreword is by feminist pioneer Susan Brownmiller.

From Insider Histories back cover blurbs:

In an era when events linger in popular memory for increasingly smaller increments of time, the Voices from the Underground series serves us all by bringing back to life those rebel shouts and rants, as well as the thorough critiques and criticism, that marked the 1960s and ‘70s oppositional press. Without a World Wide Web or the Internet to connect and inform those who refused the official version of events, it fell to the intrepid youth of that period to create a lively media that unraveled lies, put forth a vision, and gave a clenched fist and a raised middle finger to power.