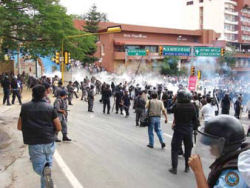 As happens frequently in Mexico, police responded to a 2006 protest in the city of Oaxaca by
indiscriminately beating demonstrators and bystanders.

“Leave us your money and go home” isn’t published in Mexico’s tourist propaganda, but is the underlying theme behind promoting maquilado Mexico (“Mexico cosmeticized”).

In this fabricated fairyland the realities of malnutrition, unemployment, war on drugs-related crime and political repression don’t exist.

“The more money you have the more welcome you are” is extended not only to tourists but to investors and potential investors. Tourism as part of neoliberal marketing economy is a product like sugar, like steel, to be sold for the highest possible profit. Drug cartel domination of the countryside, shantytown slums, oil-crusted beaches mitigate profits; consequently, they have to be camouflaged and an alternative devised, an Oz splayed across curtains that prevent viewing what exists behind them.

Tourists in Mexico are much like late-night revelers in a dancehall or hotel lounge. That some of the locals are wearing heavy makeup or attired in contrived pseudo-opulence doesn’t matter if they’re entertaining to talk to, dance with, even spend the night with.

“A week’s vacation, I came to relax, to enjoy myself. I can’t change the world. I don’t want to try,” a visiting California mathematics professor told me. Enjoy what he could and not look beyond.

“Enjoy what you can” extends beyond tourism. It’s the offering extended to the country’s one-hundred and fifteen million inhabitants, the vast majority of whom watch television and listen to the radio.

Outgoing president Felipe Caldern’s administration spent over twenty billion 500 million pesos--nearly one billion 700 million dollars--on publicity during his 2006–2012 presidential term “most of it misleading and much of it entirely false,” according to editorials in the Mexican newspaper El Universal. Those figures don’t include the billions poured out for the ornamental Estela de Luz monument in Mexico City, lavish centennial celebrations which only invited dignitaries were permitted to attend and alterations to historical sites, including the pyramids of Teotihuacan and the Basilica de Guadalupe.

The creators of Fantasyland Mexico understand that a population struggling economically to survive, men and women working two or three jobs, clinging to a few possessions, lacking both time and mobility, is relatively easy to control. The struggle to earn a living, to survive, creates intellectual passivity. Alcoholism increases, curiosity diminishes. Television replaces community--or becomes community, a common denominator, a cultural unifier. One-hundred and fifteen million people, from Tijuana on the U.S. border to Cancun on the Caribbean, see the same telenovelas, hear the same news analyses.

Although viewers perceive that in their own non-fairyland lives they confront very different, often degrading if not actually dangerous circumstances, this Fantasyland-mirror, television, tells them that they are exceptions, that they are not in sync with the norm. Not only does it control--transform--individual and family life it supplants many aspects of communal life. Becomes a nationally shared pseudo reality.

That this pseudo-reality is trimmed in U.S. colors makes touristed places more comfortable for visitors. In them one can buy U.S. products, watch cable television, communicate through internet. Golf tours, nightclub tours, culinary tours proliferate. (No slum barrio tours or indigena village tours; slum barrios and poverty-wracked indigena villages don’t exist in Fantasyland.) In many locations it’s difficult if not impossible to find Mexican-made goods or Mexican-grown fruit or vegetables.

Even the drug corporations cooperate with the pretty picture painted for tourists. The few U.S. casualties among the more than 90,000 victims of so-called War on Drugs have been Mexican-Americans with dual citizenship or persons connected with government operations (U.S. consulates, the CIA). The drug exporters, like the Televisa/government, don’t want to bite the hand that feeds them: U.S. citizens are the drug corporations’ principal customers.

Although ostensibly privately owned and managed, television in Mexico is intricately interwoven with the federal government. The government has been one of its principal advertisers, promoters and confederates since television wedged its way into Mexican households after World War II.

For a populace that historically has had a high rate of illiteracy and semi-literacy television is a pervasive force. When it is the only source of news and entertainment it becomes so webbed into daily life that it becomes a basic part of existence like buses, electricity, beer.

During President Caldern’s six-year term, the television duopoly consistently aired his boasts about creating jobs, the country’s economic solvency and its successes against narcotics commerce, boasts that exaggerated and misrepresented the facts.

When anti-government marches, takeovers of roll booths, environmentalists chaining themselves to trees, hunger strikes to regain employment and blockades of foreign-owned gold-mining contamination appear in news reports they are presented as criminal activities or the work of dissidents attempting to destroy Fantasyland.

The propaganda controlled media glorifies the slaying of drug corporation capos as victories in the war against organized crime despite evidence that six years of military intervention has increased, not decreased, drug-connected profits, the numbers of individuals participating in the trade and the amount of territory the so-called cartels control.

“How can people believe this b.s.?” I asked a suburban Mexico City video maker.

“They don’t,” he replied. “They know it’s a lie. But the truth has become so mangled it’s impossible to sort through it. So most people shrug off what government politicians say. They just try to get through today and see what they have facing them tomorrow.”

The greatest danger to this artificial reality is that someone will break through and expose what really is happening. One person--even one small community--disrupting the fantasy can be thrust aside as deviant, ignorant--even criminal--but united protest efforts have to be repressed before they become too strong.

Mexican police and military beat, tortured, raped and arrested hundreds at Atenco in the Estado de Mexico in 2006 and in Oaxaca the same year to prevent anti-administration demonstrations from becoming area-wide or nationwide movements. For nearly thirty years armed military have surrounded the Zapatista communities in Chiapas in southern Mexico to “prevent the cancer from spreading,” as one of President Ernesto Zedillo’s advisors commented.

A force of over 1,500 state and federal armed military and police violently quashed a student protest in Michoacan in October 2012, beating and arresting hundreds in a state wracked by corruption and drug-related crime. That no equivalent large scale operations had been launched against criminal organizations in that state demonstrated which the governing elite considered to be the greater evil: gangland violence or organized protests. The gangs--the drug-exporting corporations--are part of the status quo, the protesters are not.

Television and most of the rest of the media routinely report anti-government marches, takeovers of toll booths, environmentalists chaining themselves to trees, hunger strikes to regain employment and blockades of foreign-owned gold-mining contamination as criminal activities. They glorify the slaying of drug corporation capos as victories in the war against organized crime despite evidence that six years of military intervention has increased, not decreased, drug-connected profits, the numbers of individuals participating in the trade and the amount of territory the so-called cartels control.

That is not to say that the artificial Mexico created for tourists and residents isn’t fragile. The curtain needs to remain in place, the actors (politicians, television producers and personalities, NAFTA-benefited entrepreneurs, etc.) need to stick to the script. Revelations about the emperor’s new clothes have to be repressed or the emperor (those same politicians, television personalities and entrepreneurs) incur drastic income reductions.

In much the same way that slums and poverty-wracked rural villages remain out of sight to visiting tourists, drug commerce-related violence has remained behind the Wizard’s curtain. The drug corporation capos and their acolytes have tremendous amounts of cash at their disposal--cash that they invest in so-called legitimate enterprises, including tourist facilities.

Fervent competition to construct larger and more elaborate marinas, beachfront hotels and condominiums, Five-Star resorts and extravagant sports facilities straps available financing: Insertions of ready cash are always highly appreciated. Not only the capos but bureaucracies of underlings associated with them purchase million-dollar homes, airplanes, ranches. They number among the expensive tourist resorts most lavish clients.

“The more money you have the more welcome you are” knits transnational entrepreneurs, drug exporters, tourists and foreign governments eager for oil, gold and silver and lumber with a mythology of Aztec and Mayan heroism, brightly costumed and carefully choreographed traditional dancers, colonial architecture and resort-strewn tropical beaches.

“The less money we have the less welcome we are.” Those of us who live behind the Wizard’s curtain, excluded from Fantasyland, numbed by television, cannot eat words, cannot clothe ourselves in propaganda. The wizard is in danger of losing his curtain.

When that happens poverty-ridden Mexico will again be the real Mexico and the tourists will have to see what’s really here or pocket their money and go back home.

Robert Joe Stout freelances from Oaxaca, Mexico. His books include Why Immigrants Come to America: Braceros, Indocumentados and the Migra and Blood of the Serpent: Mexican Lives, two novels and hundreds of articles and essays in various publications.