New Orleans Free School Network
We are all students. We are all teachers.

“In the New Orleans Free School Network, people are there because they want to be. There are no grades, people are free to participate, but they don’t have to.”

This is how John Clark, Loyola University professor, activist, and a network founding organizer, understands the difference between traditional education and the alternative he and others established in 2010. 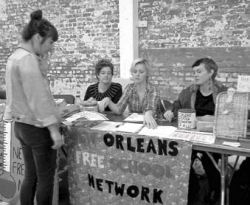 When we visited his house earlier this year, Clark greeted us warmly and showed us into his dining room. What we saw filled us with joy and surprise: a packed room full of about twenty young people eager to learn about anarchist theory. No one paid to be there, no one was being paid to be there; they were simply there to learn.

It was this moment that the endless potential of the Free School struck. A dining room can be a classroom; anywhere can be a classroom, a space free of bureaucratic and monetary constraints, where the only exchange is that of ideas and perhaps a bowl of red beans and rice.

The New Orleans Free School Network (NOFSN) was born from this kind of anti-authoritarian enthusiasm for education.

In December 2010, a group of activists from all over the country gathered to create the network sharing a passion for social justice, alternative economies, and most of all, the development of accessible, relevant, community-based education. We were all inspired by the rapidly spreading Free School (or Skool) movement, with different networks and groups popping up all over the world.

Frank Boomer, a NOFSN founding member, says he was inspired by the activities of Free Schools in Washington DC and Baltimore. “I saw people doing radical GED classes for people with language barriers, and I thought that would be really cool in New Orleans.”

In the beginning, the organizers all shared the anarchist politics of many other Free School projects, believing that traditional education was hierarchal, oppressive, and stifled the potential of the mind and spirit.

We were moved by theory and practice of Paulo Freire and other radical educators who encouraged us to deconstruct the power imbalance in education, to challenge the patriarchal notion that students are simply empty heads to be filled and teachers are ultimate authorities. We were all tired of knowledge being held hostage in a cage of institutional authority and knew there had to be another way.

Knowledge is meant to be exchanged, not transacted.

These are politics we still uphold now, almost two years later. “We are all students, we are all teachers”, the slogan we have held dear from the beginning, concisely expresses these politics. It is a simple slogan, but is in no way a simple idea.

Everyone knows how to do something, whether cooking, dancing, or writing, but not everyone believes they can teach these skills. Further, many people are hesitant to accept that these things they are doing are in fact skills.

We seek to dispel the notion that one must be an expert in order to share and broaden the narrow scope of what counts as legitimate knowledge. There is no reason why a physics class should take priority over a cooking class. These hierarchies silence the voices of those who have valuable things to share with their communities. The network provides an infrastructure to amplify these voices.

By blurring the line between teacher and student, people start to realize their knowledge is valid and important, that they don’t need a university degree to share their skills.

Many teachers have expressed that they’ve learned a great deal from their students, or perhaps gained a new perspective on their skill.

Brett Guadagnino, a long time NOFSN teacher, says he values this kind of input in his World in Knots class. “There’s always multiple ways to tie knots, some are faster, whether left or right handed. I found many times with more basic knots, people knew how to tie them different ways.

Learning how to teach something in different ways gives you a more complex way of understanding.” This radical outlook on teaching keeps classes dynamic and accessible to everyone.

The original organizers gained inspiration not only from their own radical ideas and research, but also from the long and prolific history of Free Schools around the world. Many people have come in and out of the network, but every single one entered the project with some previous knowledge of other Free Schools. From California to Toronto, radical education is spreading rapidly, like weeds breaking through concrete.

Free Schools all over the world may have common roots, but grow and germinate in various ways. NOFSN’s decision to add “Network” to our name was an effort to be consistent with our mission to provide free education for all. We understood the limits of our budding organization, but knew how to maximize our potential and resources.

New Orleans is an incredibly diverse, yet insular city where neighborhoods and communities stay close. We knew it would be impossible for a group of young radical transplants, some of us new arrivals to New Orleans, to reach the entire city with our classes. We decided that our network should stretch beyond our own web of classes, but also other free community classes around New Orleans. Our online calendar is not limited to the classes proposed though our structure, but full of free classes and opportunities all over the city, all diverse both in subject and location.

Recently, we have added a kids and teens section to our calendar to highlight free classes for young people. We recognize the dire need for children and teens to have fun and educational opportunities outside of their official schools. A high crime rate paired with a low graduation rate of 49.7 percent makes it obvious that getting New Orleans kids into positive learning environments is crucial to their health and safety.

Several schools in New Orleans have eliminated recess, for either lack of budget or to accommodate a packed curriculum, so students sit all day in sterile buildings with few outlets for creative stimulation. The NOFSN recognizes that children need physical and creative exercise in order to learn and grow.

To help address this, we developed “Field Days” as an outdoor educational activity day for all ages. These events take place in parks and public spaces and include food, games, sports, and skill building activities. This decentralized, autonomous space is a safe and fun way for children to get exercise and educational attention outside of their school institution.

While we recognize we are in no position to replace traditional schooling, we seek to be a liberating supplement; a breath of fresh air. While NOFSN does not yet offer our own kids classes, we strongly support other youth educators and are hoping to start kid’s classes and workshops in the near future.

One difficulty preventing us from having children’s classes is a lack of a schoolhouse. Not having a consistent funding source has prevented us from creating our own space, though there are many plans to address this currently being discussed.

While having a building would be a wonderful resource, we also embrace the decentralized, DIY nature of our activities and classes. Our classes take place in community centers, dining rooms, backyards, and outdoors. We enjoy having a visible and viral presence.

The motivation and energy surrounding our activity is contagious. Since its energetic origin, our project has grown and evolved considerably. We have seven dedicated organizers and countless supporters, and have supported more than 60 classes, many of them ongoing and facilitated by a changing and collaborative group of teachers.

They include everything from food fermentation to carpentry, to Russian, American Sign Language, human sexuality, and philosophy. The course structures vary from more traditional models such as discussion sessions and presentations to the hands on practice of skills.

The classes have grown into their own communities. Lena, our dedicated knitting teacher, says, “People in my class are calling me, asking me knitting questions! I can’t stop doing it because they would all be disappointed.”

Our harm reduction class and human sexuality working group are providing invaluable resources and support to our community. The Introduction to Time Banking course is creating an alternative to the capitalist economy, while Ladies Night has been smashing the patriarchy even before they became an NOFSN class!

NOFSN has become a self-sustaining entity. Organizers and teachers can come and go, but the network will continue to thrive. The decentralized nature of our organization lends to the network having a life of its own; we are simply there to take care of it.