Operation 8: Terror Down Under
New Zealand government repression against Maori people and their supporters

-- Rewi Maniapoto, leader of the armed resistance against colonial settlement in New Zealand, at the Battle of Orakau, 1864

It is hard to imagine the reach of the United States if you have never lived outside of it. In New Zealand, it is pervasive and simultaneously invisible: ideas, culture, and laws are imported and imposed. Following 9/11, New Zealand (NZ) jumped to ratify its own version of the US Patriot Act.

Here it was called the Terrorism Suppression Act. In 2002 when it was passed, I had no idea that I would become one of the first people against whom this law would be used. In 2007, I found out. 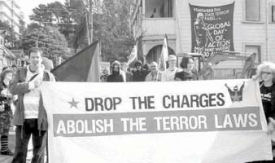 More than 300 police carried out “Operation 8”--dawn raids on dozens of houses all over Aotearoa New Zealand. Police claim the raids were in response to “concrete terrorist threats” from indigenous activists. Along with 16 other people, I was held without bail awaiting the decision of the Solicitor-General whose permission was required for the police to bring a charge of “participation in a terrorist group,” against us.

The people arrested were primarily Maori (the indigenous people), many of whom were actively involved in the struggle for their iwi (tribal) sovereignty. Tame Iti, one of the country’s most well-known Maori political activists, was deemed the ringleader. The remaining arrestees were anarchists, including myself, involved in a range of worker, environmental, anti-war, and animal rights issues.

The primary allegation was that we had all attended paramilitary training camps in order to devise plans and learn the skills to assassinate leading political figures, including George W Bush, NZ’s then Prime Minister, Helen Clark of the nominally left-wing Labour Party, and the conservative leader of the opposition John Key (now Prime Minister).

The primary evidence was video surveillance from cameras installed in the bush around the areas where the training camps were held. The grainy imagery shows some people wearing balaclavas, some carrying firearms, and some people carrying flaming objects in what the police say was training in throwing Molotov cocktails. All of this was on Tuhoe land, in the bush. Additional evidence included intercepted phone calls, text messages, conversations from bugged vehicles, and a number of firearms found when the raids were carried out.

Despite a massive police propaganda campaign and compliant media, public skepticism emerged almost immediately. Thousands of people took to the streets in major NZ cities and a campaign for our freedom was launched.

A month later, sitting in my prison cell, I listened as the Solicitor-General announced on national radio that he was “unable to authorize the prosecutions under the Terrorism Suppression Act,” against us. I screamed with unimaginable joy. They could not charge us with being terrorists. The following day, we were released on bail still facing charges of illegal possession of weapons including Molotov cocktails.

Unlike the U.S. where the right to bear arms is guaranteed by the Constitution, in NZ, arms legislation reverses the burden of proof for possession of weapons. In other words, you have to prove you are innocent--or in legal terms that your possession is “lawful, proper and sufficient.” It is a high threshold.

A racist operation from start to finish

On the day of the raids, police and special forces carried out a paramilitary invasion and blockade of the Tuhoe village of Ruatoki. They stopped, searched and profiled every car and person trying to leave the valley.

Tuhoe are one of the largest iwi in New Zealand with some 40,000 claiming Tuhoe ancestry. They have remained in their ancestral lands in Te Urewera in the North Island. They continue to live in their traditional ways, have communal ownership of land, a subsistence lifestyle of hunting, fishing and growing kumara (sweet potato), and speak Maori as their first language.

They never signed the Treaty of Waitangi, the 1840 document that the state claims is the basis of its legitimacy and sovereignty in the land it occupies. As far as Tuhoe are concerned, they never ceded sovereignty to anyone.

The colonial history between Tuhoe and the NZ government is the same as what occurred in other European occupations of native people’s homelands: extreme state brutality, land confiscation, cultural annihilation, and later attempts at assimilation. More than a million acres of land was stolen from Tuhoe and turned into national park.

In 1916, the colonial police force invaded Tuhoe territory to arrest a man named Rua Kenana, who was regarded as a prophet by his people. Ostensibly, the police wanted to arrest Rua for violating liquor laws. In reality, he was a threat to the state.

Rua actively urged his people to refuse to fight in World War I for a government and the British Empire that had stolen their land and killed their people. During this raid, Rua’s son and another man were murdered by police, and Rua was arrested. He was subsequently tried and sentenced for the minor offence of resisting arrest to a year of hard labour followed by 18 months imprisonment.

This incident and others like it loom large, not just in Tuhoe history, but in the memories of old people still alive. Colonization is not ancient history for Tuhoe; it is a recurrent reality.

Today, Maori sit at the bottom of every social indicator. In particular, New Zealand has the dubious distinction of imprisoning its indigenous population at one of the highest rates in the world, roughly 634 per 100,000 people, compared with a rate of 192 per 100,000 for the majority pakeha (white) population. Despite its self-delusional image of harmonious race relations, the statistics tell a very different story.

Tame Iti, arrested on the day of the recent raids, is a leading proponent of Maori sovereignty. He routinely uses theatrics for political goals. In 2005 he orchestrated a re-enactment of the 1860s scorched earth policies carried out against his people by using burning cars. As a result of his activities, he has been the subject of sustained state surveillance.

For nearly forty years, Tame has held camps in the native forest, sometimes to help young people get out of gangs, sometimes to teach alienated Maori traditional ways, sometimes to help people overcome drug and alcohol dependency, and sometimes to discuss politics and introduce pakeha to life in the forest. He seeks to make links between activists throughout the world and the Tuhoe struggle.

Over the past five years, a painful and expensive legal process has played out through the courts. The state brought an additional charge of participation in an organized criminal group against five of the defendants. These five--Tame, Rangi, Urs, Emily and Tuhoe--were deemed to be the ringleaders.

A crucial point came in September 2011 when the NZ Supreme Court issued a ruling on the admissibility of police evidence. We challenged the legality of police video surveillance cameras placed around Ruatoki, including in the local marae (a meeting house similar to a church).

The court surprisingly ruled all of the video evidence had been illegally obtained, but unfortunately, the case didn’t end there. In NZ, evidence must be both illegal and unreasonable in order to be excluded. The court said that the evidence could not be used against those of us charged only with the firearms offenses, but it could be used against the five since they faced both firearms charges and the more serious criminal group charge.

By the time of the decision, Tuhoe had died from stress related to the case.

In the week that followed, the state dropped all of the charges against the 13 facing only firearms charges. The remaining four would go to trial.

Eventually, a jury trial was secured, although the state had sought to deny even that. The trial ran for five weeks. The illegal video was played on the national nightly news for all to consume.

Despite charges being dropped against 13 of us, we were still very much a part of the state’s case, and evidence gathered against each of us was used against our comrades on trial. The criminal group charge is one of the worst pieces of law since it is effectively a guilt by association charge, and no actual criminal offence needs to have happened or even been planned.

Nevertheless, despite the state’s imaginative narrative of terror and mayhem, the jury didn’t quite buy it. They couldn’t come to a decision on the criminal group charge; it was a hung jury. However, they did find the defendants guilty on firearms charges, hardly surprising given the high threshold for any person to prove their innocence.

At sentencing, it was clear that the judge bought the state’s story. He said a private militia was being established. Despite firearms convictions routinely receiving a fine, Tame and Rangi were sentenced to two and a half years in prison. Urs and Emily, deemed by the judge to be followers rather than leaders, were sentenced to nine months home detention.

Court battles are defensive by nature, and while we are tied up trying to stay out of jail we are not engaged in the struggles on the streets, in the forests, or in the factories that matter to us. That was one aim of Operation 8: repression of dissent--remove lots of troublesome people for a long time, use fear as a tactic to deter others, and disrupt people’s lives by making it costly to defend against charges which ultimately were contrived.

The other aim of Operation 8 was the reinforcement of institutional white supremacy by violence. The anti-terror raids were aimed at the entire Maori community. Many saw them simply as a continuation of a legacy of state brutality and the repression of aspirations for tino rangatiratanga--sovereignty.

New Zealand, like all white settler colonial states is fundamentally illegitimate, and is deeply fearful of its indigenous population. The state is founded on racist theft and violence. The indigenous peoples of the world are the greatest threat to the illusion of legitimacy for nation-states.

Operation 8 was an exercise in reminding NZ indigenous people who is in control, consigning the Maori worldview to irrelevancy, and repeating a history from which we seem forever unable to learn or escape.

Valerie Morse is a Wellington, New Zealand-based anarchist and anti-war activist. She grew up in Tucson, Arizona and misses the beautiful Sonoran desert every day. She loves kitty cats, gardening, political hip hop, and social revolution.