Why is Marie Mason in the Fed’s Harshest Prison?
Supporters ask for a transfer 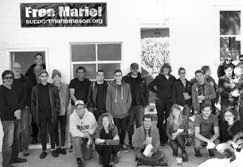 Crowd at last year’s exhibit of Marie’s art at a Chicago gallery.

Supporters of imprisoned environmental activist Marie Mason, are fearful that the repressive conditions she currently experiences could worsen when a construction project inside of her unit in a Texas high security prison is completed.

Mason, serving almost 22 years in prison for non-violent eco-sabotage, is held in a high security, restrictive facility of a larger women’s prison at the Federal Medical Center-Carswell in Fort Worth.

In February, Mason’s attorneys filed a law suit against the U.S. Department of Justice to discover the reasons, known only to the federal Bureau of Prisons (BOP), why she was transferred in 2010 to the notorious Carswell unit after spending over a year at a Minnesota medium security facility as a model prisoner.

Attempts by Marie’s lawyers to discover the reason for her unwarranted transfer to much harsher confinement conditions, using the Freedom of Information Act [FOIA], have been thwarted, suggesting there is much the government is hiding.

The feds claim they are withholding records because her case involves ongoing criminal investigations. The actions to which Marie pled guilty occurred in 1999 and 2000!

The severity and injustice of Marie’s sentence can be seen in a recent appeals court decision in April that vacated the 15-year sentence of an arsonist who started a 2010 Detroit fire after prosecutors admitted the term violated a 7-year plea deal.

Detroiter Samson Wright admitted starting the fire in a store that injured seven firefighters including one who was paralyzed and whose life is told in the documentary “Burn.” Marie agreed to a plea deal which should have resulted in a sentence of only 15 years, but here the presiding judge intentionally ignored what had been agreed upon.

Seven years for grievously injuring first responders with cash as the motivation compared to Marie who hurt no one by her actions and was inspired by the desire to protect the earth.

Marie’s attorney, Susan Tipograph of New York City, who filed the suit, says her client is a political prisoner. The complaint she filed in Washington DC states in part, “Mason is one of many activists who have been labeled a domestic terrorist for engaging in activities with the potential to disrupt corporate profits and, as a result, received an unduly harsh sentence for crimes that are routinely punished with much less severe consequences.”

Marie is locked down with prisoners who the government designates as the most dangerous inmates, and those convicted of what they consider egregious crimes. Carswell holds Aafia Siddiqui, who was convicted of attempting to murder U.S. service personnel at Afghanistan’s Bagram Air Force base, and a Colombian revolutionary, known as “Sonia,” as well as some who are awaiting execution.

Siddiqui was framed to cover up the fact that she was accidentally shot by U.S. soldiers; the accusations against her were brought as a cover-up. See her support site at freeaffia.org.

The fear is that Marie’s wing, which currently houses up to 20 women prisoners, will be transformed into a supermax facility or control management unit once construction is completed, where the overtly political prisoners will be placed and have their few remaining privileges removed.

Besides the legal front, Marie’s supporters and those of Siddiqui are increasing the effort to secure the release of all women held in the Carswell cement hellhole in which no one belongs. On March 30, more than 40 protesters gathered at the prison gate to demand freedom for the women political prisoners held here, which also includes the famed, but ailing activist attorney, Lynne Stewart.

Taking it right to the dungeon gates rips off the veil of secrecy the BOP hopes will keep their Bastille-like dungeons out of public consciousness. The demonstration was organized by a socialist group and while it focused mainly on Siddiqui, they recognized the plight of her sister prisoners.

Marie’s world-wide support group is launching a campaign which calls upon the government to transfer her to a minimum security prison and one closer to her Michigan friends and family. Please write respectful letters to the Director of the Federal Bureau of Prisons, Charles E. Samuels, Jr., Federal Bureau of Prisons, 320 First St., NW, Washington, DC 20534 requesting that Marie be transferred out of the Carswell administrative unit.

The effort is currently taking shape at our press time, but the details will be available at her support web site supportmariemason.org. A mass response requesting her transfer will hopefully be effective, so we urge readers to make their voices heard.