Editor’s Note — The San Francisco Mime Troupe will perform Saturday, October 28 at 8:15 in The Detroit Institute of Arts Auditorium in a benefit performance for the Fifth Estate. The Mime Troupe was in Detroit last Fall and received rave reviews (from us) for their “Civil Rights in a Cracker Barrel.”

“You can’t be a radical for just one season,” R.G. Davis, director of the San Francisco Mime Troupe, told this reporter. “You have to be able to sustain yourself—you can’t stop investigating what is the truth.” 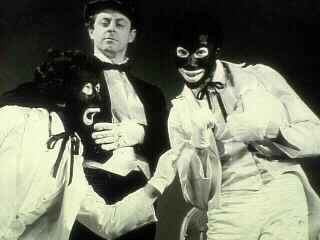 The Mime Troupe has sustained itself as radical theatre for some eight years now—investigating the truth in its workshops and performances. It is now planning a climactic, perhaps last, tour of the United States to bring its art and ideas to as many people as possible.

Ronnie Davis describes the Troupe’s work as “guerrilla theatre”—guerrilla in the basic sense, not only of radical opposition to the vested interests in this country, but of “operating on a very thin margin of survival.”

The Troupe, Davis explained, has to “adapt to its environment,” taking advantage of various opportunities to get money, to attack, to withdraw—“We want to attack and win.”

Peter Cohon, an articulate trouper, describes the Troupe’s work as a “life act,” as opposed to a “point of view.”

“When you buy a ticket to see even the most radical show,’ he explains, “that ticket makes the show part of the profit system, only a vaguely disturbing point of view. In this way dissent is the delusion of freedom.”

The Mime Troupe is now in its sixth season of doing free shows in San Francisco’s parks. This is the Troupe’s life act, taking theatre out of the Lincoln Centers and bringing it where the people are.

R. G. Davis originally organized the San Francisco Mime Troupe within the Actor’s Workshop of Irving and Blau (recent flops in New York) in 1959. The Troupe performed a Mime Show for free after regular performances at San Francisco’s Encore Theatre.

In 1962 Davis left the Actor’s Workshop, realizing the impossibility of having radical theatre within a company depending on establishment doles, and started from scratch—with an ad in the papers announcing tryouts.

For the next 4 years the Troupe resided and performed in The Abandoned Church in San Francisco’s Mission (Mexican) District.

In that theatre the Troupe launched its series of controversial productions, from “The Root” (a Commedia Dell’arte adaptation of Machiavelli’s “Mandragola” first of the Troupe’s free outdoor productions) and “Ubu Roi” (which won the Troupe some international recognition to a series of underground films and the Troupe’s own Minstrel Show “Civil Rights in a Cracker Barrel.”

However, the Mission District couldn’t support a theatre. The Troupe decided to get out in the streets more, rent theatres when needed, and, in 1965, it moved to its present offices at 924 Howard St.

Mime as practised by the Mime Troupe, should not be confused with pantomime. Davis describes the difference as that between the work of Charles Chaplin and Marcel Marceau. In pantomime the artist uses no props, but creates, as Marceau does, the illusion of working with these props. The mime is more concerned with the clash of ideas than with technical gimmicks, and uses any and all props, including his voice, to portray these ideas.

Mime differs from ordinary theatre, explains Cohon, in that it is “a ballet of ideas. We don’t want people to empathize but to judge.”

The productions of the Mime Troupe, not surprisingly, have embraced many forms. The Troupe has presented established radical plays such as “Ubu Roi”, Brecht’s “Exception and the Rule”, De Ghelderode’s “Chronicles of Hell.” It has adapted plays by Moliere, Machiavelli, and Goldoni as Commedia productions; it has written its own plays.

The Minstrel Show, written by Saul Landau and Ronnie Davis, was an extremely provocative and exciting use of the minstrel show format to raise disturbing questions of Black Power before CORE began considering the phrase (and when SNCC only mumbled it).

In 1961 the Troupe took the idea of happenings into the theatre and staged a happening with real actors and technicians, calling it an “Event in the theatre.” Lights as well as acting were improvised. In one scene five people and various stuffed arms and legs rotated and gyrated on a bed talking in everyday tones.

Much of the Troupe’s material has grown out of improvisation, and the Troupe has continued to work with a variety of forms.

In the spring of 1967 the Troupe launched a Vaudeville Show, two more Commedias, and staged Jean-Paul Sartre’s “Condemned of Altona,” adapted as “The Condemned” and presented with appropriate Vietnamese film clips.

But the Troupe’s importance far exceeds the quality (higher this year than in the past) and controversiality (undiminished) of its productions. The Troupe has been an important seedbed for radical activity.

Saul Landau’s film series in The Abandoned Church gave S.F. its first showing of Genet’s “Chant D’Amour” (and the ACLU a defendant).

Luis Valdez left the Troupe to join the grape strike in Delano and organize El Teatro Campesino, the farmworkers own theatre, which produces skits based on improvisations of standard situations between stock characters (the broker, the boss, the scab)—the basic ingredients for a modern commedia.

More recently, in the winter of 1965 through 1966, the Mime Troupe ran a series of rock dance benefits (two at the Fillmore auditorium) with light shows. Bill Graham quit as the Troupe’s business manager, leased the Fillmore, and went into the rock business on a grand scale, becoming the manager of the Jefferson Airplane.

At the first Mime Troupe benefit another group, including Troupe member Phil Lesh, decided on ‘its name just in time for Ronnie to announce The Grateful Dead.

The Troupe was the moving spirit behind the formation of the Artist Liberation Front, whose only notable achievement was a series of beautiful Free Fairs -small, groovy, decentralized Be-ins in scattered minority areas of S.F.

Around the same time, August ’66, a minority faction in the Troupe began distributing its position papers around the Haight-Ashbury and picked up support on the street.

After a series of long, introspective company meetings this spring the Troupe is concentrating on making arrangements for its coming tour. Tours are not new to the Troupe. In 1960 it took its first show to Reed College and has been touring periodically ever since.

Last year the Troupe’s commedias toured much of California and the Minstrel Show went on a nationwide tour, receiving rave reviews from Seattle to New York and an obscenity bust in Denver. The Minstrel Show had one subsequent tour before being retired.

On that trip three members of the cast, including Mr. Davis, were busted on pot possession charges in Calgary, Canada. It took the Mounties three searches, with what one Troupe member called their “instant handy pot implanter,” to find “residue” in Davis’ jacket pocket.

The Troupe will tour with its two current commedia productions, Olive Pits and L’Amant Militaire. Olive Pits is a short commedia about a poor farmer who tries to beat the system and gets screwed (so does his daughter).

L’Amant Militaire, one of the Troupe’s finest productions, was adapted from a play by Goldoni. It concerns a young Italian’s dilemma, being drafted to fight for the Spanish army which is settling Italy’s internal problems. It is an excellent anti-war play.

The tour is planned to last throughout the fall and winter and, says Davis, ‘may lead to London.”

After the tour, Davis continued, “there may be another season in the parks—we may disband and take a vacation for a year.” Eventually Davis wants to start a radical, nonprofit booking agency for the “underground, college, and dropout circuit.”