The Reasonable “Madness” Of Revolt
Isn’t it crazier to submit? 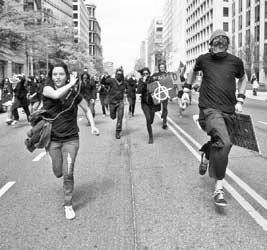 In the existing world, largely governed by the logic of capital and the pathologies of accumulation, real madness is the absence of revolt.

Wherever revolt is absent in the world today, we should worry about human health and sanity. A society that does not revolt against a social order that damages it with such escalating facility--psychologically, collectively, ecologically--is a society at the terminal stage.

Revolt is the healthy expression of reasonable refusal.

For those who want to throw the existing world into question, the liberal political philosophy of John Rawls (1921--2002) is of little use. After the publication of his first major work, A Theory of Justice (1971), Rawls became the most influential liberal philosopher of the second half of the 20th century, receiving accolades and awards from scholars, and from politicians like Bill Clinton.

He remains a touchstone intellectual for contemporary liberalism, and as one of its greatest advocates. Rawls is relevant to considerations of the disastrous limitations and contradictions of his own worldview.

Among Rawls’ many errors, the most fatal was his contention that “justice” and “fairness” could be satisfactorily realized within the limits of capitalist society. This same premise continues to ground the most fundamental liberal conceits, including that perplexingly unshakable faith in “capitalist democracy.”

Like most liberals, Rawls never took riot, revolt, or revolution seriously since he viewed them as superfluous to the interests of the “least advantaged members of society,” as he frequently called them. Instead, Rawls devoted his life’s work to theorizing a “practical” way toward that greatest of all contradictions in terms, a fair capitalist society. Most liberals agree with these contentions, making it fair to conclude that they scarcely understand the logic of capital, and the countless catastrophes of capitalist society.

Having said this, Rawls’ famous distinction between the “reasonable” and the “rational” is convincing and useful for purposes other than his own. Here, I shall use it to make the case for the rationality and reason of revolt. Rawls writes:

Reasonable persons are ready to propose, or to acknowledge when proposed by others, the principles needed to specify what can be seen by all as fair terms of cooperation...Some have a superior political power or are placed in more fortunate circumstances;...it may be rational for those so placed to take advantage of their situation...Common sense views the reasonable but not, in general, the rational as a moral idea involving moral sensibility.

In other words, if something (in thought or action) can be made to make sense, then it has an accessible rationale, and is thereby “rational.” Everything that is understandable, explicable, or that can be comprehended from someone’s experience and point of view, is rational. If you murder someone in a jealous rage, in a “crime of passion,” the action is rational to the extent that we understand why you did it, even though we can say it was unreasonable at the same time.

What makes something reasonable, according to Rawls, is its “moral sensibility,” the idea that it is the right thing to do, that it is fair. There is always your rational self-interest, and then there is what is good for the community, and sometimes (not always) the two are mutually exclusive. In many cases, there is a rationale for doing X, but it is more reasonable to do Y instead.

Part of what is good in Rawls’ definition is that he makes it difficult to be “irrational.” To be irrational, one has to do or think something that cannot be understood, that is totally inexplicable--that cannot be made to make any sense. Throughout history, this has been the plight of the “mad,” of “madness”--a history of horrific misunderstanding.

But if something can be given a rationale, then it is at least rational, even if it is not the right thing to do (i.e., reasonable). On this view, we can say that rioting and terrorism are rational, even when we do not want to call them reasonable. We cannot disqualify thoughts and actions as irrational as long as they embody and reflect grievances we are capable of understanding.

Plato understood this point well, as he argued against the sophists, those “professional intellectuals” who sold ideas to the sons of wealthy families. In Plato’s Meno, Socrates engages in discussion with one of Meno’s slaves to prove that the slave possesses intellectual capabilities that must not be denied. Eventually, Meno’s slave comes to feel that he has “spontaneously recovered” knowledge, an epiphany that was dialectically aroused.

The problem with the Meno case is that the midwife for the slave’s epiphany is the guidance of the most iconic philosopher of all, Socrates; so the slave cannot take full credit for his achievement in the end! But often, there aren’t any knowing philosophers, iconic, professional, self-proclaimed, or otherwise, helping to make philosophy happen. Sometimes social upheavals arouse the deep questioning and epiphanies. Often, nothing “does” philosophy better than revolt.

We could affirm Alain Badiou’s statement that “as a philosopher, I never accept the world as it is.” Good philosophy throws the world into question. But no conventional text can expect to be as provocative or compelling as creative, unpredictable uprisings that seize attention and ignite imaginations.

Revolt is the activity of radical criticism. Revolt is a philosophical modality, a way of doing and of surpassing the work of professional intellectuals. In short, we must rethink riot, insurrection, and revolt as modalities of rationality and reason.

When we speak of insurrection, we need not invoke some narrow notion of armed militant factions in a stand-off with state power. We can recover the word’s 15th century meaning, which is defined by the idea of “a rising up.” The risings-up of insurrection start from within a system or place, and involve going against from within, making problems from inside.

And, insurrection says something legible about the system in which it rises up, even when its opponents deem it “irrational.” The question is: What does it have to say about the social, political, or economic systems in which it occurs?

In the wake of the riots around London in early August 2011, Darcus Howe, a West Indian writer and broadcaster in London, was interviewed on the BBC. From his perspective, it was quite clear that the riots were an insurrectionary expression of youth defiance against constant police brutality and racism throughout many London boroughs. Howe understood the riots to be telling us that there was something seriously wrong in the country.

As he put it, “what is obvious is that these young people will go on relentlessly...They’ve seen Syrians, Libyans, Egyptians and insurrection. I don’t think four months jailed in a miserable little hole will change them. It’s a different set of youths today. That’s been going on since I landed here 50 years ago, now it’s almost complete. I think this insurrection is the last stop in its completeness.”

Whether or not one agrees with Howe’s analysis (and he was at least wrong about the insurrection of 2011 being the “last stop”), he is rightly interested in the rational and reasonable content of the events. Meanwhile, Howe’s interviewer at the BBC would not recognize the existence of anything sensible in the riots, because her position expressed the general view of the opposition in power, denying the upheavals any rationality or reason, reducing the whole expression to an aberrant, senseless episode of violence.

Insurrection doesn’t seek new government. New government makes new betrayals, and hopefully, brings forth the reasonable criticisms of new insurrection, as was demonstrated by the uprisings against Egyptian president Morsi in the summer of 2013.

To be sure, many uprisings do not have revolutionary content, for they occur in response to contested election results, court decisions, or even electrical blackouts; masses of unruly, clamoring people breaking down doors are sometimes mobilized by the shopping prospects of Black Friday in the U.S., or a new Nike sneaker debut (i.e., a so-called “riot” at a mall in Orlando, Florida, in February 2012). But even a frenzied mass of consumers stealing sneakers and TVs expresses something quite serious about a culture, if we want to listen!

More reliably, the messages of insurrection are written by those who want to live in a different world, perhaps an impossible world, a world that’s coming-to-be would negate what is.

This is why uprisings appear irrational from the point of view of power, because they speak a different language altogether. The demand to “be rational” is much like the demand to “be practical,” which essentially means playing by the rules of the game.

Everyone knows that “rational people” write letters to editors, vote, and abide by all of the laws. But it is exactly this “rational-practicality” that the most radical elements always reject, and for good reasons, which is to say that there are other reasons and other rationalities, ones that are excluded by the ideological narrowness of those who defend existing conditions.

Revolt is largely about wrenching open that narrowness so that we can see other “rationalities.”

Insurrectionary movements exceed the diagnostic and prescriptive efforts of scholars, and everyday people are capable of discovering (as they have been discovering in uprisings across Middle Eastern and North African countries, in the wave of occupation movements, and in Spain, Turkey, Brazil and elsewhere) that they are the midwives, which puts them beyond the subordinate relationship of Meno’s slave to Socrates.

In a world such as ours, madness is best expressed by the absence of revolt. We are not worried but reassured by occurrences of riot, insurrection, and revolt.

The various risings-up of insurrection are realizations that madness may find its antidote in the activities of everyday people who throw the world into question.