With Conviction: Art and Letters from Behind Prison Walls 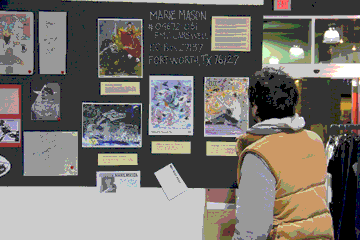 “With Conviction: Art and Letters from Behind Prison Walls,” was displayed in January at Sacramento’s Exhibit S Gallery featuring prisoner art, letters, and zines. Chicago-based Anthony Rayson and Michael Ploski, amassed hundreds of pieces of original artwork rarely before exhibited beyond prison walls including four acrylics from Marie Mason seen above.

The opening on January 14 was a packed house and heard a talk by Rayson on the assembled art as well as one on Marie by jenny from the Sacramento Prisoner Support crew.

For a related video, The Literature of Revolt, visit https://www.youtube.com/watch?v=h0GXOxg75I8