Hypocrisies of the Left
In their search for leaders to revere, socialist sects defend the worst dictators, but they’ve done this since the days of Stalin & Mao

The hypocrisies of hierarchical political organizations know no bounds. Of this we can be certain. However, we shouldn’t be cajoled into thinking that the political right have a monopoly on contradiction and duplicity.

As far as it plays the game of modern power politics, the inconsistencies and follies of The Left (comprised of communists and socialists) rival those of any rightist grouping. The modern-day disciples of the dead men with beards are by no means immune to the worst effects of dogmatism and myopia. 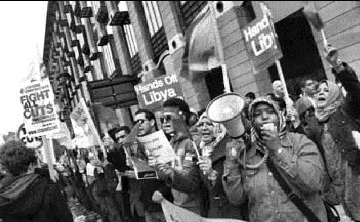 2011 London demonstration against government social service cuts also manages to include support for the soon to be overthrown Libyan dictator, Muammar Gaddafi.

The beloved Left movement, or what exists of a movement, is in constant search of a totem: a real, tangible example of anti-imperialist practice, of “actually existing socialism” or an ever-illusive alternative to capitalist hegemony. In its quest for a model, a raison d’etre, or a rallying cry, it finds itself siding with crypto-fascist demagogues and equally thuggish resistance movements. Large sections of today’s so-called progressives are blinded by the old assumption that my enemy’s enemy is my friend.

What were once the (nominally) cherished principles of the old Left have faded, only to be replaced by a single doctrine of anti-imperialism/anti-Zionism. Race and gender equality, radical democracy, individual liberty, egalitarianism and even class politics have been abandoned and subsumed by a unitary oppositional creed: All is now sacrificed in a distorted united front against US foreign policy.

Nowhere is this clearer than in the statist Left’s response to the on-going civil war in Syria. Some have found a new hero in President Bashar al-Assad and his Ba’athist regime. Others have weighed in on the side of The Rebels as if they were a united bloc representative of the Syrian people, rather than a hodgepodge of jihadist militants, military defectors and some (it appears increasingly few) well intentioned Syrians opposed to the authoritarianism of the Assad family.

The Left’s response to such crises is as confused as ever. They favor black and white pledges of solidarity; too often an empty word with no practical action attached over a nuanced response to complex problems. They’ll back anything or anyone superficially opposed to US interests.

There’s always been a tendency to romanticize armed revolutionaries and bearded guerrilla fighters, but the macho fantasizing reaches its nadir at anti-Israeli demonstrations when Britain’s Socialist Workers Party’ (SWP) activists chant, “We are all Hezbollah!”

The Party of God’s virulent anti-Semitism, misogyny, opposition to free speech, workers’ rights and personal freedoms is of no consequence, nor a religious fanaticism that puts the U.S. Republican right-wing to shame. What matters is their opposition to the Evil Empire. This is not to argue for the essential benevolence of American foreign policy, quite the opposite, but to question a simplistic mind-set that is typical of many radicals, who instinctively support anything that the US opposes.

Some of the nuttier sects on the Stalinist left even hold public meetings that shower praise on North Korea’s Kim Jong-Un’s, and still bemoan the fall of the workers’ gulag that was the USSR. Still more laud the Chinese Communist Party in their glorious road to socialism via sweatshops.

These socialist and communist sects are stuck in a realpolitik farce in which they’ll lend their ear (and, of course, their solidarity) to any despot who whispers anti-Americanism as a virtue.

They’ll forgo looking at the concrete policies or practices of an organization and send out their fraternal greetings to militant cabals and dictatorial strong-men, as long as they are considered to be working against the interests of American capitalism.

These militants want their world view represented in some officially-recognized geographical entity even if it’s horror states like Syria or North Korea.

They crave to find a place where their theoretical Utopias are practically realized so can point to the shining path of some crackpot dictator, print their faces on T-shirts and say, “This is the way, truth and the light”--a bulwark against the Great Satan of imperialism and monopoly capital.

It serves as a rallying point for desperate souls who see socialism in the flags of nation states and central committee communiques.

Perhaps the only benefit which comes from a group like the US Workers World Party’s adulation of the brutal N. Korean dictator, Kim Il Sung, as “an amazing revolutionary,” is that it gives a clear picture of what their rule would be like if they ever attained the power of the state.

Anarchists, on the other hand, eulogize real life examples of libertarian communism in 1936 Barcelona, the Paris Commune of 1871, Makhno’s Ukraine after 1917, and the workers’ uprisings of times past. However, unlike the authoritarian Left, we have never had our totemic symbol, our rallying cry, our USSR, our enemy’s enemy, our nation-state.

Instead, we have the lived experiences of millions throughout history that emphasize the power that people can wield through struggle. Mutual aid, cooperation, common ownership and control, not as represented by a spectacularized icon of lefty idolatry--a Castro, Mao, or kafiyeh-clad guerrilla, but revolutionary situations lived directly without mediation and without being recuperated by crooks draped in socialist red.

The left is on its back foot. They are still in retreat. Their defeats of recent decades have left some of them still yearning to see their aspirations epitomized in People’s Republics and mirrored in the speeches of their leaders.

But in their desperation, in their withdrawal from the class struggle towards a facile position of America-bashing they have finished by chasing chimeras as servants of morally bankrupt demagogues.