Insurrections of Imagination
A Speculative Review

The Italian insurrectionary and individualist anarchist, Renzo Novatore (the pen name of Abele Rizieri Ferrar, 1890–1922), died at the brink of a great confrontation with Fascism. His comrade Enzo Martucci claimed that at his death, Novatore “was preparing to strike at society and tear from it that which it denies the individual.” Unfortunately, he died in a gun battle with carabinieri in 1922 who had ambushed him. 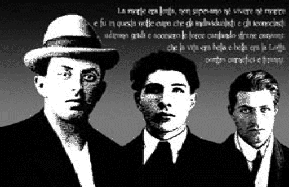 Renzo Novatrore, Italian individualist anarchist and anti-fascist militant with his comrades, Filipi and DiGiovanni, circa 1921.

Novatore was at a bar near Genoa with a friend when three military police arrived. He had gone underground and joined a gang of anarchist robbers led by Sante Pollastro. The anarchists attempted to leave, but a gun fight broke out and Renzo died in the exchange.

Within months Mussolini’s Fascist Blackshirts marched on Rome and seized the power of the Italian state.

I like to speculate on an alternative time line, to imagine what might have been if Renzo had not died that night. Instead, he and his comrades go on to attack power. They confronted the state and the Fascist movement. In the worst case scenario they would have been defeated, but the embryonic Fascist movement may have been weakened, and might not have come to power in Italy.

The 39 essays contained here are the translation of Wolfi Landstreicher, a long time writer of egoist and insurrectionary theory, and are apparently their first English language publication with the exception of a few short pamphlets. The translations in this collection are primarily from two Italian pamphlets originally published in 1924, following Novatore’s death, Over the Arch and Toward the Creative Nothing.

Novatore also wrote for a number of anarchist magazines and newspapers, which Landstreicher may have used for some of the translations.

In the best case scenario, Renzo and comrades may have achieved victory. The state would have been destabilized or even destroyed. The Fascists would have been crushed. There would be many different ramifications that could arise from this scenario.

There is a speculative aspect of Novatore. His writing seizes the imagination. He has long been best known for less than a page of text, the piece “Iconoclasts, Forward.” In it he wrote:

“History, materialism, monism, positivism, and the “isms” of this world are old and rusty swords, which are of no use to me and don’t concern me.

“My principle is life, my end is death. I want to live my life intensely so that I can embrace my death tragically.

“You are waiting for the revolution? Very well! My own began a long time ago! When you will be ready--God, what an endless wait! It won’t nauseate me to go along the road awhile with you!

“But when you stop, I shall continue on my mad and triumphant march toward the great and sublime conquest of Nothing!

“Every society that you build will have its fringes, and on the fringes of every society, heroic and restless vagabonds will wander, with their wild and virgin thoughts, only able to live by preparing ever new and terrible outbursts of rebellion! I shall be among them!”

This is actually only a small portion of a larger work, “My Iconoclastic Individualism.” “Iconoclasts, Forward,” was not unknown in English as it was reprinted in the Semiotext(e) USA anthology, and later in Bob Black and Adam Parfrey’s anthology, Rants and Incendiary Tracts, and then in Hakim Bey’s TAZ (Temporary Autonomous Zone).

Although this was the only text available in English by Novatore until recently, it resonated with many people. What makes Novatore so appealing that a short piece could survive through the years is his expansive imagination, which seems to be in the nature of “free spirits” (a term he uses too often to cite).

This expansiveness could not be confined. This is probably why Novatore valued struggle so greatly. During World War I, he deserted from his unit because he loved war too much to fight for any nation. Poetically, he states that Zarathustra told him “You must seek your own enemy, fight your own war, and for your own ideas!”

Where others might see struggle as something negative, Novatore saw it as positive.

“In struggle alone is our joy of living,” he wrote. Struggle was not merely a means, but also an end in itself. Struggle functioned as anti-entropy. The Revolution would never come in any sort of definitive or final sense, because “this war is inevitable and eternal...because when the Czar falls, Lenin rises.”

Because this war is eternal, defeat is inevitable, thus not to be feared. It is even to be valued:

There is no rest for my rebel spirit except in war, just as there is no greater happiness for my vagabond, negating mind than the uninhibited affirmation of my capacity for life and to rejoice. My every defeat serves me only as a symphonic prelude to a new victory.”

An aspect of nihilism underlies this love of struggle. To Novatore, nihilism was something that “fills my mind with divine upheavals and creates thunderous fanfares of war and polyphonic symphonies of a higher, strange, and unknown love which echo in my spirit.”

Through struggle, stronger people would arise, “that new human mind that on the rubble of the past will sing the birth of the liberated man: the free and great ‘I’.”

Novatore was an early enemy of Fascism. As he saw it, Fascism is weak, it is “impotent, because it is brute force. It is matter without spirit.” At the time, when Fascism was seen by some as a revolutionary force, Novatore saw that it was only revolutionary in the sense that it attempted to totally crush the free individual.

It could be said that it was an attempt to finalize the revolution of civilization in the enslavement of free humans. It was (and is) “a cruel, convulsive spasm of a decaying society that tragically drowns in the quagmire of its lies.”

Along with his hatred of Fascism came a disdain of leftism. “Fascism is the other face of socialism,” he wrote anticipating post-leftist anarchy. With socialism, Novatore wrote, “one is half free; one lives by half!” Socialism as a movement slays some tyrants but then demands the sacrifice of the individual “on the altar of the people and of humanity.”

Reading Novatore one must speculate and fill in the blank spots. At times he was vague and prone to rhetorical flourishes. That was often because most of his writing was done on the run, with both the forces of law and Fascism bearing down upon him. He simply did not have the time or opportunity to fully formulate theory. Nonetheless, he stood at a point which demonstrated the connection between egoism and anti-fascism, nihilism and anarchism.

He provided hints of currents to come such as primitivism, post-leftism, and insurrection. Reading his collected works it is possible to imagine that if he’d been able to stay with his loving family and beloved books, he might have created a philosophical articulation of his world view and systematically outlined his theories.

But time and time again he found himself in confrontation. He had to go on the run to dodge the draft. Towards the end of his life, Fascists attacked him in the home he shared with his wife and sons (he fought them off with hand grenades). And, he could never withstand the temptation to join in an insurrection prevalent in the pre-Fascist period in Italy. Though he never created a systematic theory, he nonetheless put his ideas into action. He was able to write the poetry of insurrection and struggle, and even more so lived his poetry.

Reading his writing today, one is impressed by the vitality of his poetry and prose. Knowing his biography enhances this and demonstrates how his words related to a lived experience. His writing liberates the imagination, like an Allen Ginsberg with dynamite. This is probably why a short excerpt, like “Iconoclasts Forward,” was able to continue to resurface again and again. Rarely does writing have such power to vitalize one’s own life. It would be a lofty goal to try to live up to in our own writings.