Leave Your Hat On!
Stylish protection against surveillance 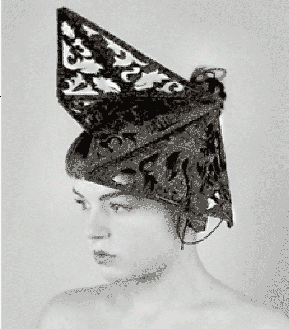 Someday, it’s possible that surveillance technology may become sophisticated enough to read your mind as you’re walking down the street. If that dystopian future comes to pass, you’ll probably want one of these stylish thought-blocking accessories: When they detect scanning technology in action, they’ll distract you with a zap or a flashing light.

Designers Lisa Kori Chung and Caitlin Morris, both researchers at Fabrica in Italy, started work on the project as they were thinking about clothing and privacy--both how clothing protects and conceals, and the increasing difficulty of maintaining private thoughts in an era when national security agencies and marketers want to get inside our heads.

“We imagined what it would be like for these things to converge, if clothing played a role in intellectual and emotional privacy as well as the physical privacy it’s always been associated with,” say Chung and Morris.

They researched current surveillance techniques, including facial recognition software that can detect suspicious activity, and brain scanning technology that’s beginning to accurately recognize emotions and thoughts, and thought about how they might be deployed together in an urban setting.

“Aside from the realistic constraints of long-distance scanning, the premise of detecting people’s general thoughts and moods based on a low-resolution brain scan is a possibility that’s already proving very realistic,” they say. “We looked into recent studies where researchers were able to detect precise emotions in subjects, and that data is already being used for information on brand recognition and advertising.”

As they imagined how the technology would continue to evolve, the designers created three accessories. Instead of simply blocking a scanner from reading thoughts, the designs work by distracting someone from whatever they wanted to keep private. A hat transmits sound through bone conduction, a collar sends a tiny electric shock, and a mask flashes bright lights.

Both designers say they hope the designs don’t become necessary to use. “This particular sort of surveillance was absolutely designed as a future fiction, and we hope it stays that way as long as possible.”