“Puppet theater...[is] an anarchic art, subversive and untamable by nature, an art which is easier researched in police records than in theater chronicles.”

For the last 25 years, giant puppets have been a nearly constant part of my life; making them, carrying them, creating theater and parades with them, blockading streets and occupying cities with them, making them all over the US and Canada, plus in Bolivia, Argentina, Hong Kong, Israel, Japan, and sometimes being arrested or having art spaces raided by authorities trying to stop them.

Using art and culture has been at the center of my effort of how to be most effective and strategic at making positive radical social change in my community and the world.

My puppet making started when I was organizing against nuclear weapons at the Nevada nuclear weapons test site and at Livermore National Laboratory nuclear weapons labs in the San Francisco Bay Area. At a workshop preparing for a 1989 Hiroshima Day demonstration at Livermore, I made my first giant puppet, a toxic waste monster with a nuclear bomb in one hand and a toxic barrel in the other.

The puppets made a grand appearance at the demonstration. It was a significant departure from past actions.

There seemed power in putting art and theater at the center of our organizing and bringing these giant surreal sculptures to life.

Some of it is more easily explainable. Puppets are big, spectacular, and help hold space, amplify our messages and assert our presence in the streets. They are attention-getting and make for good photos and media, with thoughtful imagery and signage, and can communicate strong clear messages. They are also festive and fun and give spirit to a public gathering or rebellion.

But some of their power is harder to explain. Giant puppets can be unfamiliar and surreal, putting police and authorities on unfamiliar terrain. While puppets cheer and bolster participants, they can also help shift our actions into less predictable giant public spectacles and festivals which are more inspiring and dream-like.

In 1996, a network of Midwest anarchist groups organized Active Resistance, a North American anarchist gathering in Chicago which coincided with the Democratic Party’s national nominating convention. It was a key moment in the growing anarchist subculture and activism in the US, at which giant puppets escalated the scale of our presence at street actions.

As I wrote for the Fifth Estate in an issue following the events:

“The organizers invited us puppeteers/street theater/muralist/dancers from San Francisco and a mask-maker from Chicago to set up an ongoing, week-long mask, puppet and prop building workshop. Over one hundred people participated in making giant puppets, constructing papier mache and cardboard masks and props, and building and decorating a 20-foot-high Corporate Power tower. When completed, we took our creations and theater into the streets.

“Puppet police in giant pig heads with their cardboard barricades ordered people to move and mingled with the real cops. Puppet media (See-BS TV) interviewed spectators with a cardboard camera and mic as a TV puppet showed a moving scroll of collaged images.

“At the height of the procession, people chanting, ‘Rise up,’ rebelled against corporate power and the four walls of the top half of the Corporate Power tower collapsed, unveiling a giant red fist and murals on the backside of each wall illustrating positive future visions. Two giant colorful warrior/ goddess liberation puppets flew out and circled the crowd.”

On the day these images paraded through the streets of Chicago, the fascinated and smiling reactions of people, and the participation and enthusiasm of participants, demonstrated that it was wildly different than a typical protest. 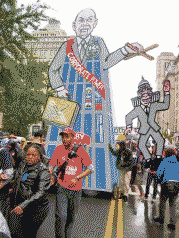 One of many puppets for the ten year anniversary of the Cochabamba, Bolivia Water War. In 2000, a popular uprising forced out corporate water privatizer Bechtel Corporation.

The following year, a series of Art and Revolution Convergences were organized across the country with the goal of infusing art, theater, and puppetry into mass movements by training artists and performers not only to use culture creatively, but also to facilitate meetings and carry out direct actions.

The training sessions led to a spread of street theater collectives across the West Coast and beyond, many calling themselves “Art and Revolution.” Puppetry and street theater began to spread among different movements from anti-sweat shop campaigns in the cities to farm workers fights in the fields to Earth First! campaigns in the woods.

In early 1999, the World Trade Organization (WTO) announced it would hold a ministerial meeting of government and corporate leaders in Seattle later that year. Our Art and Revolution Collective in the Bay Area thought it was ripe for large scale street theater, puppetry and direct action. After discussion with other Art and Revolution street theater/ organizing collectives and radical groups on the West Coast, the Direct Action Network Against Corporate Globalization was formed which issued a call for a “Festival of Resistance,” and to “Shut down the WTO.”

We organized a ten-day convergence in the lead up to the WTO in the western US and British Columbia, offering mass art and puppet-making and direct action training. Also, we presented an educational road show using puppetry and street theater to explain the dangers to the environment and people that the WTO represented. If we hadn’t put arts organizing at the heart of our mobilization, we would not have shut down the WTO in Seattle and the ministerial talks may not have collapsed.

There is no guarantee that this ancient global art of performing with objects will break across boundaries, reach people’s hearts and guts, and shift consciousness and/or make change. Puppetry and arts can also become a self-marginalizing and sub-cultural activity, which is fine as a ritual or celebration among our subculture, but does not help us engage with the broader community and society to win changes.

Additionally, part of the power of our puppetry and street theater was its lack of predictability, so if our art or actions become too predictable, we can become more easily contained. In the years after the Seattle WTO shutdown, radical puppetry spread like wildfire. Massive pageants now often accompany mass mobilizations across the world with puppets and objects and innovation.

David Solnit works as a carpenter in the San Francisco Bay Area, organizes to make big art with lots of people for big changes, is a puppeteer, and is the editor of Globalize Liberation: How to Uproot the System and Build a Better World.