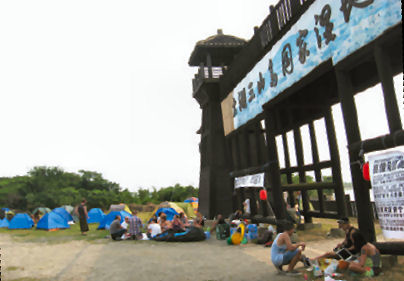 The first Burning Man festival in China, with several hundred in attendance

Burning Man began with a wooden effigy and a single match on a beach in San Francisco in the late 1980s. When the police came and closed down the beach burning of the Man it was John Law and Michael Michael, two members of the Cacophony Society, a group of legendary urban pranksters, who told local artist Larry Harvey of a place they knew of in the desert “where you could burn things.”

Today the annual art, music performance festival, which promotes radical self-expression, decommodification, self-reliance, and leave-no-trace, attracts nearly 70,000 participants to an other-worldly desert in northwestern Nevada. While Burning Man has distinct anarchist roots, some critics state plainly that the event lost its soul when it began charging for entrance tickets.

Despite this and even with its permanent bureaucracy, its layers of rules and regulations, and the foul presence of patrolling uniformed and plainclothes federal, state, and local law enforcement on the Playa, the festival remains a free space for marvelous self-made culture and art, a clothing optional temporary autonomous zone, with an environment unlike anything else on this planet. It describes itself as Black Rock City, a fully functional municipality. 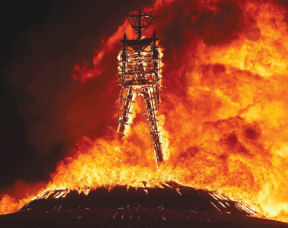 Burning the Man in the Nevada desert, with 70,000 in attendance

It is a place that many libertarians still call home for one week every year in late August. It has spun off scores of regional satellite events worldwide, all loosely based on the 10 Principles of Burning Man. Written in 2004 as operational guidance, they include, Radical Inclusion, Gifting, Radical Self-reliance, Radical Self-expression, and Communal Effort. All of them are available on the organization’s web site at buringman.com.

This year in June, the first ever regional burn in the People’s Republic of China was held on an island in Lake Tai, Suzhou, a scenic spot in the southern part of the Yangtze River delta.

I was there at the beginning, at Baker Beach, quite by accident, and attached an expired drivers license to the Man and watched it go up in smoke. After relocating to Asia and missing the first Cacophony-led burn in the desert, I returned in 1996 and joined the Ranger crew setting up what would turn out to be the last lawless Burning Man.

That year, one could still carry a bolt action rifle on the Playa, pedal off into the desert wasteland like a lost CNT militiaman, and go scare the jackrabbits with ill aimed shots. At another Burn in 2001, despite the high ticket price, the rules, and the cops, the original vibe and spirit was still beating strong under the hard surface of the dried desert lake bed. After a spectacular Burn of both the Man and the Temple, I was back in San Francisco where my flight to Asia was scheduled for September 10, 2001.

Fast forward to 2008. From my home in China, I remained in touch with friends who attend Burning Man. However, I noticed that on the BM webpage, the page showing worldwide volunteer regional contacts, the map for China was blank. I reported for duty and Burning Man China was born. It wasn’t long before a small nucleus of Burners in Shanghai was assembled, notably two veteran theme camp organizers Wishboy and MCJ. Earlier, Burner activists LadyC and Old Scholar in Beijing had organized BM and ecological events there, and had added Chinese subtitles to a 2004 Burning Man documentary, “Beyond Black Rock.”

Together our group proposed three goals: One, to promote the Burning Man Festival in China and encourage Mainland Chinese individuals and artists to make the journey to the Black Rock City Burn in Nevada. Two, to publicize the 10 Principles of Burning Man, which we did after a much-discussed and re-corrected Mandarin translation. And, Three, to someday find a site, get permission for, and actually hold a regional satellite Burn event in China.

Number Three was at my urging, but the immediate response was, “Oh the Chinese government will never let you hold a Burning Man event.” However, the image of an all controlling state and party monitoring every aspect of life here is not the reality. The state has retreated from many areas (like the bedroom, as China’s growing and more open LBGT population can attest to), and alternative foreign and local music acts play at musical festivals that resemble ones in Glastonbury in Britain or Coachella in California.

Burning Man’s popular image of drug-soaked nudity, while not completely inaccurate, was another hurdle. As we wanted to reach out to local Chinese, we hoped to downplay this at any event we promoted here and mention Principle Seven, Civic Responsibility, which recommends compliance with local, state, and federal laws.

My view that one can do anything in China once, under the radar, and if you didn’t break any laws and the locals didn’t complain, you might get official permission to do it again, was criticized as irresponsible, but I doggedly held to it. Sites appeared and we went to inspect them and inquire with the local authorities. One, on fallow farmland, was slotted for a three day event we named Dragon Burn, but it had to be abandoned when we discovered that squatting peasants had gotten tired of waiting and had planted crops instead!

Then, late in 2013, we received a bizarre email from an investment bank in Beijing claiming to represent a township in Ordos Region of Inner Mongolia whose mayor wanted to invite the entire Nevada Burning Man “to relocate to the Gobi Desert for one year.” Skeptical but curious we met them in their corporate boardroom where the glad-handed mayor told us he wanted to build “a new Dubai in Inner Mongolia.”

Ordos region, rich in mineral wealth, was trying to improve its image as it had built the world’s largest ghost town, a gleaming, empty provincial capital that residents had refused to move to. We politely explained that moving the Burn was impossible and that under our principles no corporate advertising or vending would be permitted on site for a much smaller, regional Burn. The bank CEO was completely clueless and asked for the names of the celebrities who had gone to Burning Man.

The town official invited us to an all-expense paid junket to the site in the spring “after the snow has thawed.” A few weeks later, after the boss and town officials had taken a closer look at Burning Man’s 10 Principles, the offer was quietly withdrawn.

Finally, a fourth site, on a small island in a lake in the Suzhou region, 2.5 hours from Shanghai was located. We discovered a beautiful location lakeside, on a movie set built for a dynasty kung-fu film, below a stunning white rock cliff side that reminded me of a Taoist landscape painting. Even the crust of the ground had dried and cracked after a rainstorm, resembling that of the Playa in Nevada.

An agreement was made with “The Captain” of the island and we began preparation. In addition to the practicalities of electricity, porta-loos, and security, the showcase art piece, the Dragon’s Egg, an effigy made of pre-cut plywood and nearly four meters high, was already in production back in Shanghai. Reassembled on the island, it would be set ablaze on the last night of our event.

We decided not to use standard publicity for Dragon Burn, instead opting for word of mouth and social network apps. A capacity ceiling of 300 participants was set and quickly met. It was agreed that an event that attracted only foreigners in China would be both useless and ridiculous but by now our outreach had brought in several bilingual Chinese who had heard about BM and two joined our planning team.

Altogether, nearly fifty Chinese would attend, some coming from as far away as Hong Kong, Shenzhen, Dali, Beijing, and Taiwan. In camp conversations, I would start a discussion on non-state collective activity and ask if they knew what anarchism was and what it stood for.

Our man in Taiwan, Old Scholar, would bring an incredible account of the Sunflower Revolution in Taipei, completely under reported in the West, of the takeover of the Legislature Building by anti-trade treaty activists, which he joined, camping out for several days inside the chambers!

The day arrived, June 6 (D-Day!), and everything went according to plan. The busses arrived, the ferries shuttled across the lake, and the gates opened at the site. Our greeter team did their best to welcome the participants, inform them this event was completely different, that they were personally responsible for their food, water, trash and that they must leave no trace.

They were given a tiny gong to ring and were presented with a small blank votive offering, a piece of wood on which to inscribe a message and throw into the fire on the burn night. Our Ranger teams patrolled and did their best to keep the non-participating Chinese island tourists from entering the event. The music blared non-stop and miraculously bounced off the cliff side and out into the lake, leaving the nearby villages on the other side of the hill undisturbed.

Projections and lasers turned the cliff into a giant screen. People got quietly high but everyone kept their kit on. Art and performance astounded us all, including a Shadow box Theatre show by the Fire Nomads from Dali and a group face painting called Assimilation Game using texts from Kipling’s, “White Man’s Burden.”

At 10 pm on Saturday June 7, the Dragon Egg effigy was burned. The liberation of heat and energy hit the crowd in waves and people threw their votives into the flames. Then, everyone ran and danced around the fire, lingering later by the red hot embers as the festivities continued. Two local Chinese from the island who were onsite to mind the portaloos watched in rapt wonder and they must have told the rest of the villagers. The next day, every square inch of the site was cleaned up and the leave-no-trace vow was met. Only the black and grey ashes of the Dragon’s Egg remained.

We did it. We had succeeded in creating and maintaining for 60 hours a small living and breathing temporary autonomous zone, a little “People’s Commune,” without any authority except ours, on the shores of ancient Lake Tai. Everyone agreed they had never seen anything like this in China before.

Burning Man is not a revolution, nor is it a party, but it has the possibility to begin a movement for soft change in China. Our goal is to do it again without becoming a burr in the fur of the Great Panda. China today lies within the realm of the possible and the future could hold many alternatives.