Cazzarola!
[don’t say it in polite Italian company!] traces generations of resistance to fascism and bourgeois society in Italy

Italian and Spanish anarchism have long inspired anti-authoritarian movements in the Americas.

Anarchists fleeing fascist governments in Mussolini’s Italy and Franco’s Spain during the 1920s and 30s sped up a process already underway through normal emigration to not just Spanish speaking countries in the West, but to Canada and the United States as well. 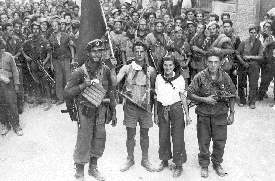 Emma Goldman and other activists influenced the ideas and conditions of these anarchists, especially as part of international solidarity programs for those facing repression from totalitarian regimes.

Today, North American English-speaking anarchists have access to many classic texts dealing with the movement in Spain, especially those dealing with the Spanish Revolution of the late 1930s, but literature on the Italian movement of that era is harder to find.

In many ways, anarchism formed contiguous movements in these two southern European regions, separated by not much more than language and a few cultural details. Both were strongly rooted in trade unions but also had a significant presence among peasants and intellectuals. Despite differing chronologies--the ebbing and flowing of the movements’ strengths are out of synch historically--the highs and the lows have been remarkably similar.

Italian anarchism had more room to manoeuvre in the chaos and discontent immediately following World War I, but the Italian ruling class learned how to build fascism as a successful repressive force earlier than their cohorts in Spain.

On the other hand, the Italian variety failed sooner than the Spanish regime, and that gave anarchism a chance to recover there shortly after World War II. Such space didn’t open up in Spain until the mid-seventies following the death of Franco.

Yet even with the ability to organize above ground in the 1950s, Italian anarchism stagnated, then splintered, showing little vitality. Only in the late sixties and early seventies, as a new wave of radicalism ran up against the limits of a Marxism still dominated by the old Left, did anti-authoritarian concepts and history begin to reassert themselves on the streets and in the workplaces, re-invigorated with the desire not just for a new politics, but for a new way of living.

Early on, the new anarchists discovered that even the atheism of their political predecessors hadn’t freed up the social spaces and values long controlled by the Catholic Church. As in many other places, a patriarchal ethos still dominated political organizations, and traditional anarchist habits still had as much difficulty with gender issues as did capitalist society.

We have no shortage of general theoretical books attempting to talk us out of these dilemmas, and much biography and inspired documentary media. But the gut-level tensions and exasperations of living under modern capitalism lend themselves much more readily to narrative fiction.

A documentary can easily get bogged down in telling the compulsory “how and why,” but good fiction shows you the experience and puts you to work evaluating it in terms of your own life.

Norman Nawrocki’s novel, Cazzarola!, explores the microcosm of the Italian experience through a few generations of Italian militants from the late 1800s to recent events. It doesn’t chronicle the lives of these families as much as bring some of the episodes of their struggles to life in an almost stream-of-consciousness remembering--not as irrationality, but as the vivid and confusing, breathtaking and brutal confrontations with bourgeois society that circle round and round throughout this history.

The book’s title is a kind of expletive that often punctuates the speech of people caught up in such confrontations.

Nawrocki clearly wants to connect the experiences of family members from different historical periods, even though each has expressed their goals differently. State repression has fundamentally the same roots and remarkably similar methods throughout this history, but the experience of people fighting it comes out of different visions of the free society they are trying to achieve.

The state hardly changes in character throughout these years. It wears different clothes, but its rigid character armour underneath is instantly recognizable in the way it treats each generation of the Discordias, the family Nawracki chronicles through the years.

The most striking differences across the generations and the real flesh of Cazzarola! have to do with contradictions of gender and ethnicity. The modern-day story centres on the movement of immigrants into Italy, in particular the Roma who, persecuted more openly in their eastern European homelands, respond in the way such minorities and conquered people have for thousands of years: they quite rationally move to places appearing to provide a more secure means of survival.

Their Otherness within Europe, however, reduces the Roma to lumpenproletariat status for Italy’s worn-out industrialism, and fodder for the hate strategies of neo-fascist gangs and politicians.

A new generation of political activists, now motivated by broader social justice concerns, in defending the Roma, find themselves up against a modern thuggery recognizable through their grandparents’ memories.

Interwoven within this story, and in some ways more prominent on the surface of it, is the condition of women. On one hand, the novel presents at its centre a tragedy within a tragedy, the constant threat of violence to a young Roma woman who, despite her remarkable strength and agility, hangs on precariously in a makeshift Italian refugee camp with her widowed mother and two younger siblings.

On the other, we read about the ambiguous role of women throughout this century-long period of Italian anarchism. Typically for that era, men dominate the words and actions of the class struggle, which mostly takes place in the public sphere--in factories, in organizational meetings, in militant activities.

But in significant scenes, Nawrocki shows how women insist on being part of the struggle; that men take the domestic sphere into consideration in strategies of resistance. As well, women attacked truckloads of fascists with boiling water and other bombardments from the upper stories of their tenement buildings.

Women’s activities on the surface appeared to be merely support for their male relatives, but in fact added depth to the struggle within society and turned such tactics as factory occupations into a social crisis, not just an economic one.

However, the novel’s sketching of historical continuity through the genealogical thread of the Discordia family episodes raises the question of anarchism as a tradition. Is an anarchism handed down from parent to child qualitatively different? What distinguishes it from other inherited practices such as religion? Or, is anarchism such a good idea that it should be readily embraced no matter where it is found--the university, the factory, the family, or the street?

The novel touches on all these forms of transmission, but pays particular homage to the family. Anarchists frequently argue that the family is a reactionary structure, always forcing on children the authoritarianism and patriarchy of the parents.

But the family structure traced in Cazzarola! bears no resemblance to the traditional nuclear family. It is emphatically an extended family with individual beliefs and strategies developing through a power structure that is more horizontal than vertical.

It puts the diverse personalities of siblings and cousins on flatter ground where love and loyalties make this a collective process. Nawrocki’s interweaving of these characters’ questionings and challenges presents a microcosm of the fundamental idea of an anarchism that nourishes the dialectic of individual liberty within a community.

The book is not without problems, however. Keeping track of the various characters, many of whom have similar names, is often difficult even with a list at the beginning of the book (which would be more effective as a chart). While subheadings help in signalling the shift in time-periods, they are confusing as markers of narrative voice changes.

Nonetheless, the book’s multiple storylines keep you going and its dramatic tension builds immediately. An early scene clearly gives us a sense of the future--we suspect, correctly, that it is taking place after the main events in the book, but it is suffused with such tragedy that I carried with me a feeling of foreboding and anxiety through each new scene depicting the main protagonists.

This is hardly a flaw; a novel like this warns against complacency even in the glow of an anarchist history that really does move forward and a love story about which you want all obstacles overcome.

Given this, and given what we’ve learned from generations of liberators about fighting an oppressive society, we would be foolish to assume that the system we face treats us any less cruelly.

Steve Izma worked at Dumont Press Graphix, a worker-owned and controlled typesetting shop in the seventies and eighties, and continues to work in publishing. He lives in Kitchener, Ontario.