Tales From the Cybersphere
Fifth Estate on the Web: A guide to the Web presence of Fifth Estate staff, writers, and friends

Longtime Fifth Estate friend and supporter Julie Herrada has contributed many articles and photos to the magazine over the last 15 years. These can be found by searching the growing archives on our site at FifthEstate.org. Use the Search box or the FE Authors drop-down list on our home page to find what we currently have online. 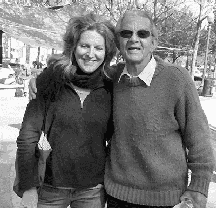 As curator of the University of Michigan’s Labadie Collection of labor and radical history materials, Julie collects and manages holdings related to international social protest movements.

She also curates exhibits and assists students and researchers from all over the world, and is constantly collaborating and thinking of ways to preserve and provide universal access to hidden histories.

She thus plays an important role in preserving our movement’s past, helping to ensure that the record of its triumphs and challenges isn’t lost to current and future rebels.

From the Collection’s main page at lib.umich.edu/labadie-collection you can access materials and view online exhibits.

For a CSPAN video documentary about the collection, with narration by Julie, visit c-span.org/video/?3161211%2FALabad

One notable example of Julie’s activities has been facilitating a Labadie Collection project to digitize newsletters documenting grassroots activism in the civil rights movement in the 1960s.

According to one participant/commentator, “Several of us, who were members of SNCC [Student Nonviolent Coordinating Committee] in the early 1960s, have been saddened in recent years by the increasing obsession with describing the movement(s) of those days in terms of ‘leaders’ and even a cult of ‘leadership.’ Our distinct memories are that most of the real work of the movement was done by rank-and-file activists, and with great difficulties. The ‘leaders’ kept running as fast as they could to get to the front of the parade.”

Julie has commented that “this newsletter is of interest to anyone researching primary sources of on-the-ground activism during the civil rights era.” To access the digitized newsletter, visit the Hathi Trust Digital Library site at catalog.hathitrust.org/Record/002650714

In her role as radical memory-keeper, in 2005 Julie curated, “Soapboxers and Saboteurs: 100 Years of Wobbly Solidarity,” an exhibit of materials from the Labadie Collection. For a description and review, visit news.infoshop.org/article. php?story=20050829104346320

The same year she also made a notable contribution to the FE’s Fall issue (#370), including editing articles and graphics commemorating the I.W.W.‘s first century. These will also appear soon in our online archives.

Julie has also had articles published in several professional library journals, including some that can be found online. For example see, the Progressive Librarian (spunk.org/agnes.html); and her activities in reaching out beyond anarchist and other radical circles have been covered in The Library Journal (see for example, http://lj.libraryjournal.com/2002/03/people/movers-shakers-2002/julie-herradamovers-shakers-2002/).