Anarcho-shorts
& other Tales of the Planet

A valuable anarchist history resource, The Emma Goldman Papers archive, is being defunded by University of California, Berkeley, and will have to close if alternative funding can’t be found soon. The 34-year-old archive is currently the most comprehensive, organized collection of Goldman-related materials in the world.

The EGP project has published selected documents in several books. It has been planning to digitize the approximately 40,000 items it holds, making them available to interested researchers worldwide. However, in October, the university administration informed the project’s editor and director, Candace Falk, that it would no longer support the project. Other sources of funding have also been dwindling. 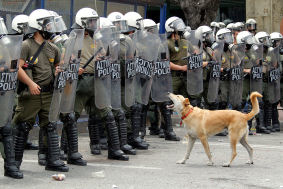 Loukanikos, the dog who faced down Greek police during the height of the eurozone crisis, passed away peacefully in autumn 2014, having retired from protests in 2012.

October brought the sad news from Greece that Loukanikos, the riot dog who faced down Greek police during the height of the eurozone crisis, had died. According to London’s Guardian newspaper, Greek media reported that Loukanikos (Greek for sausage) passed away peacefully, having retired from protests in 2012.

According to Avgi journalist, Petros Katsakos, the dog’s health was adversely affected by tear gas and from being kicked by police, forcing him to leave active protests.

He swapped tear gas and riot shields for a gentler life with an Athens family, who offered “all the care, love, food and vaccinations” a dog could need.

A tuneful tribute to Loukanikos can be seen in singer/songwriter David Rovics’ animated video at youtube.com/ watch’v=bR_97V59LbE.

A successful Kickstarter campaign to raise funds for a documentary on the life of radical psychologist Wilhelm Reich (1897–1957) has allowed production to begin on the film.

Not an anarchist, but Austrian-born Reich’s analysis of authoritarian personalities is key to understanding the mass psychology of submission to authority of any ideology.

His books were so threatening to the medical and political establishments that they were banned and burned by the U.S. government in 1956 and 1960. Reich died in a Federal penitentiary in 1957 following his refusal to stop circulating his works.

The Kickstarter video is a good preview of what to expect from the film. Google “Wilhelm Reich Film Project” for it.

The latest writing in our mag on Reich is the 2010, “A Radicalization of Reich: Sexual Repression & The Roots of Authoritarianism,” by Patrick Dunn at fifthestate. org/archive/383 summer-2010/ radicalization-reich.

Take this Putin! The Moscow publishing cooperative, Radical Theory & Practice is translating Emma Goldman’s autobiography, Living My Life, into Russian. The 993 page memoir of a woman whose life intersected with the great events of her era, was published in two volumes in English in 1931 and 1934.

It’s a wonderful account of a fully lived life (1869–1940) of someone who fought tirelessly for anarchism, women’s rights, sexual freedom, and civil liberties in an era where such struggles could land you in prison (and, did with her).

The publishers expect to find an audience not only in Russia, but also in other countries with Russian readers such as Belarus, Ukraine, Moldova, Armenia, and Georgia.

Financing is critical for the completion of this project. If you can help, contact our Russian comrades at rtp@riseup.net.

Sometimes it’s worth voting. In the Summer of 2011, artist Steve Lambert began a national tour of “Capitalism Works For Me! True/False”--a 9 x 20 ft sign asking people to vote on the system that is supposedly to be above challenge. He’s been taking the sign around the country, including a stint in New York City’s Times Square.

Lambert’s site at visitsteve.com/ doesn’t provide results, but he emailed us saying, “I don’t have a current total. Honestly, after a few months I lost interest in the numbers.”

“The vote and total works,” he wrote, “like a trap to draw people in. The numbers don’t actually represent what they think, the part they feel compelled to speak about when given only a true/ false choice. Capitalism did well in Iowa, but lost in Times Square, but often is too close to be especially meaningful.”

Ah, the fantasies famous people engender. The photo above [in the print edition] is of Mexican painter, Frida Kahlo (1907 1954), known for her self-portraits, Surrealism, magic realism, and her tempestuous marriage to muralist, Diego Rivera, and Vladimir Mayakovsky (1893–1930) Russian poet, playwright, and exponent of early-20th century Russian Futurism. It is probably almost swoon-inducing to some.

Unfortunately, the story here is that the photo, which is makingthe rounds on the internet, is a complete fake. In fact, a double fake since the two never met and instead were first Photoshopped together by an on-line photographer, who then placed Frida’s head on another body.

Technology has eliminated the 20th century adage that, “one picture is worth a thousand words.”

Back issues of the FE are available from LittleBlackCart.com. For bulk distro, contact us at fe@fifthestate.org.