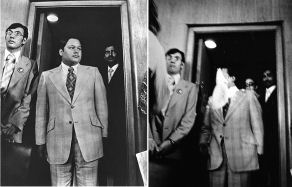 For fifty years, the Fifth Estate has reflected on the world’s most contentious social issues including critiques of religion and its appeal to those in need of justifications for their oppressive goals.

Those who question or show disrespect for the basis of their quest for domination suffer threats, ones which are often acted upon.

The toll of attacks on the creators of anti-religious ideas and images, including, but hardly limited to Charlie Hebdo in France, is reminiscent of a near-fatal episode from this publication’s past.

In August 1973, a 15-year-old Indian youth, Guru Maharaj Ji, fashioning himself as The Lord of the Universe and other self-inspired superlatives, visited Detroit to promote an upcoming event in which he was to participate.

Thanks to some string-pulling by local followers, he was to receive a key to the city. At the City Hall ceremony, the Perfect Master was cream-pied square in the face by Pat Halley, a 23-year-old Fifth Estate staffer. 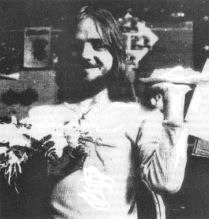 After heaving the pie, Halley quickly escaped, helped by some strategic blocks to his pursuers from several friends. News of the incident spread first through the local media and then worldwide.

Pat explained his motives at the time, “The guru is just a slick businessman. I always wanted to throw a pie in God’s face. God represents the ultimate in authority and I represent the ultimate in disrespect for authority.”

The young Lord seemed to take the shaving cream pastry pasting in stride, telling reporters, “I just want to apologize to that person who did that to me. I don’t want him arrested or hurt. If someone doesn’t understand something, he cannot be held responsible for what he does.”

But some of the Great One’s followers apparently didn’t agree. A week after the incident, two of the guru’s devotees, claiming to be disillusioned apostates from his divine teaching, gained Halley’s confidence by offering to reveal secrets of their sect that could lead to a news scoop for the Fifth Estate.

Cornering Pat in his home, they attacked with blackjacks in an assassination attempt. Interrupted by Pat’s screams for help and the intervention of neighbors, the cult members fled the scene. Halley survived with 55 stitches and a plastic plate implanted in his skull.

We savor moments of total disrespect for authority; we cheer and honor those individuals and groups who pull them off. But we know from experience that the vicious defenders of the Great Ones and their ideas often stand ready for revenge and punishment.

Sometimes authority bears down on us in a diffuse way, as in the daily alienation and humiliation of work. Sometimes it is more direct and personal, as our brave comrade experienced it. In either case, disrespect is appropriate, vigilance required.

Pat Halley’s disrespect for authority, and his contributions to this publication, extended for decades beyond the pie incident.

After Pat’s 2008 death, at the age of 57, the FE’s David Watson eulogized Pat’s life: “He came from a place and context that is not supposed to produce artists or visionaries--a rough and tumble, working-class Detroit background.

“He wrote for the Fifth Estate, published books of poetry, and worked in several theater troupes, organizing a rough, spontaneous, proletarian theater of cruelty in the Primitive Lust Theater and the Freezer Theater, in the vernacular and spirit of down-and-dirty Detroit.”

David’s eulogy and articles about Pat are in our web site archives using Search. More at CassCorridorTribe.com.