The Hierarchy of Command

This is an excerpt of Murray Bookchin’s 1969 pamphlet Listen, Marxist! A longer version appeared in the May 1976 Fifth Estate, which is available in our archives at FifthEstate.org.

“[The essay that follows] is not a series of hypothetical inferences; it is a composite sketch of all the mass Marxian parties of the past century--the Social Democrats, the communists, and the Trotskyists.

“To claim that these parties ceased to take their Marxian principles seriously merely conceals another question: why did this happen in the first place? The fact is that these parties were co-opted into bourgeois society because they were structured along bourgeois lines. The germ of treachery existed in them from birth.”

Social revolutions are not made by parties, groups, or cadres. They occur as a result of deep-seated historic forces and contradictions that activate large sections of the population. 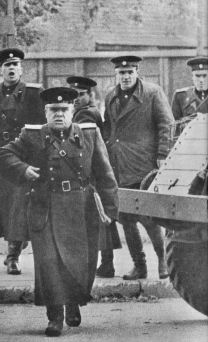 Scene from the 1956 Hungarian revolution: Russian tank commanders, the heirs of Lenin and the Bolshevik Party. (Photo from Hungary ’56 by Andy Anderson)

The most striking feature of the past revolutions is that they began spontaneously. Whether one chooses to examine the opening phases of the French Revolution of 1789, the revolutions of 1848, the 1871 Paris Commune, the 1905 revolution in Russia, the overthrow of the Tsar in 1917, the Hungarian Revolution of 1956, the French general strike of 1968, the opening stages are generally the same: a period of ferment that explodes spontaneously into a mass upsurge.

The Glorious Party, when there is one, almost invariably lags behind the events. In February 1917, the Petrograd organization of the Bolsheviks opposed the calling of strikes precisely on the eve of the revolution which was destined to overthrow the Tsar. The workers ignored the Bolshevik directives and went on strike anyway.

In the events which followed, no one was more surprised by the revolution than the revolutionary parties, including the Bolsheviks.

The Hierarchy of Command

As the party expands, the distance between the leadership and the ranks invariably increases. Its leaders not only become personages, but they lose contact with the living situation below. The local groups, which know their own immediate situation better than any remote leader, are obliged to subordinate their insights to directives from above.

The leadership, lacking any direct knowledge of local problems, responds sluggishly and prudently. Although it stakes out a claim to the larger view, to greater theoretical competence, the competence of the leadership tends to diminish the higher one ascends the hierarchy of command.

The more one approaches the level where the real decisions are made, the more conservative is the nature of the decision-making process, the more bureaucratic and extraneous are the factors which come into play, the more considerations of prestige and retrenchment supplant creativity, imagination, and a disinterested dedication to revolutionary goals.

The result is that the party becomes less efficient from a revolutionary point of view the more it seeks efficiency in hierarchy, cadres, and centralization. Although everyone marches in step, the orders are usually wrong, especially when events begin to move rapidly and take unexpected turns as they do in all revolutions. 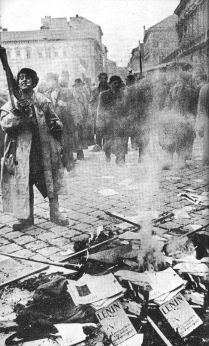 Scenes from the 1956 Hungarian revolution: the revolutionary proletariat destroying mystification. (Photo from Hungary ’56 by Andy Anderson)

The party is efficient in only one respect: in molding society in its own hierarchical image if the revolution is successful. It creates bureaucracy, centralization, and the State. It fosters the very social conditions which justify this kind of society. Hence, instead of [the Marxist concept of the] withering away, the State controlled by the Glorious Party preserves the very conditions which necessitate the existence of a State and a party to guard it.

On the other hand, this kind of party is extremely vulnerable in periods of repression. The bourgeoisie has only to grab its leadership to virtually destroy the entire movement. With its leaders in prison or in hiding, the party becomes paralyzed; the obedient membership has no one to obey and tends to flounder. Demoralization sets in rapidly. The party decomposes not only because of its repressive atmosphere but also because of its poverty of inner resources.

It cannot be stressed too strongly that the Bolsheviks tended to centralize their party to the degree that they became isolated from the working class. This relationship has rarely been investigated in latter-day Leninist circles, although Lenin was honest enough to admit it. The Russian Revolution is not merely the story of the Bolshevik Party and its supporters. Beneath the veneer of official events described by Soviet historians there was another, more basic development--the spontaneous movement of the workers and revolutionary peasants, which later clashed sharply with the bureaucratic policies of the Bolsheviks.

With the overthrow of the Tsar in February 1917, workers in virtually all the factories of Russia spontaneously established factory committees, staking out an increasing claim in industrial operations. In June 1917, an all-Russian Congress of Factory Committees was held in Petrograd which called for the “organization of thorough control by labour over production and distribution.” The demands of this Conference are rarely mentioned in Leninist accounts of the Russian Revolution, despite the fact that the Conference aligned itself with the Bolsheviks.

Leon Trotsky, who describes the factory committees as “the most direct and indubitable representation of the proletariat in the whole country,” deals with them peripherally in his massive, three-volume history of the revolution. Yet so important were these spontaneous organisms of self-management that Lenin, despairing of winning the soviets in the summer of 1917, was prepared to jettison the slogan “All Power to the Soviets” for “All Power to the Factory Committees.”

This demand would have catapulted the Bolsheviks into a completely anarcho-syndicalist position, although it is doubtful that they would have remained there very long.

In the Ukraine, peasants influenced by the anarchist militias of Nestor Makhno established a multitude of rural communes, guided by the Communist maxim: “From each according to his ability; to each according to his needs.” Elsewhere, in the north and in Soviet Asia, several thousand of these organisms were established partly on the initiative of the Left Social Revolutionaries and in large measure as a result of traditional collectivist impulses which stemmed from the Russian village, the mir.

It matters little whether these communes were numerous or embraced large numbers of peasants; the point is that they were authentic popular organisms, the nuclei of a moral and social spirit that ranged far above the dehumanizing values of bourgeois society.

The Bolsheviks frowned upon these organisms from the very beginning and condemned them. To Lenin, the preferred, the more socialist form of agricultural enterprise was represented by the State Farm: literally an agricultural factory in which the State owned the land and farming equipment, appointing managers who hired peasants on a wage basis. One sees in these attitudes toward workers’ control and agricultural communes the essentially bourgeois spirit and mentality that permeated the Bolshevik Party; a spirit and mentality that emanated not only from its theories, but from its corporate mode of organization.

In December, 1918, Lenin launched an attack against the communes on the pretext that peasants were being forced to enter them. Actually, little if any coercion was used to organize these communistic forms of self-management. The communes were not suppressed but their growth was discouraged until Stalin merged the entire development in the forced collectivization drives of the late ‘Twenties and early ‘Thirties.

By 1920, the Bolsheviks had isolated themselves from the Russian working class and peasantry. The elimination of workers’ control, the suppression of the Makhnovtsy, the restricted political atmosphere in the country, the inflated bureaucracy, the crushing material poverty inherited from the civil war years--all, taken together, generated a deep hostility toward Bolshevik rule.

We have discussed these events in detail because they lead to a conclusion that our latest crop of Marxist-Leninists tends to avoid: the Bolshevik Party reached its maximum degree of centralization in Lenin’s day not to achieve a revolution or suppress a White Guard counter-revolution, but to effect a counter-revolution of its own against the very social forces it professed to represent.

Factions were prohibited and a monolithic party created not to prevent a capitalist restoration, but to contain a mass movement of workers for soviet democracy and social freedom.

This incredible substitution of form for content is one of the most characteristic traits of Marxism-Leninism.

There can be no question that the failure of socialist revolutions in Europe after the First World War led to the isolation of the revolution in Russia. The material poverty of Russia, coupled with the pressure of the surrounding capitalist world, clearly militated against the development of a consistently libertarian, indeed, a socialist society. But by no means was it ordained that Russia had to develop along state capitalist lines; contrary to Lenin’s and Trotsky’s expectations, the revolution was defeated by internal forces, not by the invasion of armies from abroad.

Had the movement from below restored the initial achievements of the revolution in 1917, a multi-faceted social structure might have developed, based on worker’s control of industry, on a freely developing peasant economy in agriculture, and on a living interplay of ideas, programs, and political movements. At the very least, Russia would have not been imprisoned in totalitarian chains and Stalinism would not have poisoned the world revolutionary movement, paving the way for fascism and World War II.

The centralized party, a completely bourgeois institution, became the refuge of counter-revolution in its most sinister form. This was the covert counter-revolution that draped itself in the red flag and the terminology of Marx. Ultimately, what the Bolsheviks suppressed in 1921 was not an “ideology” or a “White Guard conspiracy,” but an elemental struggle of the Russian people to free themselves of their shackles and take control of their own destiny.

For Russia, this meant the nightmare of Stalinist dictatorship: for the generation of the Thirties it meant the horror of fascism and the treachery of the Communist Parties in Europe and the United States.