Wars as the Spark of Revolution

Karl Marx is always approached as so many thoughts, so many words. What connection is there between lived choices--one’s willful lifetime--and the presentation of one’s ideas? By 1846 Marx and Engels had written The German Ideology, which contains the full and mature ideas of the materialist concept of the progress of history. Along with this tome were the practical activities in politics. In terms of his Communist Correspondence Committee and its propaganda work, Marx (also in 1846) stated: “There can be no talk at present of achieving communism; the bourgeoisie must first come to the helm.” 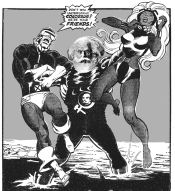 In June of the same year he sent instructions to supporters to act “jesuitically,” to not have “any tiresome moral scruples” about acting for bourgeois hegemony.

The inexorable laws of capitalist development, necessarily involving the sacrifice of generations of “insufficiently developed” proletarians, would bring capital to its full plenitude--and the workers to the depths of enslavement. Thus, in 1847, following a congress of professional economists in Brussels to which he was invited, Marx publicly noted the disastrous effect of free trade upon the working class, and embraced this development.

In a subsequent newspaper article, he likewise found colonialism, with its course of misery and death to be, on the whole, a good thing; like the development of capitalism itself, inevitable and progressive, working toward eventual revolution.

In 1847 the Communist League was formed in London, and at its second Congress later in the year, Marx and Engels were given the task of drafting its manifesto. Despite a few ringing anti-capitalist phrases in its general opening sections, the concrete demands by way of conclusions are gradualist, collaborationist, and highly statist (e.g., for an inheritance tax, graduated income tax, centralization of credit and communications).

Ignoring the incessant fight waged since the mid-18th century and culminating with the Luddites, and unprepared for the revolutionary upheavals that were to shake Europe in less than a year, the Communist Manifesto sees, again, only an “insufficiently developed” proletariat.

In April of 1848, Marx went to Germany with the Manifesto plus the utterly reformist “Demands of the Communist Party in Germany.” The “Demands,” also by Marx and Engels, were constituent of a bourgeois revolution, not a socialist one, appealing to many of the elements that directly fought the March outbreak of the revolution.

Considering Marx’ position as vice-president of the non-radical Democratic Association in Brussels during the previous year, and, naturally, his support of a prerequisite bourgeois ascendancy, he quickly came into conflict with the revolutionary events of 1848 and with much of the Communist League.

Marx helped found a Democratic Society in Cologne, which ran candidates for the Frankfurt Parliament, and he vigorously opposed any League support for armed intervention in support of the revolutionaries. Using the opportunist rationale of not wanting to see the workers become “isolated,” he went so far as to use his “discretionary powers,” as a League official, to dissolve it in May as too radical, an embarrassment to his support of bourgeois elements.

With the League out of the way, Marx concentrated his 1848 activities in Germany on support for the Democratic Society and his dictatorial editorship of the Neue Rheinische Zeitung. In both capacities he pursued a “united front” policy, in which working people would be aligned with all other “democratic forces” against the remnants of feudalism. Of course, this arrangement would afford the workers no autonomy, no freedom of movement; it chose to see no revolutionary possibilities residing with them.

As editor of the NRZ, Marx gave advice to Camphausen, businessman head of the provisional government following the defeat of the proletarian upsurge. And further, astounding as it sounds, he supported the Democratic Society’s newspaper despite the fact that it condemned the June 1848 insurrection of the Paris proletariat. As politician and newspaper editor, Marx was increasingly criticized for his consistent refusal to deal with the specific situation or interests of the working class.

Wars as the Spark of Revolution

By the fall of 1848, the public activities of Marx began to take on a somewhat more activist, pro-worker coloration, as the risings of the workers resumed in Germany. By December, however, disturbances were on the wane, and the volatile year in Germany appeared to be ending with no decisive revolutionary consequences.

Now it was, and only now, that Marx in his paper declared that the working class would have to depend on itself, and not upon the bourgeoisie for a revolution. But because it was rather clearly too late for this, the source of revolution would have to come, he divined, from a foreign external shock: namely, war between France and England, preceded by a renewed French proletarian uprising. Thus, at the beginning of 1849, Marx saw in a Franco-British war the social revolution, just as in early 1848 he had located it in war between Prussia and Russia.

This was not to be the last time, by the way, that Marx saw in the slaughter of national wars the spark of revolution; the worker-as-subject again fails to occur to Marx, that they could act--and did act--on their own initiatives without first having to be sacrificed, by the generation, as factory slaves or cannon fodder.

But from the early 1850s Marx had begun to spend most of his time in studies at the British Museum. From this time, he quickly jettisoned the relative radicality of his new-found militance and foresaw a general prosperity ahead, hence no prospects for revolution. The coincidence of economic crisis with proletarian revolt is, of course, mocked by the real history of our world. From the Luddites to the Commune, France in 1968 to the multitude of struggles opening on the last quarter of the 20th century, insurrection has been its own master.

The economic crisis Marx avidly awaited in the ‘50s had come and gone in 1857, awakening no revolutionary activity. But by 1863 and the Polish insurrection of that year, unrest was in the air-providing the background for the formation of the international Workingman’s Association. Marx put aside his work on Capital and was most active in the affairs of the International from its London inception in September, 1864.

Marx was elected to the executive committee.

Volumes could be written, and possibly have, on the manipulations of Marx within the International, the maneuverings of places, dates, and lengths of meetings, for example, in the service of securing and centralizing his authority. To the case of the ADAV could be added, among a multitude of others, his cultivation of the wealthy bourgeois Lefort, so as to keep his wholly non-radical faction within the organization. By 1867 his dedicated machinations were felt to have reaped their reward; to Engels he wrote, “we (i.e. you and I) have this powerful machine in our hands.”

Well-known, of course, is Marx’s negative reception to the rising of the Parisians; it is over-generous to say that he was merely pessimistic about the future of the Commune. Days after the successful insurrection began he failed to applaud its audacity, and satisfied himself with grumbling that “it had no chance for success.” Though he finally recognized the fact of the Commune (and was thereby forced to revise his reformist ideas regarding proletarian use of existing state machinery), his lack of sympathy is amply reflected by the fact that throughout the Commune’s two-month existence, the General Council of the International spoke not a single word about it.

It often escapes notice when an analysis or tribute is delivered well after the living struggle is safely living no longer. The masterful polemicizing about the triumphs of The Commune and Civil War in France constitute an obituary, in just the same way his book, The Class Struggles in France, did so at a similarly safe distance from the events he failed to support at the time of revolutionary Paris, 1848.

After a very brief period--again like his public attitude just after the 1848 through 1849 outbreaks in Europe--of stated optimism as to proletarian successes in general, Marx returned to his more usual colors. He denied the support of the International to the scattered summer 1871 uprisings in Italy, Russia, and Spain--countries mainly susceptible to the doctrines of anarchy, by the way. September witnessed the last meeting of the International before the Marx faction effectively disbanded it, rather than accept its domination by more radical elements such as the Bakuninists, in the following year. The bourgeois gradualism of Marx was much in evidence at the fall 1871 London Conference, then, as exemplified by such remarks as: “To get workers into parliament is equivalent to a victory over the governments, but one must choose the right man.”

In 1874, he wrote, “The general situation of Europe is such that it moves to a general European war. We must go through this war before we can think of any decisive external effectiveness of the European working class.” Looking, as ever, to externalities--and of course to the “immutable laws of history”--he contributes to the legacy of the millions of World War One dead, sacrificed by the capitulation of the Marxist parties to the support of war in 1914.

Refusing throughout his lifetime to see the possibilities of real class struggle, to understand the reality of the living negation of capitalism, Marx actively and concretely worked for the progress and fullness of capitalist development, which prescribed that generations would have to be sacrificed to it.

John Zerzan, a contributor to the FE since the late 1970s, hosts “AnarchyRadio,” Tuesdays, 7 p.m., PST, and streams at KWVA 88.1 in Eugene, Oregon. His web site is johnzerzan.net.

A full-length version of this article appeared in the October 1979 FE. It’s on our website at fifthestate.org/archive/299-october-22-1979/practical-marx/ The graphic was with the original.