The Society of the Spectacle Reconsidered
Good Marx or Bad Marx?

Debord gets good Marx for all this

The Society of the Spectacle by Guy Debord

For those interested in Situationist ideas, this is an auspicious time to reconsider Guy Debord’s The Society of the Spectacle, originally published in 1967. Ken Knabb’s recently revised translation is a valuable resource for the study of Debord and the Situationists. 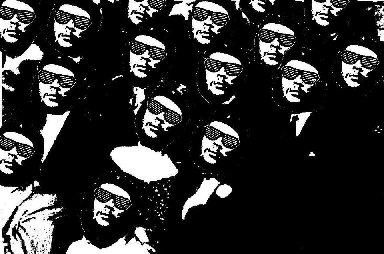 The Situationist International lasted from 1957 to 1972 and had an effect far greater than its relatively small numbers (about 70 members) would suggest. Situationism (a term the Situationists rejected, preferring to be ists without an ism) had its roots in artistic and cultural movements such as Dada, Surrealism, and Lettrism, and political movements such as Marxism, anarchism, council-communism, and utopian socialism.

Guy Debord and Raoul Vaneigem were the best-known figures, and Debord’s book and Vaneigem’s Revolution of Everyday Life are the most famous and influential works. Knabb, known for his translations of Debord and other Situationists, calls Debord’s text, “the most important radical book of the 20th century.

Knabb has not only improved his already very competent and readable 2004 translation, but has also added extensive and useful notes. Debord was sometimes vague about his sources, so Knabb has tracked them down, often adding helpful comments on their significance. Furthermore, he has included extensive background and bibliographical information on radical and revolutionary history. He also cites other Situationist texts on various topics, which is extremely useful, since there is an unfortunate tendency to equate all Situationist ideas with those of Debord.

Situationism reached many impasses, yet made a huge contribution to the development of radical thought. It still has crucial lessons for the left, and anarchists in particular. If the Situationists had done nothing else, it would be enough that they showed the fecundity of the encounter between Marxism and anarchism, and the folly of being naïvely and reactively “against Marx” in the name of anarchism. They show us why we need to be for Marx for the sake of anarchism, and against Marx for the sake of Marx.

After almost a decade of theory and provocation, the Situationists moved to the center of the political stage in 1966, when Situationist-influenced students at France’s University of Strasbourg published Mustapha Khayati’s historic text, On the Poverty of Student Life. It had a radicalizing influence on the student movement and foreshadowed the major social convulsion about to come.

Two years later, the Situationists, in alliance with the radical student group, the Enragés, emerged as a major force in the May-June 1968 French General Strike that mobilized over ten million people and nearly toppled the Gaullist regime.

They achieved lasting fame through their role in street fighting and occupation of the Sorbonne, and especially for their slogans and posters that covered the walls of Paris. Ones such as, “The more I make love, the more I want to make revolution,” and, their most famous, “Be realistic, demand the impossible,” still echo today.

The Situationists introduced a number of concepts that revolutionized the left’s imaginary landscape. They took up Marx’s idea of social alienation and developed it into what they called “the critique of separation.” Inspired by utopians like Fourier and by surrealism, they focused on the need for the total destruction of repressive forces and for the liberation of desire.

Their central theme was the dominance of the commodity in capitalism. They updated Marx’s idea of the fetishism of commodities, arguing that not only does the commodity become an alien force that dominates the human, the whole system of commodities fuses into an overwhelmingly powerful imaginary reality called the Spectacle.

Against this Spectacle they proposed the creation of “situations” that would be the “radical negation of the element of competition and separation from everyday life,” and would prefigure “the future reign of freedom and play.”

But what they did more concretely was called détournement, which means “diversion,” or, perhaps more pertinently, “embezzlement.” The idea is to appropriate something in a subversive manner, which they did most notably with comics. They substituted revolutionary slogans or absurdist comments in the speech bubbles of comic characters--and the rest is radical history.

Another major Situationist concept is psychogeography, which gave birth in practice to the tactic of psychogeographical exploration of the city through the dérive, or drift. A dérive is “a mode of experimental behavior linked to the conditions of urban society: a technique of rapid passage through varied ambiances.” This quest for the strange and the marvelous was to have a major influence on radical and avant garde cultural tendencies.

A final key Situationist idea is récuperation, or cooptation. Debord’s depiction of the Spectacle’s seemingly infinite powers of cooptation implicitly predicted what would inevitably befall the Situationists’ own ideas. As these were absorbed into consumer culture and academia, we would ultimately see neo-Situationoids busily accumulating cultural capital by (in their terms) “detourning” and “recuperating,” rather than subverting and coopting.

But Situationism is found today not only in the museum of cultural critique. It has also continued to shape radical politics. In France, it has had an important influence on the Tiqqun and the Invisible Committee groups and its mark is evident in their much debated texts like “The Call” and The Coming Insurrection.

In the U.S., the influential 2009 California student strike text, “Communiqué From an Absent Future,” echoes in some ways the radical critique of “The Poverty of Student life.” And CrimethInc, the American decentralized collective of autonomous cells, which has been a significant radicalizing force for many young anarchists, would be unthinkable without the Situationists.

The Society of the Spectacle remains a historic work for its highly advanced and sophisticated critique of both corporate and state capitalism. When the Situationists launched their critique of the Spectacle, both Marxist and anarchist thought were mired in obsolete analysis based on an earlier stage of historical development.

The Situationists were far ahead of the left in general, and the anarchists in particular, in shifting away from the one-sided focus on the repressive state, repressive productionist culture, and authoritarian ideology as the salient mechanisms of domination and instead highlighted the role of domination through commodity consumption and the consumptionist imaginary. Debord must also be given credit for his ferocious demolition of Leninism, which was only strengthened by his use of radicalized Marxian categories in his critique.

Debord gets good Marx for all this

Debord also deserves credit for his position on the key issue of popular power. When one reads Debord, one learns, perhaps misleadingly, that the Situationists placed all their world-historical bets on something called “Worker Councils.” Despite the term “worker,” they recognized the importance of organizations in both the workplace and in the local community.

Moreover, they defined the term council not as an elected representative body, but rather as a democratic, participatory assembly of workers or local community members that remains the true locus of power. Long before Murray Bookchin made his “libertarian municipalism” a big and supposedly novel deal, the Situationists presented a strong defense of the communal assembly as the key popular institution.

Here, they were both prior and superior, in that they stressed the importance of both workplace and community general assemblies, while Bookchin lapsed into an abstract idealist fetishism of the municipality. On this point, Debord deserves credit for pointing the way toward the needed synthesis of the most radically democratic aspects of the anarcho-syndicalist and anarcho-communist traditions.

But, there were from the beginning serious flaws in Situationist thought and practice. There quickly developed a “real split” between the critical dimension and the creative, transformative side, and this proved historically disastrous.

The Situationists seemed to think that an aesthetic and intellectual elite could focus on theory, critique and subversive adventures, while the proletariat could somehow be counted on to revolt--eventually. As a result of this split, the Situationist legacy has been on one side an extreme aestheticization, a non-engaged ironicism, a vanguardist cultural elitism, a Left spectacularism, and a depoliticizing cooptation by a sterile oppositional culture and by hip academia.

On the other side has been an activist tendency toward insurrectionism, groupusculism, hypermarginalization, and organization “at a distance” from the real life of the community and the real direction of history.

What was always missing in the highly masculinist Situationist image of revolt were the dimensions of community and care, and the positive moment of engagement in processes of social and ecological regeneration.

The Situationists negated the historical agency of women and indigenous and traditional peoples in particular, but they also gave little recognition to the creativity of the masses of people who live under the existing system of domination, neglecting the dimensions of personal and communal life that the spectacle does not succeed in colonizing. They present an image of a humanity that seems almost helpless in the face of the overwhelming power of the Spectacle, left only with the hope for the miracle of a revolution somehow triggered by radical critique and marginal projects of provocation, creative vandalism, and insurrection.

Despite this problematical legacy, the Situationist and Situationist-influenced texts offer indispensable lessons. As resounding calls for radical negation and uncompromising critique, they possess an energy and imaginary force that most of the left can’t begin to aspire to. They have inestimable value for their capacity to traumatize, to destabilize, to shake the reader out of the paralysis of the everyday, and to inspire.

Problems arise with the lack of direction or the misdirection that comes after the inspiration. But without the inspiration, we remain nowhere (the preferred destination under capitalism).

The strengths of Situationism--its critical and visionary power--comes in large part from its ability to cross-fertilize the anarchist and Marxist traditions. An awareness of the failures of Marxist theories of the state, party and class should not obscure anarchists understanding of the significance of Marx as a philosopher of liberation.

The Situationists’ development of his ideas of alienation, commodity-fetishism, and reification within an anti-authoritarian context, and their ability to think in terms of dialectical contradiction and radical reversal, demonstrates this significance quite strikingly.

I love the irony of big corporations’ raving (in the name of profit) about the virtues of The Society of the Spectacle: There are now three translations of the work in print, and it has penetrated the intellectual popular culture to a certain degree.

You can now find ads all over the internet that mindlessly repeat the same clichés about the book. A long blurb begins by touting the book as “the Das Kapital of the 20th century.” The major purveyors all agree totalistically with every last word of the long spiel.

Even Knabb’s claim that it is “the most important radical book of the twentieth century,” is a rather grandiose claim. Nevertheless, The Society of the Spectacle is somewhere up there with the most influential works, and one might certainly wish that it had actually left Lenin’s What Is To Be Done?, Mao’s Little Red Book, and Guevara’s Guerilla Warfare, in the dust.

John Clark is a writer, educator and communitarian anarchist activist in New Orleans, where his family has been for twelve generations. He teaches for Common Knowledge: The New Orleans Cooperative Education Exchange.

His most recent book is The Impossible Community: Realizing Communitarian Anarchism. He works on ecological restoration, permaculture and eco-communitarianism on an 83-acre land project on Bayou LaTerre, in the forests of coastal Mississippi. He is a member of the Education Workers’ Union of the IWW.