AnarchoShorts
...& Other Tales of the Planet 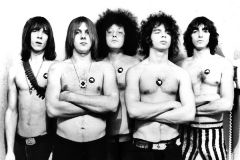 The MC5 from promotion photo for their debut album, “Kick Out the Jams.” (photo: Leni Sinclair)

It was fifty years ago this summer that the lead singer of a band from a working class Detroit suburb screamed into a mic, “Kick out the jams, motherfucker,” inaugurating a wild ride into rock history.

The music of the MC5, whose combination of rock and roll power, attitude, and connection to the revolutionary White Panther Party, made them, and their poet, marijuana advocate manager, John Sinclair, frequent targets for police suppression, arrest, and violence.

The band, which set standards for power rock and the punk movement to follow, bookended the opening and closing of Detroit’s legendary Grande Ballroom between 1966 and 1972 where they shared billing with rock and roll greats like the Who, Creem, and the late BB King.

The Five practiced in the basement of our Detroit Fifth Estate office while the staff laid out the then weekly paper which undoubtedly accounts for much of the hearing loss experienced by older FE members. The band also played for numerous benefits to support our publishing efforts.

Three of the original members, Rob Tyner, Fred “Sonic” Smith, and Michael Davis have passed away, but guitarist Wayne Kramer and drummer, Dennis Thompson, carry on the group’s spirit.

The MC5 are being honored this summer by a commemorative exhibit at the Lincoln Park Historical Museum in the suburb from which they hailed. Information at lphistorical.org. 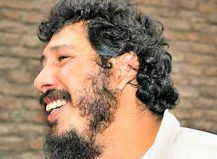 Che’s anarchist grandson, a rebellious writer, musician, photographer and talented graphic artist, as well as an anarchist, died during heart surgery in Mexico City on January 21 at age 40.

Born in Havana, as a teenager he became disgusted by the Castro regime’s persecution of artists, writers and others.

At 22, he went into exile in Mexico to fight what he called the Cuban “monarchy” led by the man he had known as “Uncle Fidel.”

Sanchez Guevara was active in the Cuban Libertarian Movement In Exile for many years, and wrote for Mexican anarchist publications such as Letras Libres and Milenio Semanal.

He asserted that the Cuban revolution had given birth to a socialist bourgeoisie and to repressive apparatuses for defending the bureaucracy from the people it claimed to represent.

He denounced “the criminalization of difference, the persecution of homosexuals, hippies, free thinkers, trade unionists and artists.”

In today’s Russia, any activist—anarchist, left-wing, or liberal—can be labeled as an enemy of the state and locked up. The authorities’ persecution of dissenters intensified after the Russian 2014 annexation of Crimea.

In May 2014, a 26-year-old Crimean anarchist, Alexander Kolchenko, was arrested, along with Ukrainian filmmaker, Oleg Sentsov, and two local activists, Gennady Afanasiev and Alexei Chirnii.

They are accused by the Russian security agency FSB of planning and carrying out what the authorities characterized as “terrorist attacks,” including setting fire to offices of pro-Russian political organizations. They face 20-year sentences if convicted.

The anti-authoritarian paper Open Road, published in Vancouver, Canada, between 1976 and 1990, is now available online for old friends and new readers. It was published by anarchist and anti-authoritarian veterans of the social insurgencies and counter-cultural movements of the 1960s and 1970s.

For a while, Open Road was the largest circulation English language anarchist publication in North America, with over 18,000 readers in 1980. However, by 1990 it lost a significant amount of readership and was no longer sustainable.

There is more about the paper and a selection of articles in Allan Antliff’s anthology, Only a Beginning (Vancouver: Arsenal Pulp Press, 2004). For more background, see Robert Graham’s Anarchism Weblog at: http://www.zisman.ca/openroad/index.html.

A 266-page, paperback, English version of Raoul Vaneigem’s latest text, Self-Portraits and Caricatures of the Situationist International (SI), has been translated by Not Bored’s Bill Brown.

As an active participant in the SI during the 1960s, Vaneigem’s descriptions are based on direct personal experience.

The book that made his reputation, The Revolution of Everyday Life, is a trenchant exploration of the potential for refusal and revolt in the subjective ordinary experiences of modern life. For many, it is as important as Guy Debord’s Society of the Spectacle. Vaneigem parted ways with the SI in 1970.

Those interested in learning more about the SI, which played such an influential role in the French insurrectionary activities of 1968, should read this book. Available from Colossal Books, P.O. Box 140041, Brooklyn NY 11214, or free online at notbored.org/caricatures.pdf