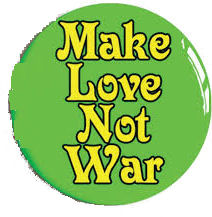 The original saying was created at Chicago’s Solidarity Bookshop, a “do-it-yourself-revolution project” of Roosevelt University anarchists and IWW members who decided to make an anti-war button. What came to mind was the old Fellowship of Reconciliation slogan “Make Peace, Not War,” but this didn’t reflect our thinking; it was too tame.

We sought more than peace. Tired of the repressive attitudes of the ‘50s, we wanted nothing less than “totally liberated desire.” Several of us working at the bookshop, Bernard Marszalek, Tor Faegre, Franklin Rosemont, and myself, decided to substitute “love” for “peace” and so it became the iconic, “Make Love, Not War.”

The button was printed at a shop above Kroch’s & Brentano’s Bookstore on Wabash Avenue. The layout and design were mine for the most part. Doing the curved type by hand letter-by-letter around the CND peace sign was tricky. The bookshop was in touch with London’s Freedom Press and knew about the Committee for Nuclear Disarmament’s activity through its great little mag, Anarchy, edited by Colin Ward.

Though the button was made for a Mother’s Day peace march in Chicago, it was sex, not motherly love that was on our minds. We were influenced by Emma Goldman’s idea of Free Love, the Marquis de Sade’s concept of sexual freedom, the Mad Love of surrealism, Herbert Marcuse’s Eros and Civilization, and Wilhelm Reich’s theories on sexual repression and fascism. We were not thinking of religious love either; we were all atheists and militantly anti-religious.

For us women, the invention of birth control and the greater availability of information about sexuality was indeed a Revolution. For the first time in history women could enjoy worry-free sex. Part of the amazing joyousness of that time of war and social dislocation was due to greater sexual freedom. When you glance at the photos of the time, it seems like one big party.

Interestingly, Creative Review, an advertising, design and visual culture journal, places “Make Love, Not War” as number 4 in its top twenty slogans and points to “Chicago not just as the birthplace of ‘Make Love Not War,’ but also explains how the simple, cheeky phrase spread from a Chicago bookshop to placards around the world...[I]t was they who appear to have done most to popularize its use.”

Others claimed the slogan, as well, and it would not be the first time in history that simultaneous discovery occurred. Diane Newell Meyer, a University of Oregon student at the time, says she wrote, “Let’s make love not war,” on an envelope and pinned it to her sweater before attending a demo in April 1965.

Besides distributing the “Make Love, Not War” buttons at that Mother’s Day march, the Solidarity Bookshop anarchists circulated them and the slogan through our mimeo’d Wobbly mag, the Rebel Worker; through Resurgence, the new York City paper edited by Jonathan Leake and Walter Caughey; and through Bruce Elwell and the Green Revolution. Through Rebel Worker we were in touch with underground newspapers across the country and wrote for Radical America.

We also sold buttons at the Mole Hole, a Chicago button shop at North and Wells, a destination for young people leaving mid-western small towns and hitch-hiking across the country in search of a Kerouac “On the Road” experience. Mole-Hole founder, Earl Siegel, founded The Chicago Seed.

One of our good friends, Lester Dore, also worked on the Seed and put the slogan into his weird and wonderful ‘60s graphics. Buttons were distributed by us at demos in Chicago and Madison, and Be-Ins in New York and at radical bookstores all over the country.

Lester Dore, Robert Green, Franklin and I all went to Europe in 1965–66. Franklin and I visited anarchists and surrealists in London and Paris, including André Breton. Wherever we went, we wore buttons we had made with various slogans.

The Revolt of 1968 brought the slogan, “All Power to the Imagination” to the walls of Paris and the eyes of the world surrealist inspired. Between “Make Love, Not War,” and “All Power to the imagination!” expressions of ecstatic revolt and marvelous freedom, an anarchist way of life is expressed, one that demands everything!