The Rojava Revolution
Worth fighting for; a fight worth being in solidarity with

On May 17, military forces of the Islamic State in Iraq and Syria (ISIS) captured Ramadi, Iraq, and with it another huge stock of US-supplied modern weaponry. Six thousand US-trained Iraqi soldiers fled the city without putting up much of a fight. The ISIS force was considerably smaller and reliant on waves of suicide car bombs for its final attack. It’s not hard to see why ISIS has been successful in establishing the idea that it is an unstoppable force carrying out their god’s will. 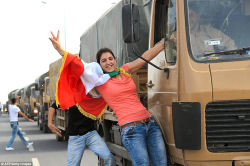 A Kurdish woman from Turkey on a peshmerga military vehicle

But the same day, to the northwest ISIS suffered yet another major defeat at the hands of the YPJ and YPG (armed Kurdish women’s and men’s militias) in Rojava, or Western Kurdistan, a now de facto autonomous region in northern Syria.

These fighters, unlike the Iraqi army, are almost starved of heavy modern weaponry. Photos circulate online of self-constructed armored vehicles, often tractors with steel boxes bolted on, that for all intents and purposes are identical to the home made anarchist armor of the 1930s Spanish Revolution. They are no match for ISIS’s captured US armor.

A week earlier I was in Turkey on a holiday that was also an opportunity to meet up with Turkish anarchists and get their perspective on the most controversial aspect of the Rojava revolution, the apparent transformation of the PKK (Kurdistan Workers Party) from an authoritarian, centralized, militaristic party, to a force for popular grassroots democracy. I’d heard reports of this conversion since the mid-2000s from anarchists in Turkey and other anarchists visiting the country, but initially, I hadn’t taken them seriously.

However, the sudden emergence and expansion of ISIS changed this. ISIS troops were about to overrun some place called Kobane, a predominately Kurdish city on the border between Syria and Turkey. Photographs, interviews, and video coming from there showed that many of the defenders were women.

Not just women, but women who spoke of an alternative society in terms of grassroots democracy, gender liberation, and environmentalism. And, not just women in a token role for the camera, but entire military companies of women who clearly knew how to use their weapons and fight as a unit.

It became clear that what was happening in Rojava was quite remarkable. I’d simply hoped for an opposition to ISIS that was not another US proxy army, something with a basically democratic politics. It soon became apparent, however, that what was being advocated and implemented in Rojava was well in advance of anything revolutionaries in the West are currently in a position to contemplate.

How was this possible? Where had it come from? What we are seeing in Syria and Iraq is the clash of three ideologies. One is the West’s imperialist policies in the region, militarized neoliberalism: the Middle East shall remain a vassal region for energy extraction.

The second, the motivation of those who fight for ISIS, is complex. At the simplest level, it is religious ideology that provides the cement, the conviction that they are doing god’s work on earth makes their lives almost incidental in comparison with the promise of heaven. And as with most religious fanaticism, this makes the most brutal butchery of those who don’t toe the line not only justified, but desirable.

At Mosul in Iraq and in Ramadi, the government armed forces, motivated mostly by paychecks, makes for poor soldiers. Give them the best of weapons, advanced command and control facilities, American advisers, and untouchable US air support, and the soldiers still decide they are not being paid enough to risk becoming bit-part players in the next ISIS murder video.

ISIS, on the other hand, has no problem convincing over a dozen people to drive explosive-laden vehicles at enemy positions where they detonate the bombs and themselves.

In the aftermath of ISIS’s similar capture of Mosul and Tikrit last year, they seemed unstoppable. Then these fanatics met the new women of Kobane. Although most of the Kurdish defense forces are men, for this discussion it is the women who are central to the differences in ideology.

The third ideology is embodied by the YPJ and YPG resisters. They are fighting for liberation at the same time as they are fighting reaction. Not only are they fighting to avoid being enslaved or raped and beheaded by ISIS soldiers, they are also struggling to transform their socially repressive society. This is what motivated perhaps hundreds of Kurdish women to face a near certain death and worse in the front lines against ISIS last year, carrying only AK 47 rifles.

In late autumn, ISIS forces approached the YPG and YPJ positions in the countryside using the captured armor which rendered them almost invulnerable. Videos reveal ISIS tanks driving fearlessly up and down in front of YPG/J fighters who could only crouch in the ruins of houses and hope for a lucky shot.

When ISIS reached the city of Kobane, having rapidly conquered the entire canton, it seemed that the fighting could not last long. The city is comparatively small and overlooked by Mistanour Hill, which ISIS rapidly took despite a heroic defense by the YPJ. But, suddenly the advance was halted and Kurds began to compare their resistance to that of besieged Stalingrad during World War II. After 130 days of fighting, they repelled ISIS and eventually chased them out of the area.

One explanation for the military success is the change of US policy. When Kobane looked doomed the US dropped weapons for the Kurdish forces and carried out air strikes against ISIS positions. Still, it does not explain why ISIS is being driven out of Rojava even as they advance elsewhere in Syria and Iraq.

The explanation is on the terrain of ideology. Those fighting ISIS in Rojava are fighting for something that is worth dying for, not monthly pay packets. This is why many other fighters have come across the border to fight with the Kurds. During the siege of Kobane, supporters were going to what looked like an almost certain death, and many, in fact, were killed.

Anarchists and others in Turkey aided Kobane despite the considerable risk of Turkish government repression. As I write in late May, four people have just been arrested in Istanbul during a Construction Workers Union protest calling for safe passage to Kobane.

The key to understanding what is happening in Rojava is that it is not simply part of global capitalism, but a region where tribal-feudal structures of domination still exist. Class conflict is often as much anti-feudal in character as anti-capitalist.

This understanding is central to the prominent role gender liberation plays in the revolt. The strength of tribal-feudalism in Kurdistan revolves around the ability of powerful men to dominate women and other men through arranged marriages and so called honor killings.

An example of what they are fighting for and against helps define both the gender liberation aspect of the revolution and the tribal-feudal aspects of their society. The women’s organization Yekîtiya Star says it is “autonomously organized in all walks of life, from defense to economy to education to health.

Autonomous women’s councils exist parallel to the people’s councils and can veto the latter’s decisions. Men committing violence against women are not supposed to be part of the administration. Gender-based discrimination, forced marriages, domestic violence, honor killings, polygamy, child marriage, and bride price are criminalized”

The publication of the Zapatista’s EZLN Women’s Revolutionary Law in 1994 had a strong impact on women revolutionaries in Kurdistan who face many of the same oppressions. This was part of the story of why women militants of the PKK started to push for their own organizations and their own command structure in the military. Gender liberation is not an aspect added on to impress western radicals, but fundamental to transformation of their society.

Something worth fighting for and a fight worth being in solidarity with.

Andrew Flood is an anarchist writer, speaker and organizer who is currently the national secretary of the Workers Solidarity Movement. His activity has covered nearly four decades on issues which included unions, community organizing, LGBTQ, pro-choice, anti-imperialist, environmental, anti-racist, international solidarity, squatting and other struggles. He’s written about 400 articles and 300 blog posts on these topics which can be found archived on the Anarchist Writers site at http://anarchism.pageabode.com/

“Challenging the Nation State in Syria”

“How the American Left Abets Genocide in Syria”