As I wandered through Albania a few months ago, as unlikely a place as any during a six-month journey around the planet, a friend emailed a link to “Anarchist Traveling vs. Tourism.” *

The comments mostly reminded me that I’m not attempting an anarchist tour, whatever that might mean. I’m not looking constantly for political insurrection or utopian experimentation even though, inevitably, my anarchist lens focuses on signs of inequality and resistance, cops and soldiers, graffiti and posters (the circle-A, everywhere in Athens, is absent here in Oman).

I read local news, look for infoshops and protest. Still, while lenses sharpen focus, they also create limits, blurring whatever’s outside their range. I want to see into the blur and bring into view things that any preselected lens might obscure. 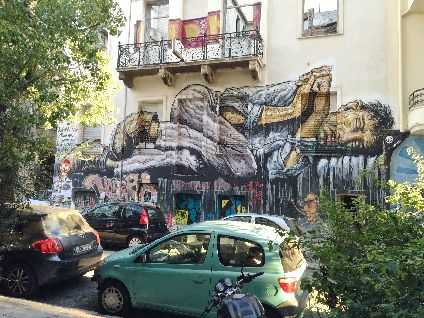 And, everywhere I go, I run into borders both political and personal.

What brought me to Europe last fall was a conference in Budapest on the historical and cultural implications of radical psychology and psychoanalysis. My only post-conference plan was to make my way towards an April family visit in Okinawa.

My route south through the Balkans and then east has been shaped by curiosity and spontaneity, but also by weather, cost, my energy level, and sometimes by visa complexities preventing last-minute border crossings. I move from one country to the next when it feels like it’s time, by bus or train when I can, watching the countryside slide by and the rhythms of local passengers sitting nearby.

At borders, I show my passport, answer questions, switch currencies. I try to remain most places long enough to not feel pressed to run out everyday to one more must-see destination. To stay in apartments where I can cook. Meandering at times through towns and neighborhoods where tourists don’t often go, I try to take photos without being obnoxious, which sometimes means not taking them at all.

Crossing borders expands my sense of the world. Seeing one old fort or walled city after another gets repetitive, but their presence almost everywhere highlights thousands of years of shifting power. A visit to the Hungarian National Museum clarifies central European migration, dominance, and resistance since long before Rome controlled the heights of Buda overlooking Pest across the Danube.

I understand Yugoslavia’s creation and disintegration better after visiting Belgrade, and then taking a long train ride to Podgorica, Montenegro’s capital. In Albania’s capital, Tirana, a professor quoted in the news about political change, organized crime, and tribal justice gave me his take on historical incursions into Muslim Albania by Christian Serbia to the north and Greece to the south. The city’s Fuck Serbia graffiti is more blunt, helping make sense of a chatty engineering student’s earnest comment that, “We respect George Bush,” for supporting Kosovo, culturally and historically Albanian.

Comrades in Athens arranged for me to talk about anarchism and psychology a few blocks from where Syrian and other refugees sleep in Victoria Square. One showed me around Exarchia, the city’s anarchist center, where a new squat had just opened up to support refugees, and where, they tell me, cops don’t go except in force.

A couple of weeks later in Tel Aviv, I stayed with a comrade from Anarchists Against the Wall and later joined a West Bank peace march—not an anarchist action like others I’ve been to in Palestine, but still a crossing of borders, including some of my own.

Most Muslim countries bar anyone whose passport shows a visit to Israel, but that’s no longer true here in the eastern Arabian Peninsula. The United Arab Emirates and the Sultanate of Oman, ruled by hereditary monarchs, may not be as bluntly controlling as Albania used to be, but even with a benevolent face they’re the most politically repressive and culturally traditional places I’ve ever been.

In the UAE, a rich country boasting Dubai’s massive eye-catching architecture and artificial islands shaped like palm trees, life is good for Emiratis, at least for those unbothered by the risk of prison, flogging, perhaps amputation or death for transgressing law or custom. But 85 percent of the residents are foreigners, more than half from India, Pakistan, and Bangladesh, working here for years before returning home.

In Oman, with less oil than the UAE, most Omanis have ordinary jobs, but the economy depends on foreign labor. The streets in my Muscat neighborhood have a decidedly non-Arab vibe. Restaurants tout biryani, tandori, and curry, kids play cricket, and wall postings advertise apartments for “Indian executive bachelor” or room shares for “Pakistani Muslims only.” It’s as if Emiratis and Omanis have colonized the Indian subcontinent by bringing the population here.

Along with adjusting my sense of the world, crossing geographic borders challenges my sense of myself. One lesson I absorbed growing up in 1950s Brooklyn was how lucky I was to have been born into the best of all possible worlds—not only the best country, and the best borough of the most important city, but I was also white, Jewish, a boy.

What could be better?

I couldn’t imagine being anything like me if I’d been born in Africa, or a girl, or Catholic. And sure, over the decades I overcame much of that internalized specialness, understood better the distortions of my childhood lens. So, it’s confusing—disappointing—that when I pass a woman completely covered in black except for her eyes and hands, looking down at her iPhone, my first reaction is to stare, surprised. Surprised by someone using an iPhone!

Maybe I cross borders not to discover the exotic but to discover myself. To normalize difference, but even more to normalize similarity. This reminds me of my first visit to Ramallah, Palestine in 2005, when I took pictures of hardware stores, schools, families walking to restaurants. It seemed important to record that Palestinians weren’t all destitute refugees or armed fighters, but people like us. Like me.

Elsewhere, I’ve written about dipping into the personal growth world over the past few years, which for most of my life I dismissed as a distraction; this was my topic at the October Budapest conference. Early anarchists wrote that political and personal change depend on each other.

In practice, though, anarchist projects often fail, groups lose members or fall apart, because we don’t learn well enough how to work through tensions, or we don’t want to bother, or we think that learning “better ways to communicate” or “how to express empathy” is just New Age psychobabble designed to undercut political action.

There’s something to that, and, indeed, my work in critical psychology examines how mainstream psychology strengthens the status quo. But still: when we behave in ways we don’t want to—competitively, possessively, jealously, selfishly—we don’t always have enough insight into ourselves, or enough skills, to make things right.

People sometimes talk about trying to find themselves—to establish a firm identity. In the same way that national and religious borders mark who’s in and who’s out, internal borders reflect who we are and who we are not. There’s comfort in that. Belonging. Focus.

But there’s also benefit in the opposite, in a sense losing ourselves for a time. Softening a hardened self-image lets new possibilities emerge. Instead of sharp lines between Known and Other we can try to set aside our quick judgments, old likes and dislikes, and use our internal borders as invitations to explore broader regions.

This can be hard. Discovering internal barriers I didn’t even know I had, moving through them without knowing what to expect on the other side, has sometimes been scarier than crossing through passport control into potentially dangerous territory. Both can be disorienting and uncomfortable, bringing out old anxieties, reminders of work still to be done.

Some approaches to internal exploration grow out of Buddhism, Tantra, and other perspectives on self and connection that teach putting aside assumptions and goals and learning to be in the moment, to appreciate slowness in every realm from cooking and eating to touch and sex.

Right now, I’m exploring Miksang, a Buddhist perspective on photography and perception emphasizing simplicity, seeing what’s really there instead of whatever our internal lenses predispose us to see. Other approaches, traced back to radical psychology and psychoanalysis, owe much to Wilhelm Reich’s work on sexual repression and personality development.

Intentional communities I’ve visited on earlier trips to Germany (ZEGG) and Portugal (Tamera), insisting that their emphasis on sexuality and relationships is fundamental to their work for global peace, use regular group forums to address the emotional complexities of reshaping old habits, revealing inner tensions otherwise left to fester. There’s a lot of cross-fertilization out there.

Sitting here in Muscat, the capital of Oman, the anarchist and personal growth worlds both feel distant as the Call to Prayer wafts in from the mosque down the street. I don’t understand the words, and if I did maybe my anarchist lens would object.

In this particular moment, though, I’m enjoying the chant.

Dennis Fox, mostly based in Boston when he’s not traveling, posts political/academic work at dennisfox.net and photos at dennisfoxphoto.com.