Challenging the Nation State in Syria

Syria’s current borders were drawn up by imperial map makers a hundred years ago in the midst of World War I as part of a secret accord between France and Britain to divide the Mideast spoils of the Turkish Ottoman Empire. As the colonial state gave way to the post-independence state, power was transferred from Western masters to local elites. 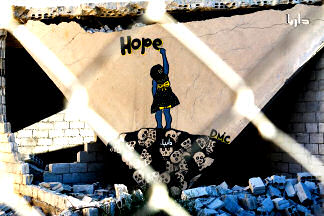 Hope amidst the wreckage in Daraya, Syria

The three major discourses which grew out of the anti-colonial struggle—socialism, Arab nationalism, and Islamism—all fetishized the idea of a strong state as the basis of resistance to Western hegemony. In the case of Syria, it led to the emergence of an ultra-authoritarian regime where power is centralized around one man in Damascus, Bashar al-Assad, bolstered by the state bureaucracy, and security forces. But today, new ways of organizing have emerged which challenge centralized authority and the state framework.

During the course of the revolution against Assad that began in Syria in 2011, land was liberated to the extent that by 2013 the regime had lost control over some four-fifths of the country. As the state began to disintegrate, communities needed to build alternative structures to keep life functioning in the newly created autonomous zones.

The model which emerged was based on the vision of Syrian anarchist Omar Aziz, who produced a paper in November 2011, in the eighth month of the revolution, advocating the establishment of local councils.

He argued that it is inconsistent for revolutionaries to participate in protests by day and then return to living within the hierarchical and authoritarian structures imposed by the state. Aziz believed that revolutionary activity should permeate all aspects of life and advocated for radical changes to social relationships and organization.

He called for autonomous, non-hierarchical organization and self-governance, based on principles of cooperation, solidarity and mutual aid. He envisaged the councils as being horizontally organized grassroots forums through which people could work together to achieve three primary goals: to manage their lives independently of the state; collaborate collectively; and initiate a social revolution, locally, regionally and nationally.

Together with comrades, Aziz helped establish the first local council in Zabadani, followed by others in the Syrian cities of Barzeh, Daraya and Douma.

Tragically, Aziz was arrested in November 2012 by Assad regime intelligence agents and held in the infamous Adra prison where he died three months later. Shortly before his death he declared, “We are no less than the Paris Commune workers—they resisted for 70 days and we are still going on for a year and a half.”

Hundreds of local councils have spread throughout Syria, bringing power down to the community level. These are civil administrative structures, and most have selected their members through democratic elections or popular consensus—something unheard of under Assad totalitarianism. Some hold elections every 3–6 months to recall representatives who are not performing well and decisions on issues are taken by majority vote.

They comprise revolutionary activists, professionals and representatives of large families or tribes. In most cases, they retain their independence from political and military factions, and in mixed communities such as in Yabroud, Selemmiyeh and Manbij, local councils included representatives of different ethnic and religious groups.

In the absence of the state, it’s the local councils which continue to provide water, education and healthcare to local communities. They’ve set up alternative sources of energy, such as solar power, and grow food to fight off starvation in communities under siege.

These experiments in self-organization are caught in a complex web of challenges. The liberated areas have been the main target of Assadist (and more recently Russian) airstrikes, in an attempt to crush any alternative to the regime.

The relentless assault has contributed to the depopulation of these areas and sent waves of refugees seeking safety abroad. Militarization of the uprising, which was on the rise in the summer/fall of 2011, transformed it from a horizontally organized, inclusive and non-sectarian movement into a struggle amongst numerous competing authoritarian factions attempting to assert their hegemony and deny liberated communities self-determination.

The clearest examples are some of the more extreme Islamist factions which have tried to wrest control away from the local councils and impose their own parallel structures, such as Shura Councils and Sharia courts, despite popular protest in areas where this has occurred.

These groups remain part of the armed anti-Assad struggle (and now, with the military involvement of imperialist powers, part of the struggle against foreign occupation) as well as the fight against Daesh (ISIS). But they’ve never been part of the Syrian people’s struggle for freedom, social justice, and self-determination. They seek to replace one authoritarian state with another.

The provincial-level councils are often linked to the Syrian National Coalition (the opposition in exile), which in turn is influenced by the agendas of foreign powers, primarily the West and reactionary Gulf states. Subject to politicized funding, their grassroots democracy is compromised. Other challenges exist on the societal level.

Syrian society is highly patriarchal—through the family, the tribe, and the nation state. Few women are local council members, despite the prominent role of women in such revolutionary groupings and civil society organizations as the Local Coordination Committees, or the numerous women’s centres in liberated areas. These support women’s activism and their involvement in the political, economic, and social spheres as a means of challenging traditional patriarchal structures.

In the Kurdish regions of the north, the social revolution has been much more inclusive of women. Three non-contiguous Kurdish cantons (Jazira, Kobane and Afrin) declared democratic autonomy in January 2014, each establishing a parliament (chosen by appointment), various ministries and courts.

Together the three cantons comprise Rojava, which is largely led by the Kurdish Democratic Union Party (PYD). The PYD has been heavily influenced by the ideas of imprisoned Kurdistan Workers’ Party (PKK) leader, Abdullah Ocalan, who in turn was influenced by American anarchist Murray Bookchin and espouses the idea of democratic confederalism.

Based on the principles of direct democracy, gender equality and ecology, this idea directly challenges the notion of the nation state, instead calling for regional autonomy and promoting self-organization and self-governance.

Throughout Rojava the communes are the forum through which people come together to find solutions for their needs and the challenges they face. Each commune has various committees attached to it to deal with issues such as education, justice, food supply, ecological issues and self-defense. Decisions are made on the basis of consensus.

The communes are linked to district councils made up of commune representatives and political parties and (like the communes) have a 40 percent quota for women. These are then linked to the canton administration through various mechanisms which coordinate between the councils and the regional government of Rojava.

Unlike other areas of Syria, Rojava has largely been spared the scorched earth policies of Assad and his allies, allowing these liberated areas greater opportunity to develop and flourish.

Yet they also face a number of challenges. Despite its libertarian rhetoric, the PYD, which dominates the Self Administration, is an authoritarian party which has silenced, arrested, imprisoned, and assassinated other Kurdish opposition groups and members.

The People’s Defense Units (YPG), dominated by the PYD, and the American-backed Syrian Democratic Forces (dominated by the YPG) have recently been carrying out offensives into Arab majority areas under cover of Russian air-strikes. This looks like an attempt to link up the cantons in a state building project which goes against the idea of democratic confederalism and risks Kurdish-Arab inter-ethnic conflict.

The Kurds themselves face repeated assaults by the authoritarian Turkish state which aims to crush Kurdish aspirations to self-determination both in its own borders and within Syria. They also face assaults by extremist Islamist groups, primarily Daesh, the Al Qaeda-linked Jabhat Al Nusra, and Ahrar Al Sham.

Throughout Syria, oppressive and hierarchical structures and institutions have been broken down and people are freely organizing and self-managing their communities. Nowhere has there been a greater challenge to the concept of the nation state since the Spanish Revolution and Civil War in the late 1930s.

But as shown above, these experiments in community autonomy are under increasing threat from many quarters. Due to the strength of the counter-revolution, what may occur with the collapse of the Syrian state, is the imposition of yet more mini-states, fortified by guns, razor-wire fences and sectarian rhetoric, creating further divisions and a state of perpetual war.

Solidarity with Syrians in their struggle is vital. Yet at times, many groups that identify as being part of ‘the left’ have not only failed to stand in solidarity with revolutionary Syrians, but have given savage support for counter-revolution. This often stems from ignorance about Syria’s context, generalizing Orientalism and rising Islamophobia.

Many have failed to see or understand the huge diversity of actors who are engaged in struggle at the current time, actors who sometimes share similar aims (such as the overthrow of the regime), but have very different end goals.

The revolution faces many challenges, and no one should be fooled into thinking that a free society will be the result. States and the counter revolution are much stronger than we are. Yet in face of such challenges, anarchists should stand with the exploited and oppressed, with those who are creating new ways of organizing in the most difficult of circumstances and those who are currently facing annihilation.

Practical solidarity will be more fruitful than misinformed theoretical hectoring.

Leila Al Shami is co-author, with Robin Yassin-Kassab, of Burning Country: Syrians in Revolution and War, Pluto Press (2016). She has worked with the human rights movement in Syria and elsewhere in the Middle East.

She is a founding member of Tahrir-ICN, a network connecting anti-authoritarian struggles across the Middle East, North Africa and Europe. She lives in Scotland and blogs at leilashami.wordpress.com.

“The Rojava Revolution: Worth fighting for; a fight worth being in solidarity with”

“How the American Left Abets Genocide in Syria”